An impressive but unadorned Antiphonal preserved at the Library Company of Philadelphia, MS 19, contains almost no provenance information internally, except for a label on the front pastedown stating (in handwriting) that it was presented by a certain “Dr. Wickersham,” and that it was given the Library Company shelf mark “2585 F.” Because there is no existing authoritative catalogue of the Library Company’s manuscripts, very little additional information can be associated with the book. It is described in the Supplement to the De Ricci census of manuscripts in North America as “Written in Spain, ca. 1500. Bound in orig. calf over wood boards, with metal bosses and corner-pieces,” but the prior provenance simply repeats the information on the label and the old shelf mark: “Presented by Dr. Wickersham (2585.F).”1 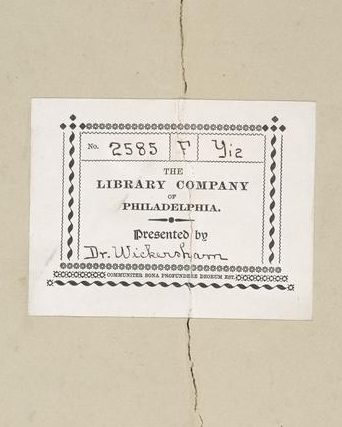 There are several possible candidates for who this Dr. Wickersham might be.2 At first I thought it could be James P. Wickersham (1825–91), a noted leader in education reform and schooling in Pennsylvania. Lafayette College in Easton, Pennsylvania, awarded Wickersham an LL. D. in 1871, so he definitely qualified as doctor later in life. He was also the US chargé d’affaires in Denmark in 1882, which might have given him the opportunity to purchase such a manuscript in Europe.

Another figure from this sprawling Pennsylvania family who might fit the bill is James Pyle Wickersham Crawford (1882–1939), who was a professor of Romance languages in the University of Pennsylvania, and a specialist in Spanish literature. After his death, May Wickersham Crawford presented her husband’s collection on the study of sixteenth- and seventeenth-century Spanish fiction and poetry to the University of Pennsylvania and endowed a fund for the acquisition of materials in the Romance languages. Might Wickersham Crawford have decided during his lifetime that this antiphonal from Spain, which doesn’t exactly qualify as literature, would be a good fit for the Library Company’s collections?

Some further sleuthing in the records of the Library Company, however, reveals that it was neither of these individuals who gifted the Antiphonal. The style of the label is typical of that used in the 1870s and 1880s by the Library Company, disqualifying Wickersham Crawford. As it turns out, the Bulletin of the Library Company for July 1883 includes a description of what would first appear to be this manuscript within a “List of the More Important Books Added since January, 1883,” under the subheading “Illuminated MSS etc.” The manuscript is described as a “folio choir book” having been “brought back from Italy by Dr. Morris S. Wickersham,” yielding us the precise identity of this mysterious donor. Apparently, the manuscript was “thought worthy of being put in a glass case at the Ridgway Branch [the Library Company’s impressive neoclassical building on Broad Street], as a notable example of Italian ecclesiastical art in the Middle Ages,” alongside other manuscripts from diverse cultures, already in the collections of the Library Company. 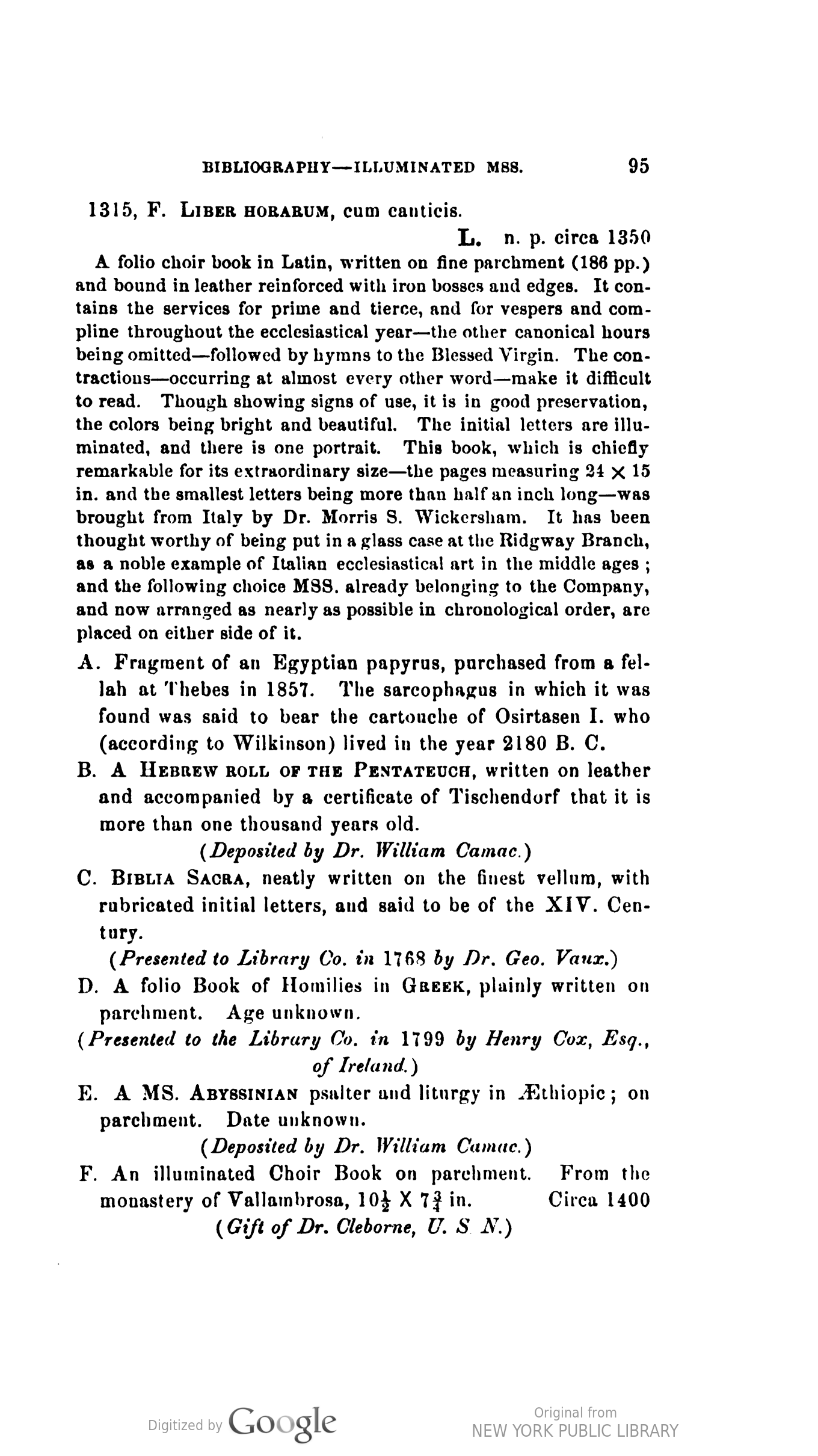 Morris S. Wickersham (1815–83) was a Philadelphia Physician, somewhat less renowned than the other Wickershams mentioned above. The details of his life are relatively scarce, but his presence in Italy is confirmed by a letter he wrote to the medical journal The Lancet in early 1881, signed from Ferrara. Further, a report from 1887 records a posthumous donation to the College of Physicians of Philadelphia of a “very curious and valuable collection” of books that he had assembled in Italy.3 Indeed, two manuscripts now in that institution were formerly in his possession: College of Physicians MS 10a 131 and MS 10a 132.

However, there is a problem, as the manuscript described in the Bulletin of the Library Company list of 1883 is said to have 186 pages (or 93 folios), contain one illuminated letter with a portrait, and bear the shelf mark “1315 F.” This description matches up precisely with another antiphonal in the Library Company, MS 7, which lacks a label with Wickersham’s name and was described as being part of the Loganian Library in the original de Ricci Census,4 suggesting that it arrived at the Library Company much earlier in the nineteenth century. So what happened? In the 1883 list, immediately preceding the Antiphonal, two other new manuscript acquisitions are briefly described, without provenance. The first one refers to yet another Antiphonal, Library Company MS 16 (which has not been digitized on account of its size and condition). The second one refers, seemingly, to our Antiphonal, MS 19, as the dimensions match up very closely. However, the shelf mark, “7136. F,” is completely different. Were all three manuscripts gifts from Morris S. Wickersham, even if our MS 19 is the only one with a label? Was the label misapplied to our manuscript when it should have been affixed to MS 7? Or was MS 7 mistakenly described as being a gift from Wickersham when it had instead come to the Library Company much earlier? Such queries demonstrate how provenance research can often yield more questions than answers, and also how labels and published descriptions should never be considered foolproof. 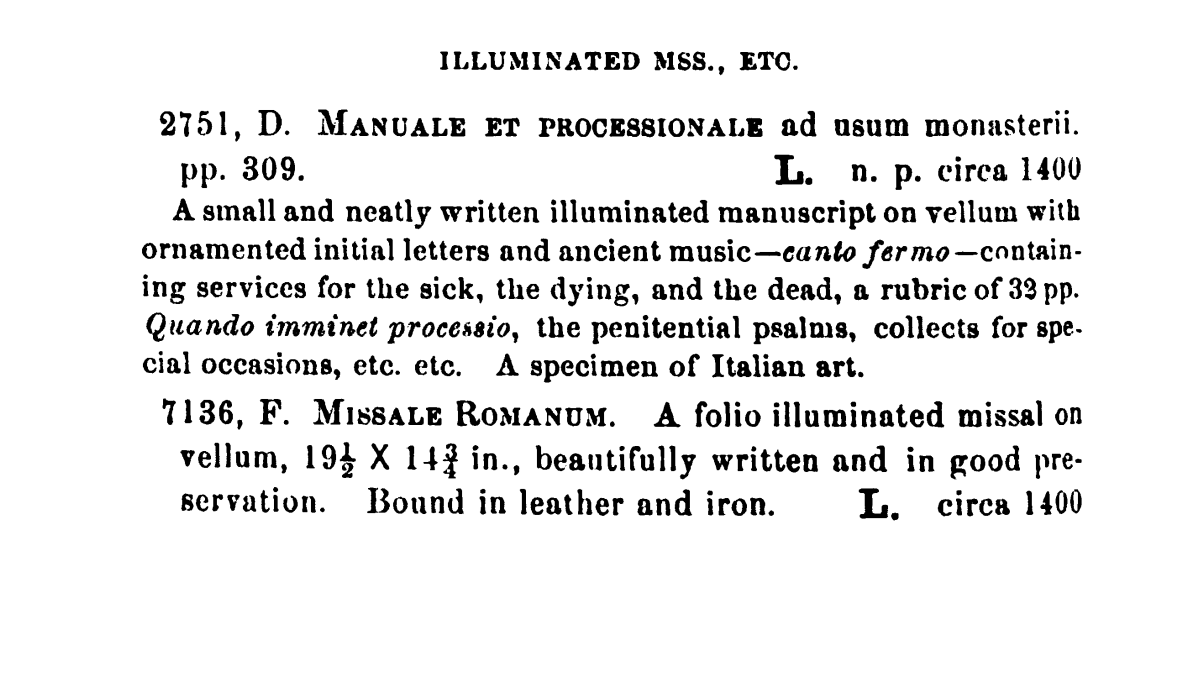