Though the manuscript was thus proudly trumpeted upon its arrival on the Main Line, its significance has been largely ignored in the decades since. The book is one of only three primary witnesses of a an account of an eight-and-and-half-month pilgrimage from France to the the Middle East and back undertaken by Pierre Mésenge of Rouen in 1507, in the company of a group of associates. Following a preface that exhorts the Christian reader to visit the Holy Sepulcher and the other sites of the Holy Land, the fascinating narrative begins with the departure of Mésenge, a priest and canon, together with the priests Jacques Masselin, Jacques de La Chesnaye, and Jean Chauvin, and the merchants Nicolas Masselin, Jean Brymare, Jean Vollant, Roger Guener, and Guillaume de La Haye, from Rouen on 8 April 1507. The group of eleven pilgrims from Normandy were joined by others in Orléans, on the Loire, and reached Lyon in eight days. A week later, they had crossed the Alps and arrived in Turin (other members of the company had chosen to go via Genoa, where the French King Louis XII was staying at the time). At Pavia, they abandoned their horses and navigated along the Po, arriving in Venice on 5 May. Like many pilgrims of the period, Mésenge and his group used the Adriatic port city as a provisioning point. All told, they spent a full month there, staying at the Lion Blanc guest house and undertaking complex negotiations to secure passage eastwards.

While discussing the stay in Venice, Mésenge provides helpful hints for the prospective traveler (fol. 5r), including a fascinating list of necessary items: the proper amounts and units of currency; a chest for storing one’s belongings during the voyage and for sleeping upon; appropriate table linens for eating; a good number of clean shirts to avoid vermin; wine, water, and bread to supplement the poor quality offerings onboard; ham and sausages for meals; dried prunes, raisins, almonds, eggs, butter, and fish, which one can eat instead of the rancid meat rations that can cause illness; and a variety of preserves that can soothe an upset stomach or seasickness. This portion of the manuscript also includes a curious set of medicinal recipes shared with Mésenge by a Venetian doctor (fols. 5r–5v). Though the group reached Jaffa on 12 July, they were only permitted to disembark twelve days later. On 30 July, they finally entered the Old City of Jerusalem. On 18 August, they began to retrace their journey, leaving from Jaffa but only arriving back in Venice on 12 November. By 28 December they were back in Rouen, in time for the New Year.

Such pilgrimage accounts from the late Middle Ages and early Renaissance are, of course, a widespread genre, and in the main they are extensively studied. However, Mesenge’s engaging, French-language text is too-little known. It is not the subject of a published edition: the two other main witnesses (Amiens, Bibliothèque municipale, ms. Lescalopier 99 and Rouen, Bibliothèque municipale ms. 1119) were transcribed for two separate Masters’ theses, but neither is available digitally, nor in any copies beyond those preserved in their repository libraries.3 Only the prescriptions offered to Mésenge by the Venetian doctor, of interest to historians of medicine, have been transcribed and published (based on the Amiens exemplar of the text).4

Equally unfortunate, while the current manuscript is listed as a witness of the text in the authoritative Europäische Reiseberichte des späten Mittelalters5 and in the related web project, Digitized travel accounts of late medieval and early modern Europe, its current whereabouts at Bryn Mawr are not noted, despite having arrived there, to great fanfare, in 1942. Interestingly, the importance of the present manuscript was noted by none other than Seymour de Ricci (1881–1942), the bibliographer responsible for the Census of medieval and renaissance manuscripts in the United States and Canada. In 1939, he wrote a short article highlighting the text’s importance and connecting the present copy with an earlier provenance trail.6

In these sources, the last known location of the manuscript was listed as the London book trade in the 1930s. The gift of the volume to Bryn Mawr occurred around the time of de Ricci’s death, and the Faye and Bond Supplement to the Cenus makes no mention of de Ricci’s article from 1939. A project run by the Institut de Recherche et d’Histoire des Textes (IRHT), the Répertoire des textes et des manuscrits médiévaux d’oc et d’oïl (JONAS) does record the Bryn Mawr manuscript, but not the Rouen version! The only scholarly publication that appears to make specific mention of the Bryn Mawr manuscript’s contents, however briefly, is an article on daily life aboard Venetian ships during the Renaissance.7 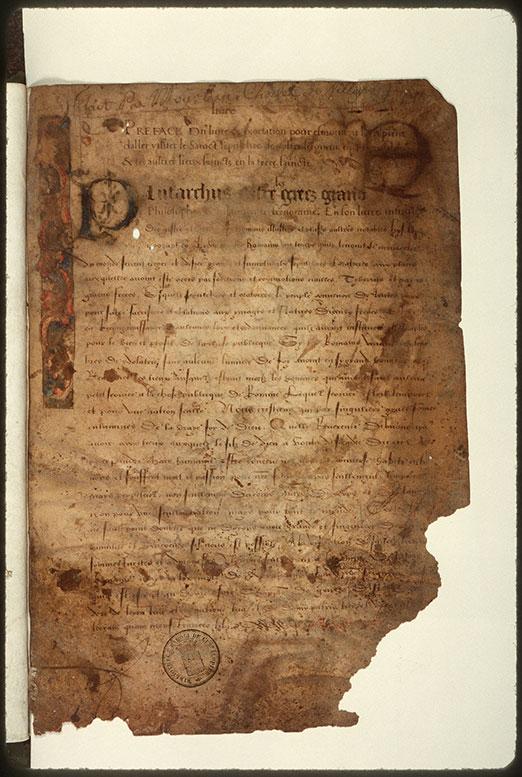 As can be seen from the image above, the Amiens copy of the text is significantly later in date (as betrayed by the mature “bâtarde” script), and in fact appears to bear the year 1534. Furthermore, it has suffered from significant damage. The Rouen exemplar, BM ms. 1119, looks likewise to be a later copy, from 1545. The Bryn Mawr example, in this case, may well be the earliest known exemplar of the text. The style of its still-Gothic textualis script, and especially of its illuminated initials and borders, has much in common with Rouen scriptoria of the turn of the sixteenth century and indicate a date that could not be much later than 1508, the return date from the pilgrimage journey, as specified in the text itself.

Compare, for example, a detail of the preface initial with that from another Bryn Mawr manuscript, the Chew Psalter, produced at the end of the fifteenth century. Or, an initial from an account of Anne of Brittany’s death, produced in Rouen in 1514 or soon after, now in Lyon. Clearly, with the Bryn Mawr manuscript, we are dealing with a very-close-to contemporary copy of the text. Perhaps a critical edition of the Bryn Mawr exemplar would draw us closer to this lively and engaging account of trans-Mediterranean adventure. We can end with de Ricci’s own words on the topic (which I have translated from their original French):

“Let us hope that the new owner of this curious volume has the good idea to publish this unknown text, comparing it with the two, likewise unpublished versions in Amiens and Rouen.”8