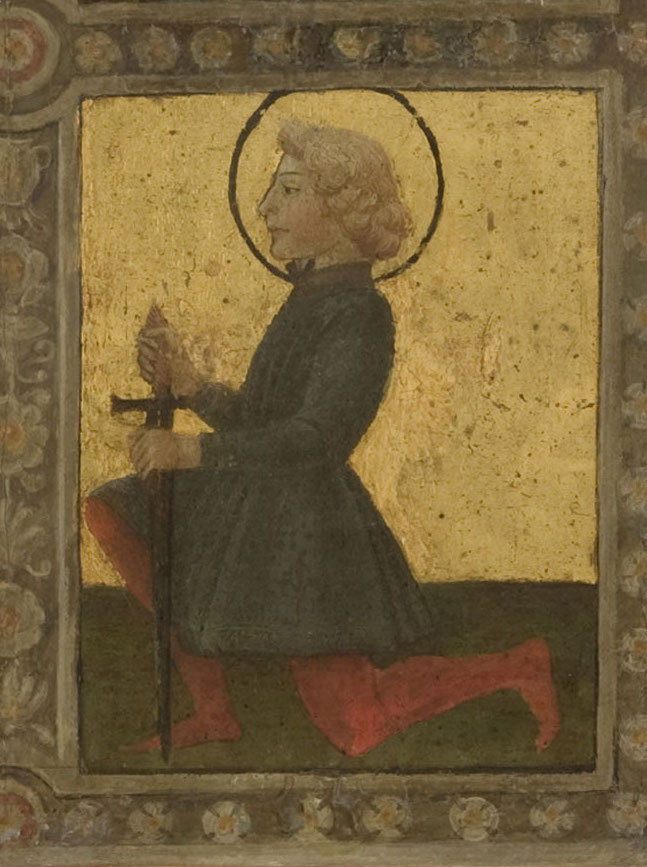 The Philadelphia Museum of Art choirbook is notably less lavish than other manuscripts owned by Bement, which is perhaps why he gifted it to the fledgling museum rather than selling it on through A.S.W. Rosenbach or another local book dealer. There are, however, some quite beautiful initials that are worth reproducing here. Each of these decorated letters makes use of the three primary colors.

While the style of the script and these penwork initials suggest Italian work of circa 1300 or a little later, the choirbook is liturgically fairly nondescript. Nevertheless, a short chant on the final folio, added early on in the book’s history on three extra blank staffs at the end of the volume (and a fourth added in drypoint), is dedicated to Saint Galganus. As with the rest of the volume, it accords roughly with a date of around 1300, and can be compared to examples such as a late-thirteenth-century Gradual from San Pantaleone, Pieve a Elici, near Lucca (Paris, Bibliothèque nationale de France, NAL 2605), listed in the Nota quadrata project.2 The text itself reads:

As far as I can tell, this is a unique prayer. It can be (roughly) translated into English as follows:

Pray for us, blessed Galganus, that we may be made worthy of Christ’s forgiveness. Holy Galganus, confessor of Christ, eternally entreat your servants to be devout to Christ.

The abbreviation “evovae” or “euouae,” used twice, is a notational device that occurs in Gregorian chant. It represents the musical setting of the vowels found in the words “saeculorum amen” at the end of the Gloria Patri doxology. 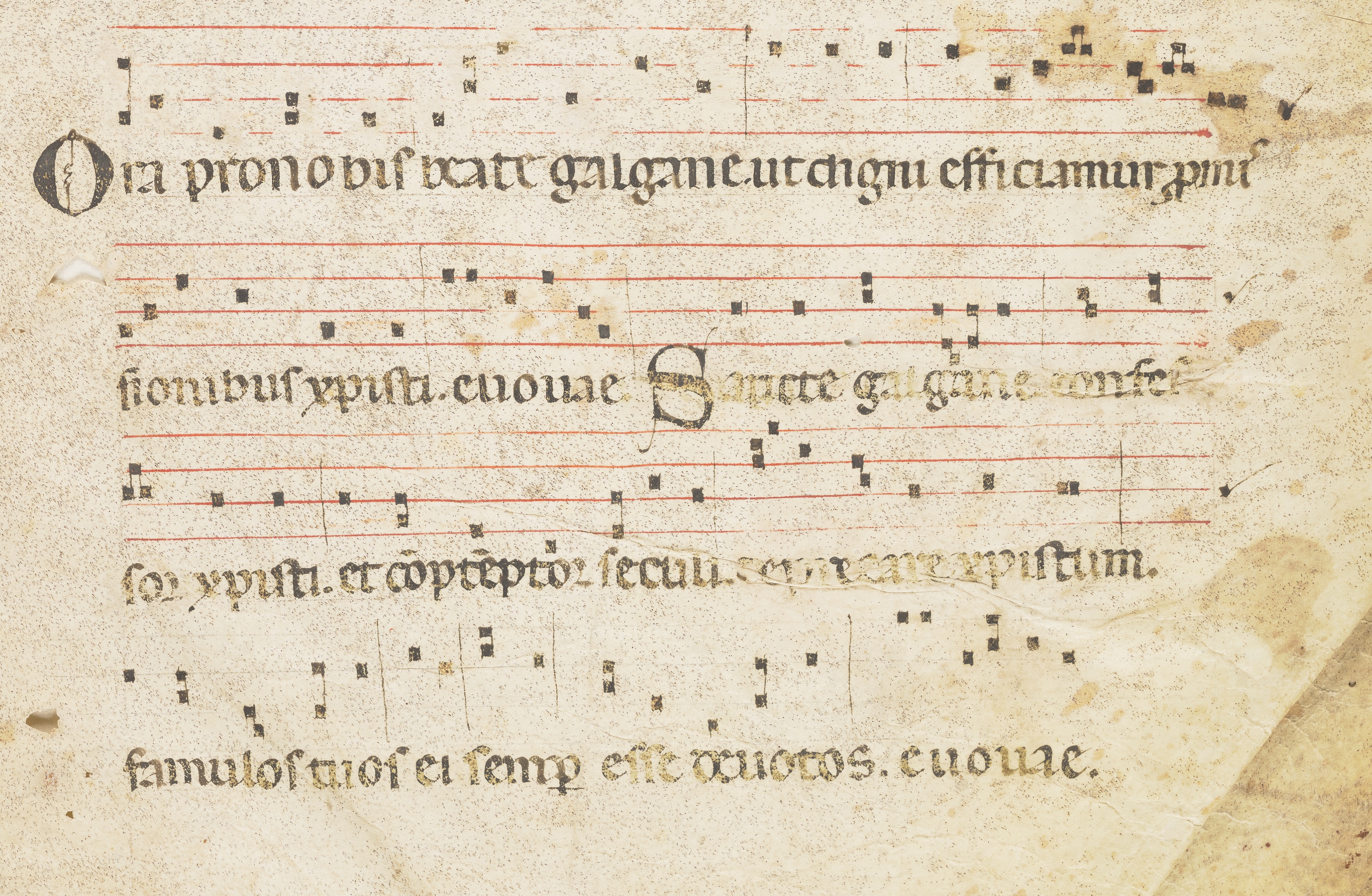 Galgano Guidotto (1148–1181), better known as Saint Galganus, was a young Tuscan knight who became venerated after his death on account of his spiritual visions. The most famous of these is associated with the tale of The Sword in the Stone. As his hagiography recounts, Galganus experienced a vision of Christ and the Twelve Apostles on the hill of Montesiepi. Following this event, he was compelled to erect a cross but had no suitable materials except for his sword. He thrusted his weapon into the ground, whereupon it became fused with the rock and impossible for anyone to remove. A round chapel was built around Galgano’s immovable sword, which still survives today. A large Cistercian monastery, today in ruins, was also erected nearby at the beginning of the thirteenth century. Galgano was widely venerated in the area around Siena in the thirteenth and fourteenth centuries, and many images record him holding his famous attribute.3 The specificity of Galgano’s cult helps narrow our localization of the PMA’s choirbook to the region around Siena.

Perhaps the book’s more recent owner, the mineralophile Bement, acquired the manuscript because he appreciated the potential link to that most lithic of myths, the Sword in the Stone. 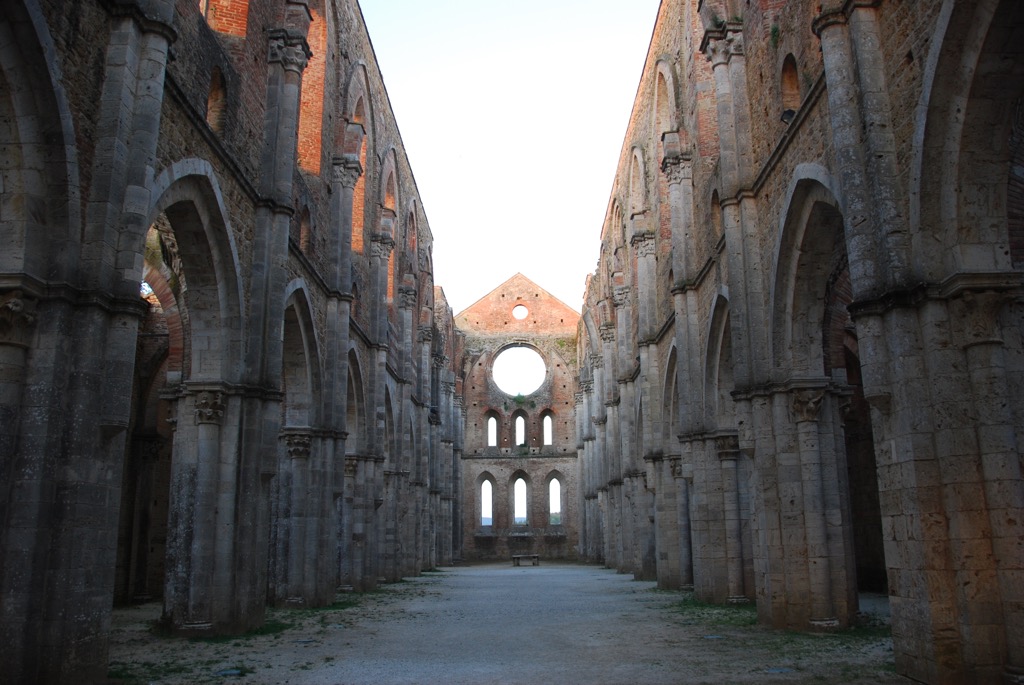 The nave of the ruined Cistercian abbey of San Galgano, Montesiepi, province of Siena