This unusual image is found in the Free Library of Philadelphia’s Lewis E 126, a Book of Hours from Rouen that can be dated to the reign of the French king Louis XII (r. 1498–1514) on account of an inscription in the frame on folio 35v. Though it may be slightly later than the rest of the book, the dimidiated coat-or-arms on folio 37v was identified by Albert Van de Put as those of the Quinard family of Languedoc and Venot de Noisy of Burgundy and the Lyonnais,1 with Jean-Luc Deuffic more recently suggesting the more likely Normandy family of Vauquelin instead of Quinard. The miniatures in the book were produced by two distinct artists, but ours is identifiable with Robert Boyvin (another book in the Free Library, Lewis E 124, was illuminated by a close collaborator of his).2 Facing an image of the Annunciation, the miniature on folio 14v of our manuscript shows several figures in white-grey grisaille. The figures in the lower area, standing upon the ground, represent l’Église (the Church, in place of the habitual Truth) paired with Justice, and Miséricorde (Mercy) paired with Sapience (Wisdom). The four personifications are labelled below in gold lettering. In the middle is the Angel Gabriel. Above, the scene is surveyed by an isomorphic Trinity holding open the Book of Life, and surrounded by three Orders of Angels: seraphim, cherubim, and thrones.

Though other versions of the image existed earlier in the Middle Ages,3 this variant of the Procès de Paradis was inspired by the Mystère de la Passion, a mystery play by Arnoul Gréban that was performed widely in France during the fifteenth century.4 As an iconography, it has been well-studied.5 It occurs, for example, in late-fifteenth-century Parisian Books of Hours produced in the workshop of the Maître François, an illuminator tentatively identified with a certain François le Barbier the elder.6 In one example now in New York (The Morgan Library & Museum, MS M.73), dated to about 1475, the first four lines of text for the Hours of the Virgin divide the page in two, with the Annunciation (habitually the standalone image for this section of the Book of Hours) occurring below. In other cases, such as in this somewhat eccentric Parisian Book of Hours with miniatures by several different artists (The Morgan Library & Museum, MS M.179) the image has even replaced the Annunciation at the beginning of the Hours of the Virgin (fol. 38r), relegating it to Lauds! By the time our book was made, the layouts of Books of Hours were being modified from the start to allow for one or two full-page miniatures preceding the beginning of the text, which meant that the Annunciation could be accompanied by another scene such as the Procès de Paradis. Our collation model shows that this was the case for our book: the scribe has given the illuminator carte blanche, as it were, for the striking double miniature. 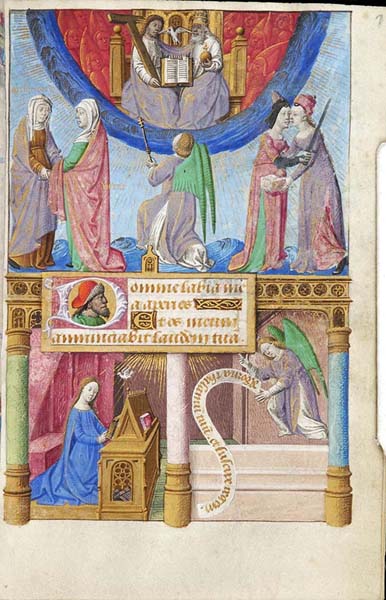 Book of Hours, Use of Paris, New York, The Morgan Library & Museum, MS M.73, fol. 7r (miniature for the beginning of the Hours of the Virgin showing the Procès de Paradis or Parliament of Heaven and the Annunciation)

The Procès de Paradis composition seems to have been introduced to Rouen (where our manuscript was made) by Jean Pichore, the prolific illuminator who also provided numerous designs for metalcut prints for Books of Hours.7 Pichore worked with the border decorator Jean Serpin, who also collaborated with Boyvin, our illuminator. A Book of Hours Pichore illuminated around 1500, now in the Vatican Library (Barb. Lat. 487), shows the Procès de Paradis facing the Annunciation, as in our book. An example of Pichore’s broadly disseminated metalcut, from a hand-colored, printed Book of Hours at the University of Kansas, shows very close similarities to the earlier manuscript version. Other manuscript illuminators active in Rouen, such as the Master of Philippe of Guelders, used somewhat different compositions (San Marino, Huntington Library, HM1101, fol. 19v). 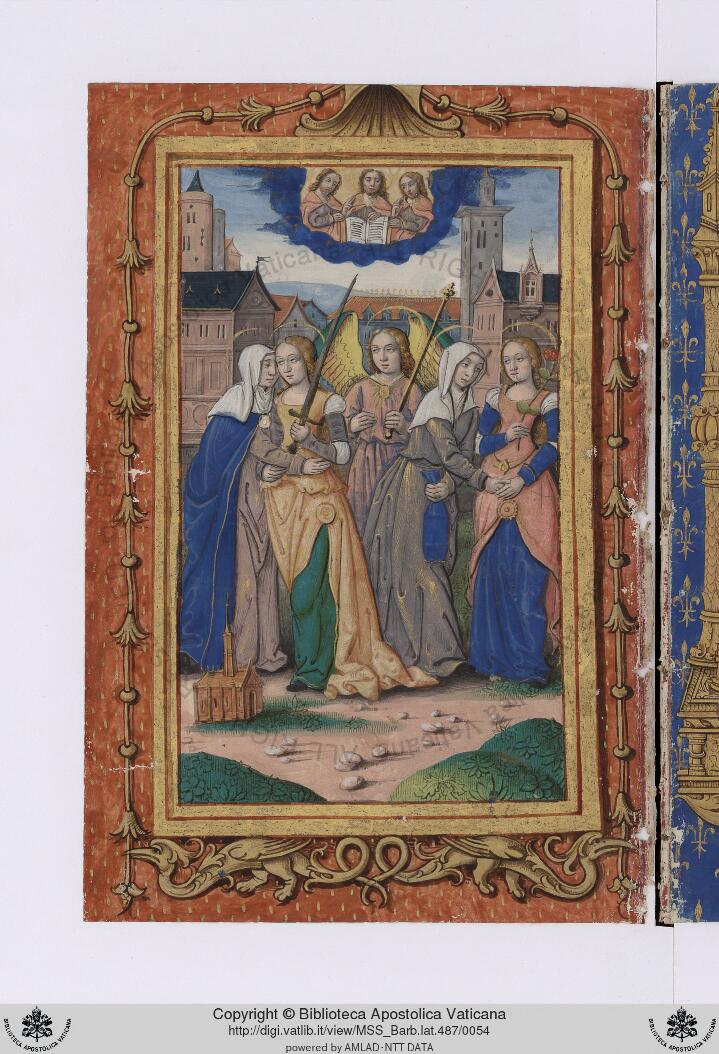 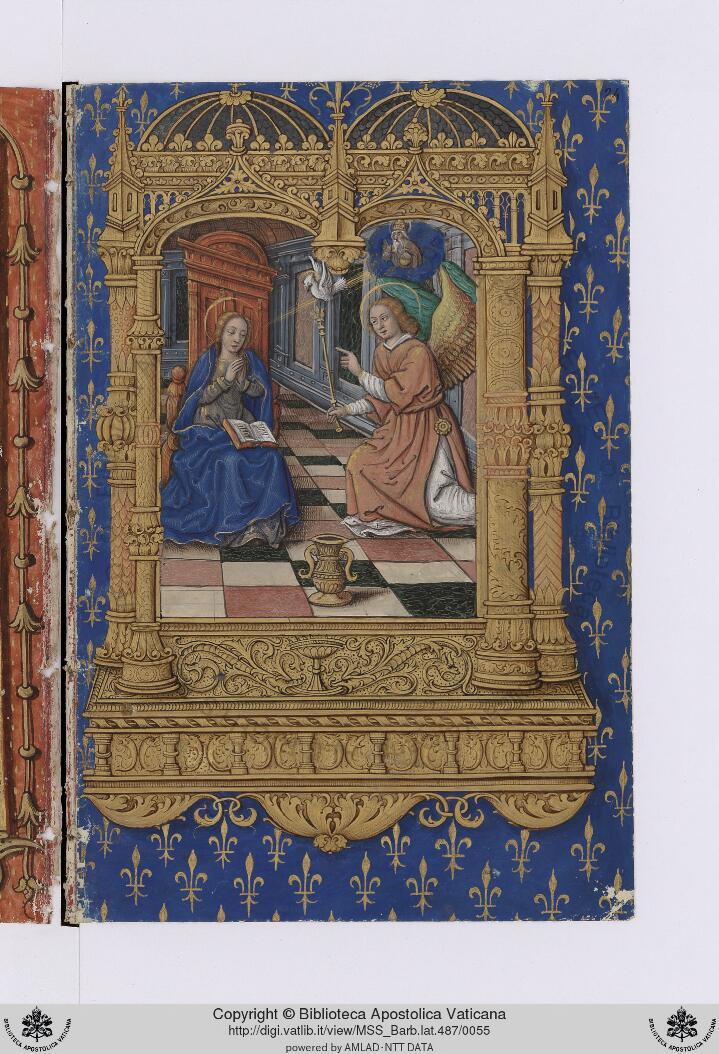 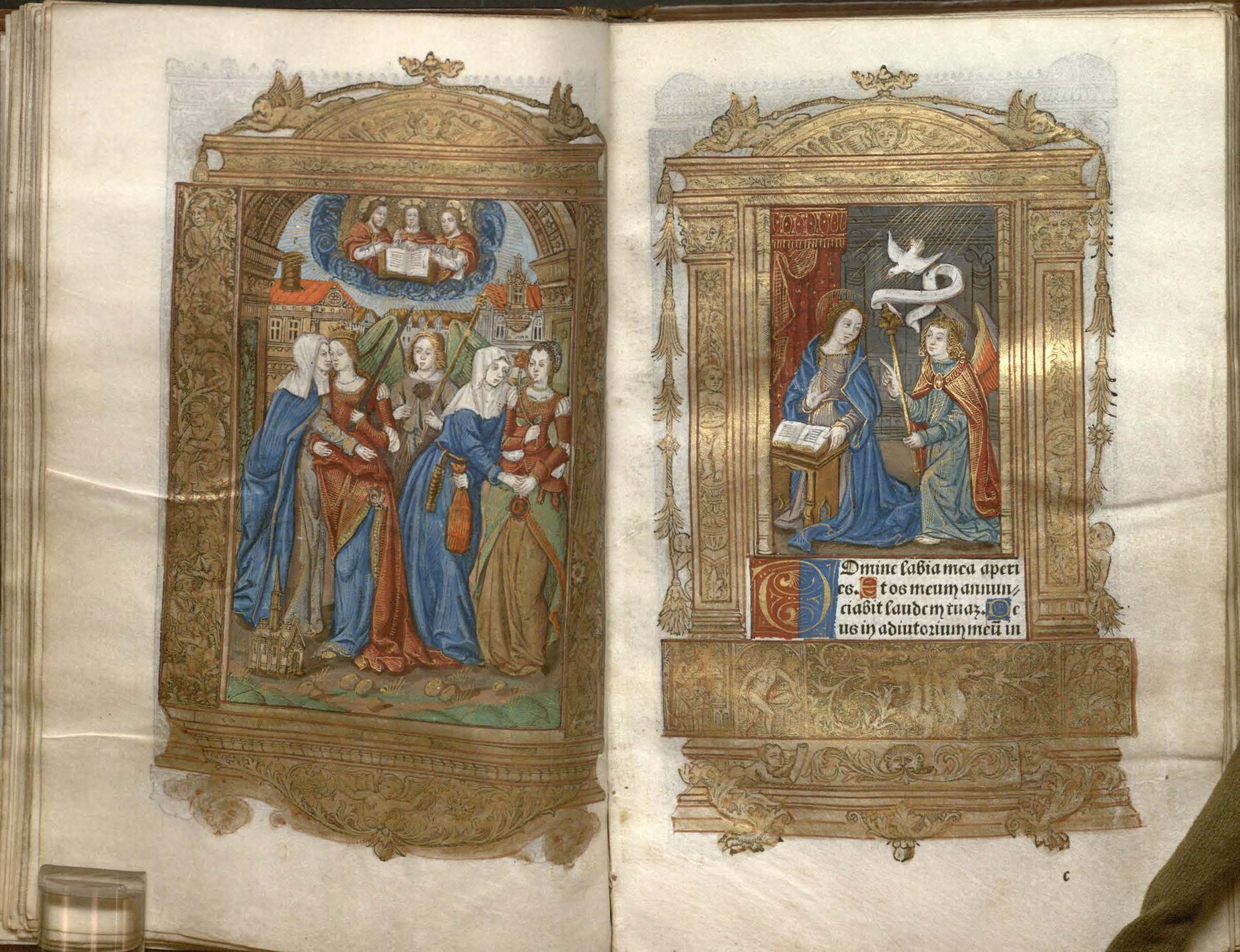 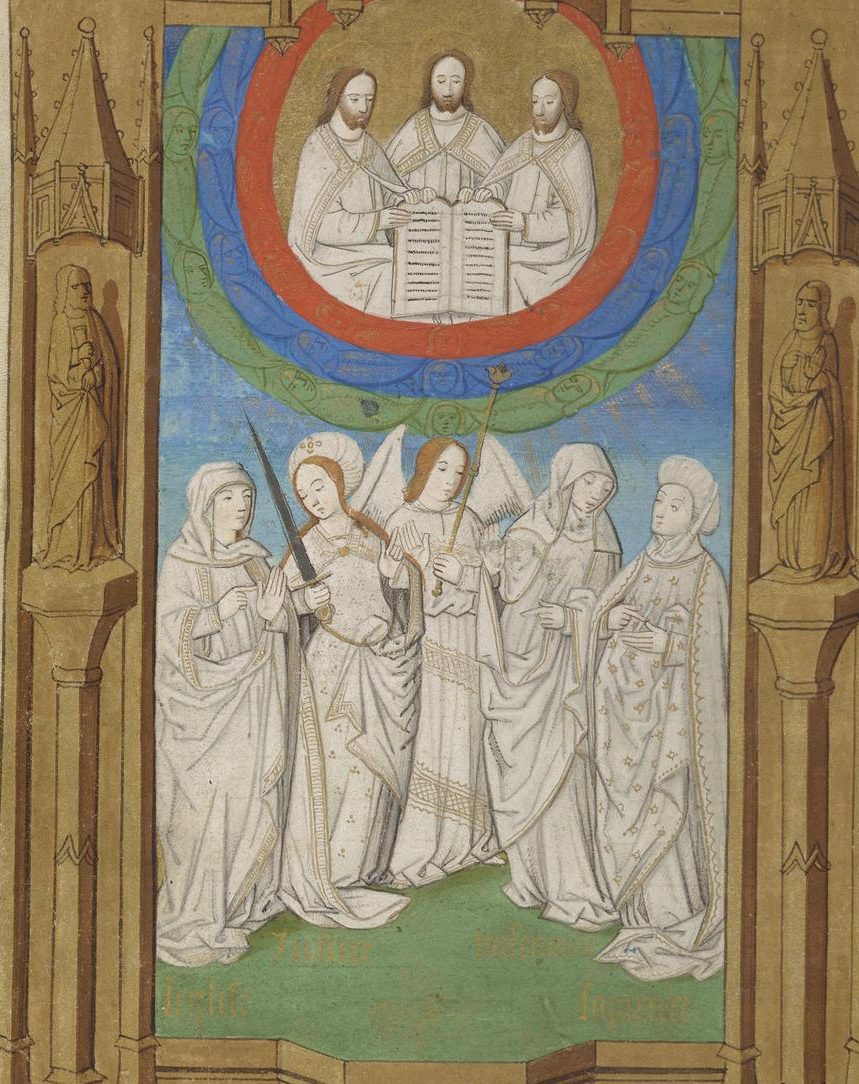 Was our illuminator perhaps inspired by Pichore’s images, either in manuscript or print? As you can see, our miniature differs in important ways from both Pichoresque images: the female pairs of Church and Justice and Mercy and Wisdom do not embrace, but seem instead to debate the finer points of theology (counting fingers was a widespread gesture denoting scholarly dispute at the time).8 Another miniature by our Boyvin, also showing the Procès du Paradis and dated to 1502, shows a much greater similarity to Pichore’s image. Indeed, it is directly derived from it (Paris, Artcurial, 1 December 2014, lot 105, fol. 25v). Moreover, the colorless grisaille of our manuscript’s figures seems unusual.9 Was Boyvin simply reacting to an uncolored, printed image he saw, or was this a more deliberate choice? 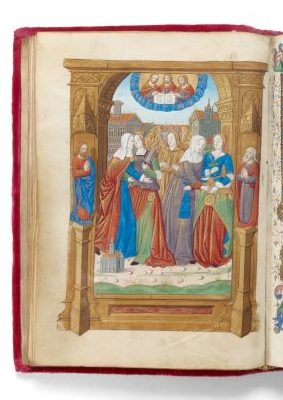 Overall, do the subtle differences found in our manuscript inflect the meaning of the composition? Might Boyvin have been referring to particular aspects of allegorical mystery plays being performed at the time in Rouen, or is he merely transmitting another pre-existing image? More research into the artist’s immediate context might yield additional answers.