The manuscript we are looking at today—another University of Pennsylvania manuscript—is a collection of papal decrees and bulls pertaining to the Augustinians, a mendicant order that expanded  alongside the Franciscans and Dominicans from the thirteenth century onward. The compilation begins with a series of older texts combined into a sprawling bull outlining privileges for friars of the order, the Dum fructus uberes. This work was composed at the instigation of Pope Sixtus IV in 1475, giving a fairly straightforward terminus post quem for the date of our manuscript. However, the compendium appears to be an updated version, as it includes decrees by the more recent popes, Alexander VI and Julius II, which suggest a date of around 1505–6. Interestingly, the text of the Dum fructus uberes preserved on folios 1r–31v is identical to that in another manuscript at the University of Pennsylvania, Ms. Codex 736 (fols. 1r–28v). The latter, dated to 1475 and undecorated, was destined for the Augustinian Friars of Rouen. University of Pennsylvania, Ms. Codex 736, fol. 2v, showing the beginning of the “Sixtus…” Bull identical to that in Ms. Codex 85

The manuscript’s text is copied in two parts (fols. 1r–69v, 71r–125v) and was apparently commissioned by the Augustinian theologian and abbot Antonio Meli, for the use of a certain Joannis Angeli, likewise a friar at Crema, Lombardy (inscription on fol. 1r). We can learn some of the details of Meli’s life from the Dizionario biografico cremasco:2 he was the recipient of a doctorate from the Sorbonne, and enjoyed an illustrious career within his order, rising to the position of Vicar General in 1516. He authored a popular mystical tract, the Scala del Paradisio, as well as other devotional treatises, and became confessor to Lucrezia Borgia (1480–1519). He died in Crema in 1528. 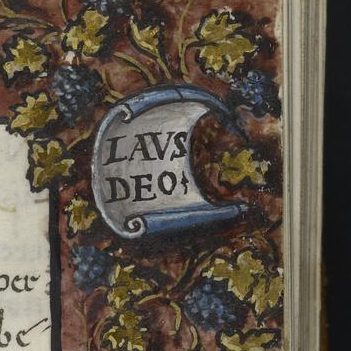 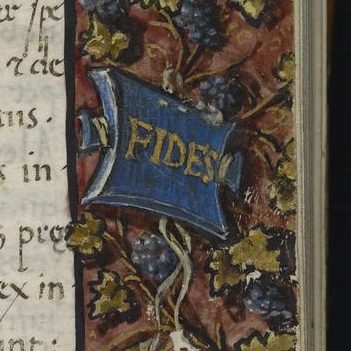 The book is unusually richly illuminated for this type of compendium. Folio 1r includes a dense frame of gold foliage and blue grapes set upon a pinkish-red background, in an up-to-date style for the early sixteenth century. In the right margin is a scroll that reads “Laus Deo” and a blue placard inscribed with “Fides” in gold lettering. Above is a sleek bluish-green bird, while below, in a perspectival green medallion with a blue parapet, is a bust-length portrait of a reading bishop, undoubtedly Saint Augustine. 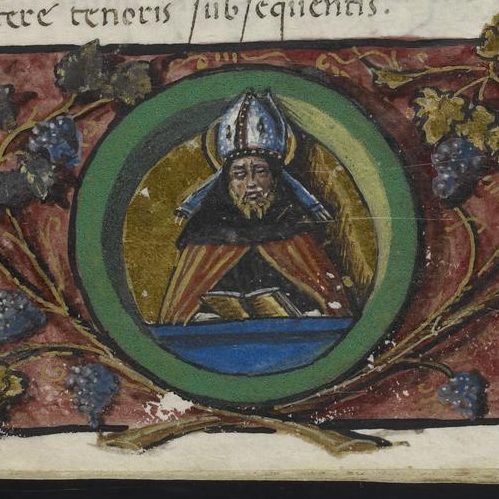 Within the book, each new section of text begins with either a spray of multicolored vine (up to fol. 59v) or a faceted initial (from fol. 63v). The book’s second section is also introduced by a decorated border (fol. 71r), with garlands composed of berries, fruit, books, and a skull hanging illusionistically from the parchment. While the decoration is relatively crude, it nonetheless participates in the wider all’antica visual culture of the time. On the basis of strong stylistic and circumstantial evidence, the manuscript’s borders can be attributed to the workshop of Giovanni Pietro da Cemmo (doc. 1474–1507). This artist, active in the region around Crema, was more broadly known as a fresco painter, with his work as an illuminator being rediscovered only relatively recently.3 He enjoyed very close links to the city’s Augustinian convent (today the Museo Civico) in the early years of the sixteenth century, painting a refectory fresco cycle there in 1507. He also illuminated a set of seven choir books for the foundation, the writing of which had been completed by the scribe Apollonio di Calvisano in 1498 (Crema, Museo Civico, codici XVI–XXII). The refectory cycle displays bust-length figures within illusionistically angled medallions, including in a portrait of Saint Augustine, and similar motifs are found elsewhere in his monumental work.4 The third volume of the choir book set (XVIII) begins with a grand frontispiece, which, while in a more elaborate style, contains a medallion portrait of Augustine in its lower margin (fol. 1r). Giovanni Pietro’s last documented work was the illumination of an Ordo manualis, likewise for the Augustinian convent (Bergamo, Biblioteca Civica Angelo Mai, MS Cassaf. 2.3). Both this and the Sant’Agostino choir books contain distinctive hanging garland border motifs, closely reminiscent of those on folio 71r of the Bullarium. 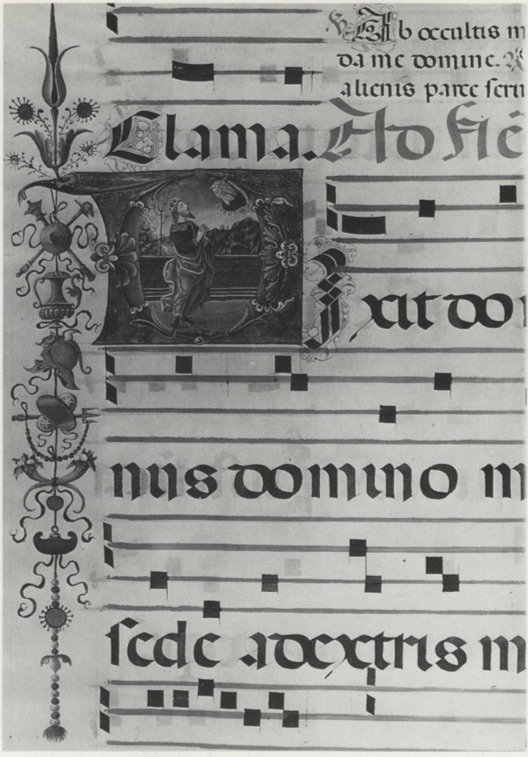 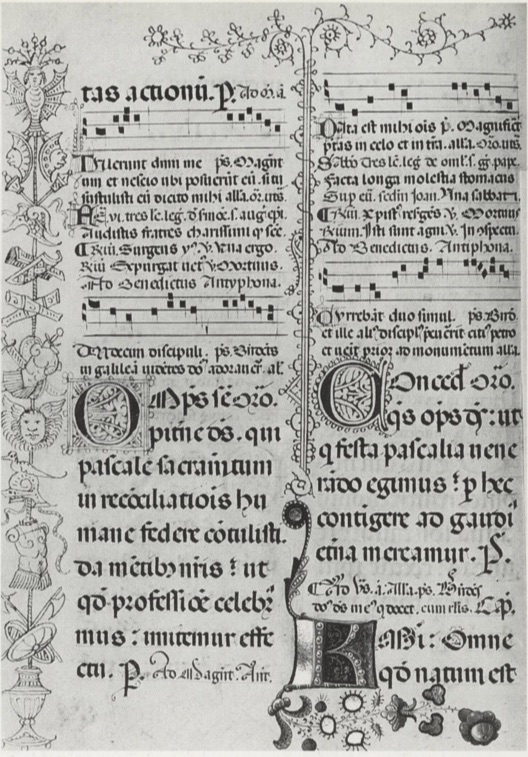