The brightly illuminated, historiated initial T that is the subject of today’s post begins the preface of the Canon of the Mass in Latin, “Te igitur, clementissme Pater…” (“To you, therefore, most merciful Father…”), and would originally have faced a large image of the Crucifixion in a Missal, the liturgical volume that contained the complete texts to be used for the Mass throughout the year. The text continues on the reverse side, which would have been the verso of the page. The instructions for the officiant are in red, while the black text contains the portion of the rite that is read audibly (“That you accept and bless…”): The subject of the miniature is the Lamentation, with Mary holding Christ’s dead body at the center, flanked by Saints John and Mary Magdalene on her right, and Peter and another Apostle on her left. Particularly interesting is the manner in which the shaft of the letter T, which would otherwise occupy the middle of the pictorial field, has been creatively truncated to allow the full Lamentation scene to be depicted. This visual device confirms that the entire letter was conceived and painted as a whole, rather than being the combined work of a specialist decorator responsible for an initial, and a miniaturist responsible for the figurative scene.

The miniature’s style is somewhat dry but bright and fluidly painted, an encapsulation of the Florentine High Renaissance aesthetic; it can be attributed to Vante di Gabriello di Vante Attavante, called Attavante (1452–ca. 1520/25). Praised by Giorgio Vasari in his life of Fra Angelico as a “celebre e famoso miniatore,” Attavante was an accomplished emulator of his eminent contemporary, the Florentine painter Domenico Ghirlandaio (1449–94). He garnered significant renown in his own lifetime and was among the experts called upon by the Florentine republic to decide on the appropriate location of Michelangelo’s David. His output was very large, and he undoubtedly had several workshop assistants; in 1914, Paolo d’Ancona listed over a thousand illuminated manuscripts related to his artistic style.2

While Annarosa Garzelli, the great scholar of Florentine manuscript illumination, considered this cutting to be an early work by one of Attavante’s obscure associates, a certain Littifredi Corbizzi (1465–after 1515), it appears to be considerably later in date.3 In fact, it may be a hitherto unrecognized fragment of a set of three Missals decorated by Attavante himself around 1520 for the Sistine Chapel by Giovanni di Lorenzo de’ Medici, better known as Pope Leo X (r.1513–21). These Missals, along with numerous other liturgical volumes from the Vatican ranging in date from Pope Innocent VIII (r. 1484–92) to Innocent XI (r. 1676–89), were requisitioned by Napoleonic troops in 1798, dismembered, and sold off. Many fragments passed through the hands of Abbot Luigi Celotti, well known for conducting the first modern sale of illuminated cuttings and fragments, in London on 26 May 1825.4 Later, the English collector and amateur William Young Ottley (1771–1836), who had compiled the Celotti sale catalogue, held his own auction in 1838 that included many more cuttings from the Sistine Chapel choir books. The present item cannot be located definitively in either sale catalogue, but on the basis of style and of the script on the reverse it can be compared closely to fragments that were in the sales. Lewis purchased the manuscript cutting in 1913 from the German bookseller Martin Breslauer for 480 Marks, as his own notes in pencil on the reverse of the cutting attest. 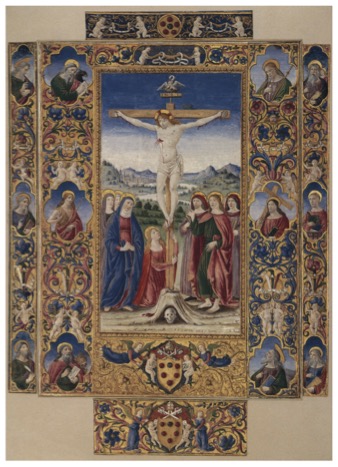 Intriguingly, the figure style in our initial is extremely close in style to that of a large Crucifixion miniature surrounded by five other cuttings with emblems of Leo X, now in a private collection.5 Christ, the Virgin Mary, and Mary Magdalene all display identical physiognomies. Our cutting can also be compared directly to another, smaller “Te igitur” initial, showing Christ as the Man of Sorrows, recently on the art market (113 × 101 mm vs 140 x 127 mm for our item).6 In that initial, the letter T, identical to ours in coloration and design, has also been segmented to accommodate the composition. 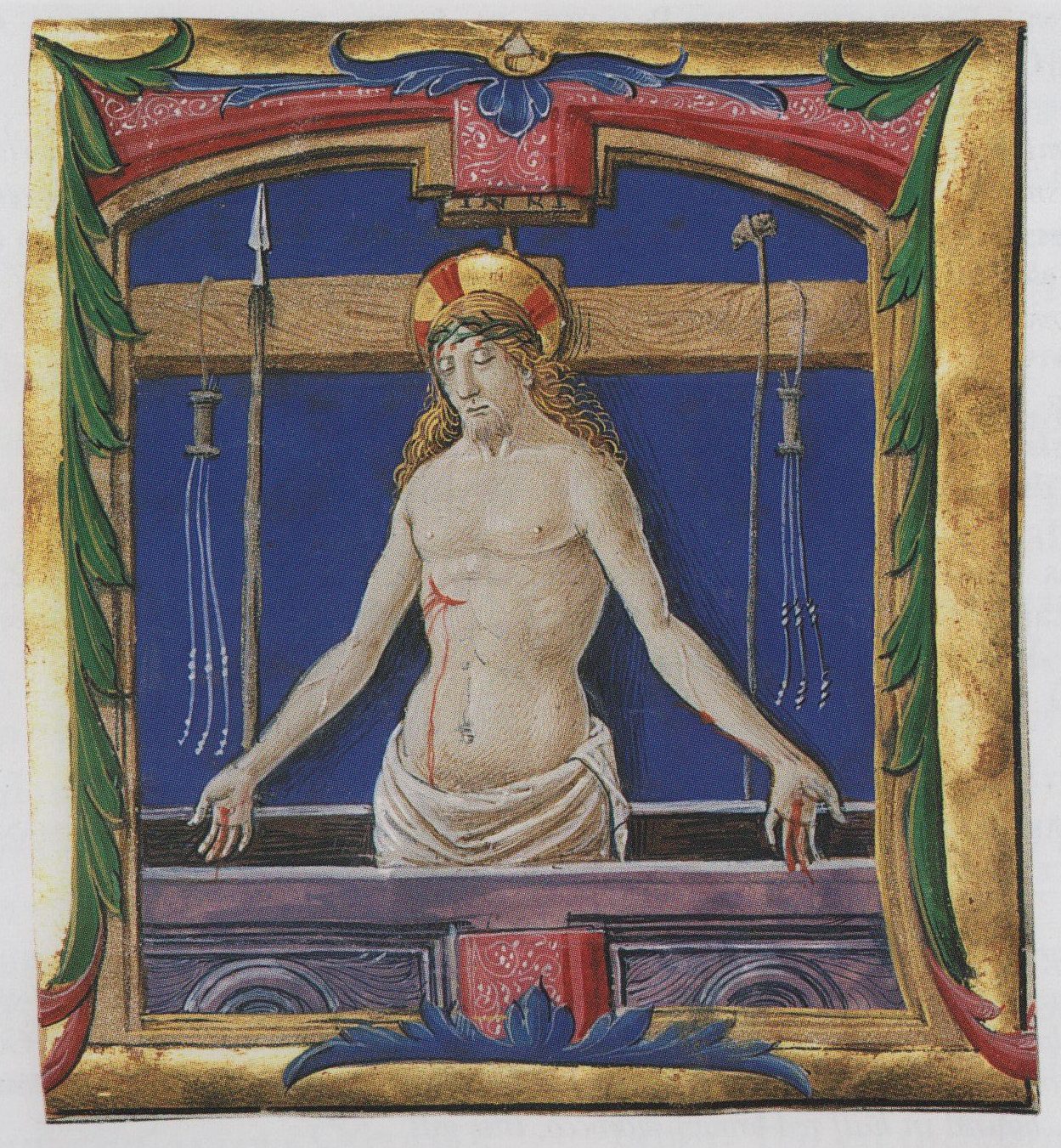 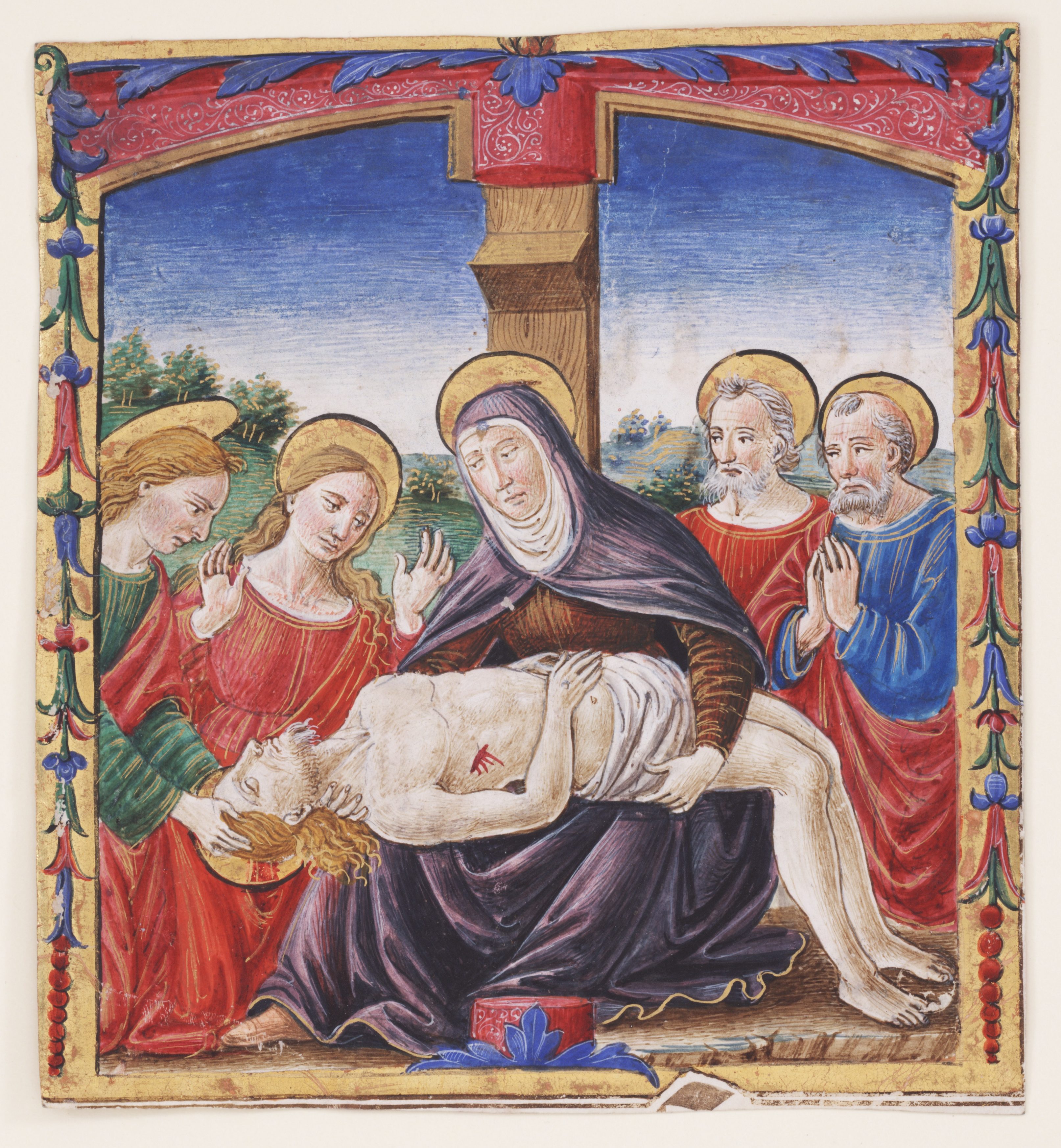 While they remained in their original location, the Leonine Missals were documented through sacristy inventories compiled in 1547, 1714, and 1728.7 These archival documents are now located in the Camerale I series at the Archivio di Stato, Rome.8 The first inventory does not provide information sufficient to localize our fragment among the three Missals of Leo X, but the second and third inventories mention that item A.I.4, a “Messa papale per la Natività” for that pontiff, included a Crucifixion on folio 47 and an image of the “Deposizione dalla Croce” on folio 48 (i.e., for the facing, “Te igitur” page). Though the scene in the present cutting is best described as a Lamentation or Pietà, the iconographies were routinely conflated in early modern nomenclature. No specific “Te igitur” image is listed for the Missals A.I.2 or A.I.3, so it is reasonable to assume that the Free Library cutting formed part of A.I.4, facing either the large Crucifixion miniature mentioned above, whose cropping has removed any confirmatory foliation, or another, missing composition of similar appearance.

Many other remnants of these papal Missals, including both strips of border decoration and inhabited initials, have been identified to date. Recently, Peter Kidd discovered a number of hitherto unknown fragments housed at Vassar College, and related these to others in Paris and on the antiquarian market.9 Other sets of fragments consisting of strips from the volumes’ lavishly illuminated borders survive in numerous locations, including Houghton Library and the British Library. An intact nineteen-folio volume containing the preparatory psalms and prayers to be recited before the Mass (New York,The Morgan Library & Museum, H.6) is also illuminated by Attavante and is clearly identifiable with item A.I.1 in the eighteenth-century inventories. That book bears the arms of Leo X and includes the date of 1520, providing an approximate chronology for the accompanying Missals. A different item in the Free Library of Philadelphia, consisting of a border frame and historiated initial, was extracted from a Missal created for Leo X’s cousin, Cardinal Giulio de’ Medici, before he became Pope Clement VII in 1523 (Lewis E M 46:13);10 its parent volume is also identifiable in the eighteenth-century Sistine Chapel inventories as item A.II.18.