Still, the story of one neglected item, preserved in the collections of the Free Library of Philadelphia, perfectly illustrates the disciplinary pitfalls described above. Lewis E 179 is a modest book of 109 paper folios written in a non-professional, Northern European humanist hand, adorned with forty-five engravings illustrating the Life of Christ from the Annunciation through to the Last Judgment. Based on the texts and images, the book could be dated as early as the 1530s. However, the distinctive watermark visible on some of the book’s pages (with the help of transmitted light) was employed only in the 1550s and 1560s, in the Netherlands and Northeastern France.2 It provides a relatively late terminus post quem and a rough localization for the book’s place of origin. 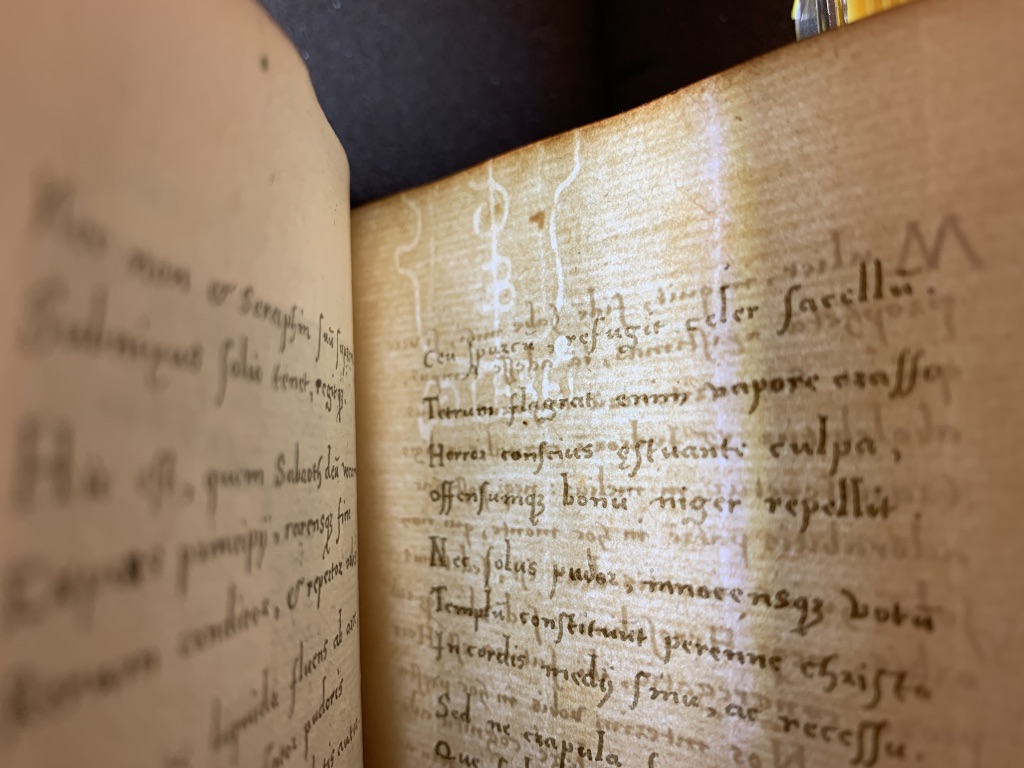 Lewis E 179, fol. 35r (detail of watermark visible with the aid of a light sheet); drawing of Briquet 9373 watermark from Briquet Online database

Evidence of subsequent provenance places the book in some important German collections of the early modern period. An early bookplate on verso of first flyleaf dated to 1661 indicates that the book was formerly in the possession of Joachim Enzmiler, Count of Windhag,3 while a second bookplate, from the eighteenth century, records the ownership of Eberhard von Kniestedt. Before joining the Lewis Collection, the book had been in the possession of the great German-Spanish-English bibliophile Henry Huth (1815–1878), who famously preferred intact and pristine copies to damaged books, qualifying the latter rather uncharitably as “the lepers of a library.” Huth spent a considerable amount of time in Hamburg, which may have provided him with access to this item. In both the posthumous 1880 catalogue of Huth’s collection, written by his son Alfred Henry Huth, as well as the 1911 catalogue of Alfred Henry’s collection, the book was described principally by means of its engravings.4 Since its acquisition by Lewis, the book had been summarily described in only two places: the catalogue of Lewis’ western manuscripts published by Wolf in 1937, and the de Ricci census.5 John Frederick Lewis, the Philadelphia bibliophile who had a penchant for oddities that could help illustrate the history of writing, evidently was not taken in by the widespread disinterest in this sort of book, even if those who catalogued his collection after his death did. Lewis liked “multimedia,” creations—he grangerized (adorned with extraneous material) dozens of his own modern reference books with pasted-down snippets and even full pages drawn from illuminated manuscripts. Lewis probably appreciated the book for its unusual amalgamation of print and script, not to mention its interesting original leather binding, with, on each side, a stamped center panel showing Christ triumphing over Death, with the initials HGV—perhaps those of the binder—, all set within blind-tooled, all’antica borders of scrollwork and portrait medallions. Looking more closely at the composition of Lewis E 179’s texts as part of the BiblioPhilly cataloguing process, I discovered that these consist of prayers and other devotional works by two important intellectual figures of the first half of the sixteenth century: Desiderius Erasmus and Marco Girolamo Vida. Interspersed as well are excerpts from the late-antique Christian apologist, Prudentius. These passages were copied by hand from editions that had been produced recently.

The prayers authored by Erasmus that have been copied into this book stem from three major sources. Eleven votive prayers are drawn from his Precationes aliquot novae, first published in 1535. These are interspersed throughout the work, diverging from their order in the 1535 edition. They consist of votive prayers for Receiving Communion, for Docility, for Penance, Against Temptation, for Thanksgiving in Victory, for Serious Illness, as well as prayers to the Virgin, to each of the three persons of the Trinity, and to Jesus as the son of the Virgin. Seven sections found in the second half of the book stem from Erasmus’ Precatio Dominica, a short work of seven prayers for the days of the week based on the seven parts of the Lord’s Prayer, first published by Froben in 1523. 6This work became immensely popular throughout Northern Europe and beyond, and within five years had been translated into German, English, Czech, and Spanish. Six sections, concentrated in the first half of the book, are excerpts from Erasmus’ paraphrases of Luke, Matthew, and John, each of which was published separately in the early 1520s.

Intercalated within the first half of the book are sections from the Christiad and four extracts from Prudentius’s Liber Cathemerion. The former is an epic poem first published in 1535 but written at the request of Leo X, which provides a Christian counterpart to Virgil’s Aeneid.7Its author, Girolamo Vida (ca. 1485–1566) was an Italian humanist, bishop, and celebrated poet during the early Counter-Reformation period.8 Works by the early Christian poet Prudentius, here represented by hymns for Epiphany, the feast of the Holy Innocents, for before meals, and for after meals, were appreciated by Erasmian humanists for their conflation of classical Latin forms with Christian motifs.9

There are other surviving manuscript compendia that contain assortments of Erasmus’ prayers, such as an unillustrated manual today in Brussels (Bibliothèque royale de Belgique, MS 5010).10 However, on the whole, such items remain understudied, not to mention un-digitized. Hopefully, the substantial community of Erasmus specialists will now be able to discover the intriguing Philadelphia volume and provide yet more information regarding its original context.

By pairing a unique selection of manuscript texts with an unusually extensive cycle of printed images, Lewis E 179 provides first-hand evidence for how these popular devotional texts were adapted and recombined by readers as the popularity of the traditional Book of Hours waned. The Prayer Book demonstrates how a new type of devotional manual could provide an idiosyncratic alternative to traditional forms in a period of religious foment. But what of the forty-five engravings that punctuate its pages, which remain unidentified? More will be said about those next week, when we will be joined by guest contributor Dr. Brooks Rich, Associate Curator of Old Master Prints at the National Gallery of Art and recent University of Pennsylvania graduate.