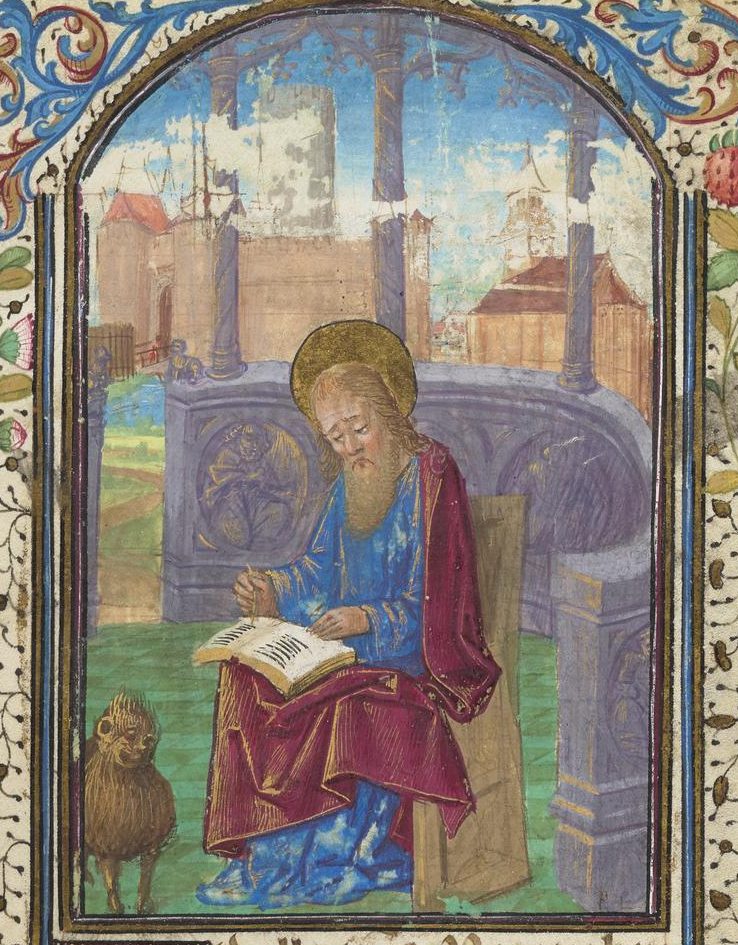 A much more modest example of a well-traveled manuscript is Philadelphia Museum of Art 1967–30–120, a Book of Hours for the Use of Rome with miniatures in a style that would suggest a place of production (or at least decoration) in the Berry region around Bourges. Though damaged, the miniatures have the deep, purplish palette and penchant for  landscape and architectural details reminiscent of the followers of the Bourges-based illuminator Jean Colombe (ca. 1430–ca. 1493). This manuscript is almost totally un-researched, but some details point to interesting later peregrinations. For example, after the Short Hours of the Holy Spirit and before the Penitential Psalms, a unique prayer in Italian simply titled “oratio devotissima” has been inserted in a rounded, humanistic script that must date from between about 1500 and 1525. Of course, this modification by an Italian speaker does not necessarily confirm that the book was in Italy, but an additional detail, the added Mass of the Virgin in meridional Rotunda Script on folios 172r–178r, corroborates the notion that the book was present in Italy at an early date. The book’s binding, which is damaged but quite finely tooled with a central crucifixion stamp, strapwork, and acanthus leaves, is typical of Italian bindings of the seventeenth century. However, the book appears to have returned eventually to France. The spine has been overstamped with bees, a distinctive detail typical of the library of Louis-Paul Abeille (1719–1807), lawyer to the Parliament of Brittany. At least, a later owner of the book identified the bees as such and noted this down in pencil on a flyleaf and cited the presence of the motif in Joannis Guigard’s Nouvel armorial du bibliophile: guide de l’amateur des livres armoriés, published in 1890. Above this pencil note is an older ownership inscription of a certain Samuel Tolfrey, dated 1869, likely identifiable with an English Army captain of the same name.

On the next flyleaf is a list of the manuscript’s miniatures, typical of a collector’s attitude to the contents of a Book of Hours. Interestingly, it is written in German. Based on the style of the cursive writing, it would appear to be as recent as the twentieth century. Currently, it is impossible to establish when and how the manuscript arrived in the collection of Samuel Stockton White III and Vera White, who bequeathed it to the Philadelphia Museum of Art in 1967 along with two other Books of Hours (PMA 1967–30–121 and PMA 1967–30–122), several dozen illuminated leaves, and other objects.1 However, these scattered provenance elements show that the book had a convoluted journey to its most recent resting place, rivaling the wanderings of other, more famous fellow travelers.