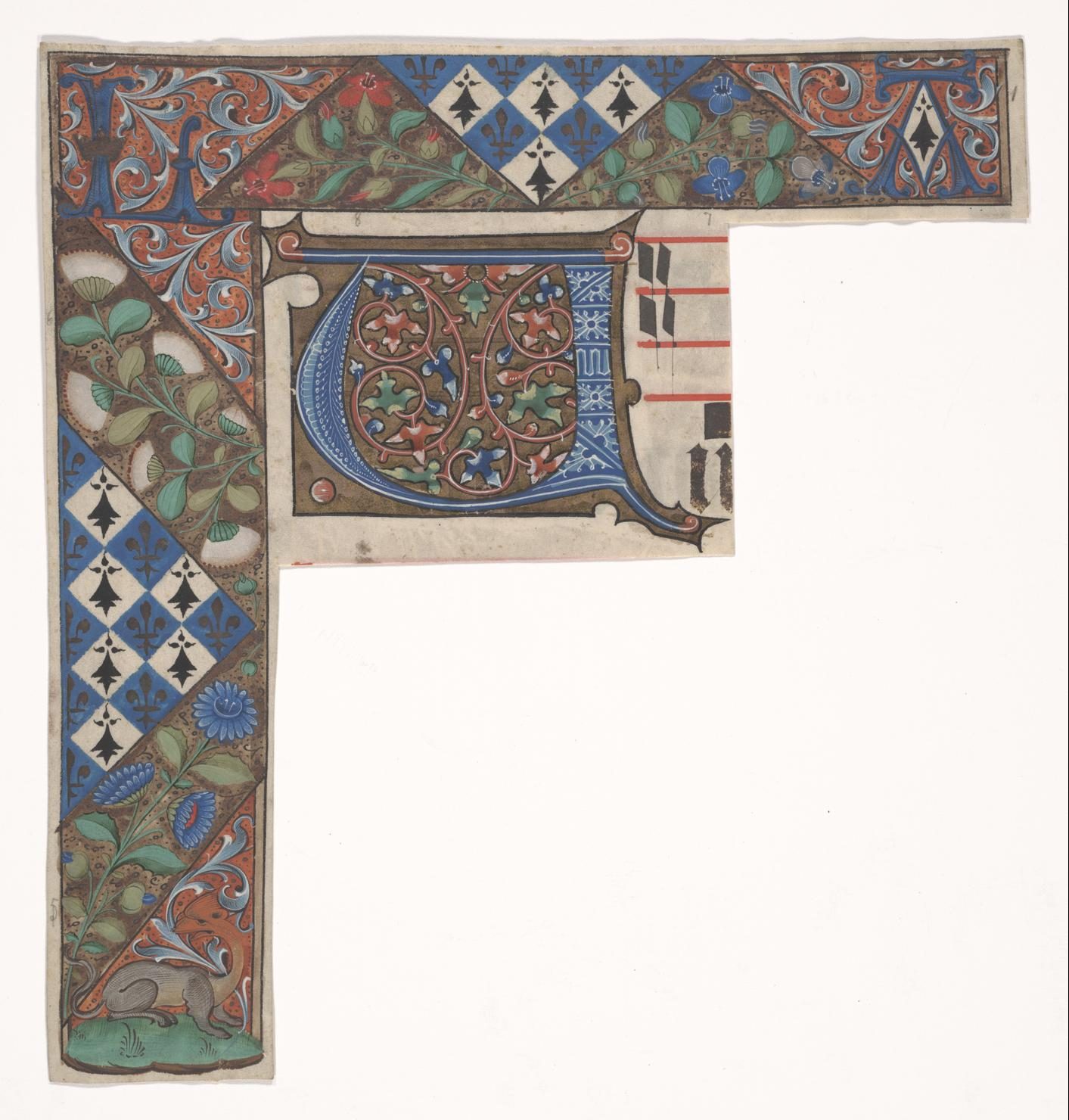 By great coincidence, the Free Library of Philadelphia holds a cache of items related to the famous royal couple. These include a stamped leather binding (Lewis E 65), decorated with fleurs-de-lys and ermine tails, and a Book of Hours with an inscription naming the king (Lewis E 126). More directly related to the king and queen are four calendar leaves from an impressive Book of Hours made for Louis XII shortly after his accession to the throne (Lewis E M 11:19, 11:20, 11:21, and 11:22), and a single leaf from a smaller Book of Hours with an inscription attributed by Roger S. Wieck to the queen herself (Lewis E M 11:15A).1

While the reverse side of our fragment does not contain sufficient text to identify the particular feast from which it is drawn, the upper margin does contain the original folio numeration, CXIX or 119, giving us an indication of the original leaf’s location within the volume as a whole. 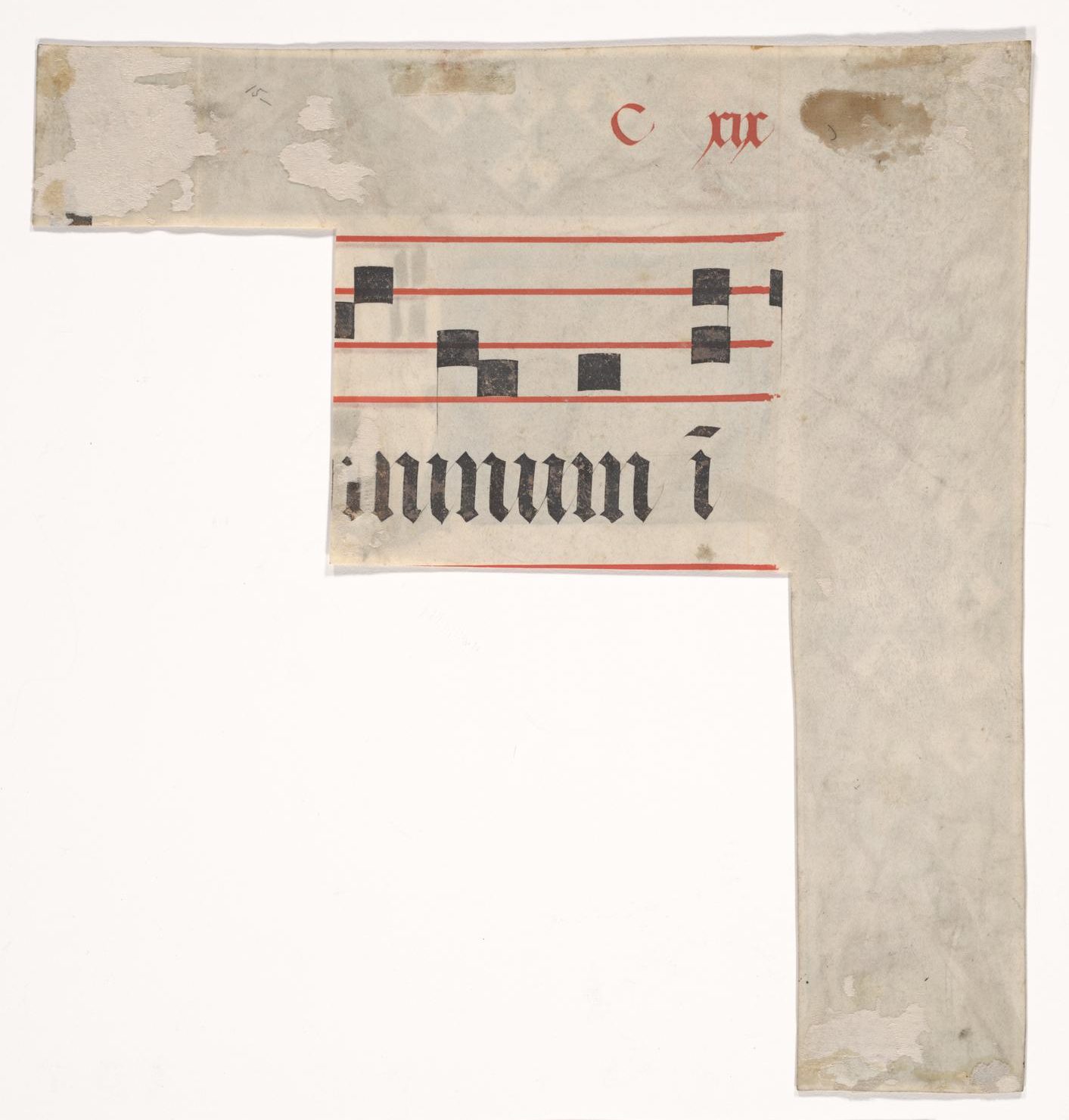 The precise origins and early history of this important volume are not known, but it was said to have been broken up as early as 1840.[efn]Antoine Le Roux de Lincy, Vie de la reine Anne de Bretagne, femme des rois de France Charles VIII et Louis XII: suivie de lettres inédites et de documents originaux (Paris: Curmer, 1860–61), vol. 2, 86.[/efn_note] Among the miniatures that survive is one that is today in the Musée Dobrée, Nantes, which shows the king and queen in prayer before the Crown of Thorns, that quintessential symbol of Valois kingship. The miniatures have variously been attributed to Jean Pichore, the Master of Philippe de Gueldres, and Jean Coene, but the border decorations are probably by one or more distinct, anonymous illuminators.

Many other fragments from the Gradual are known, and Christopher de Hamel provides a helpful list of these in a 2010 catalogue entry for one found in the Lilly Library.2 Of the five strip-like fragments in Bloomington shown below (image from Digital Scriptorium), that on the left shows a striking resemblance to the designs in the Free Library’s corner fragment. Though the palette is different, note the position of the crown around the shaft of the initial L and the ermine-tail fill in the center of the initial A. Altogether, such fragments give an idea of the playful variety of inventive designs used in the volume’s marginal decoration. 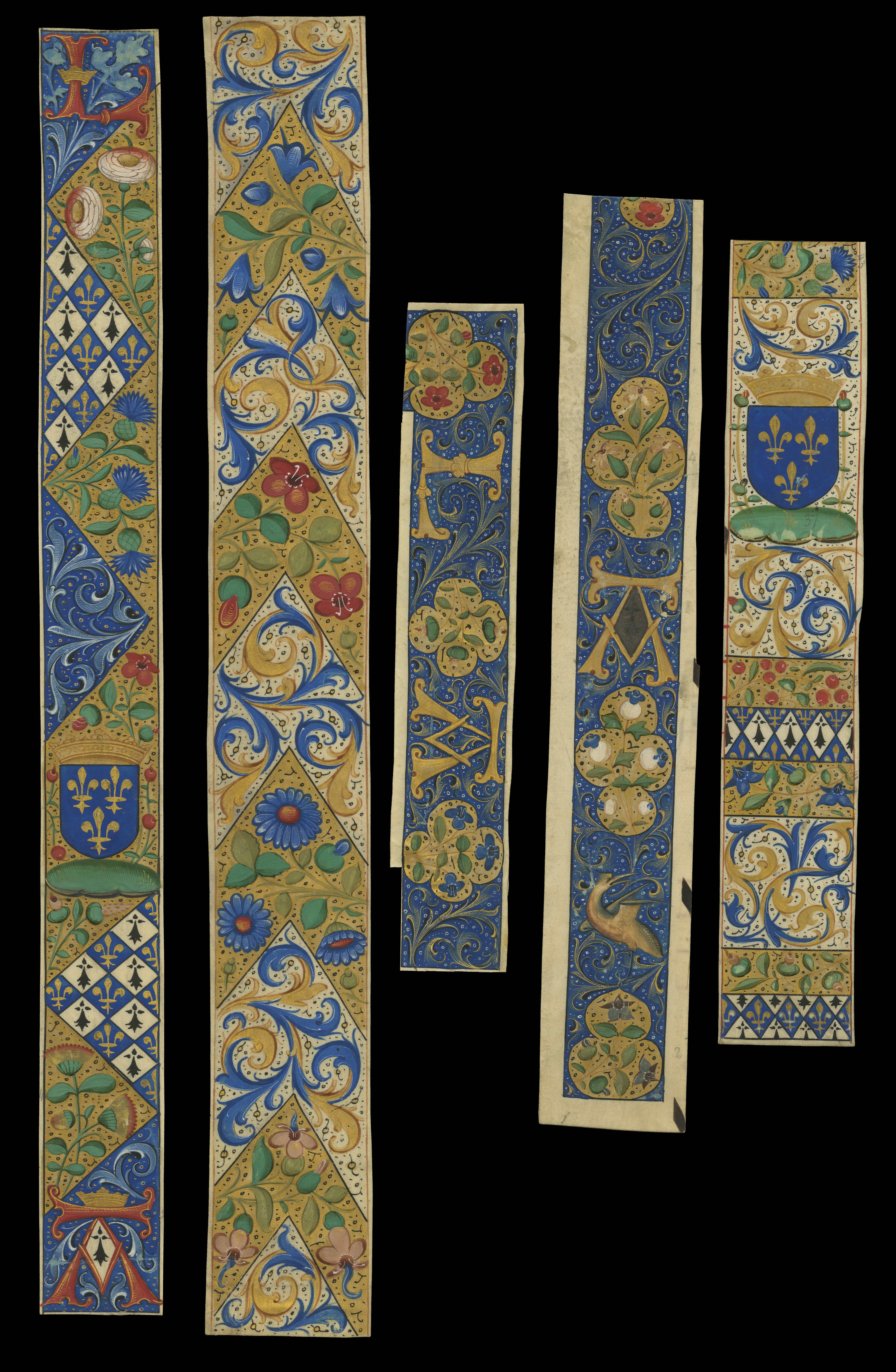 A nearly complete page with similar but not identical corner ornamentation, including the reddish-brown background color, survives in Wellesley College Special Collections. A full page with a historiated initial of the Ascension of Mary Magdalene was auctioned at Sotheby’s in 2016, following sales of smaller fragments in 2013 (all of which can be added to de Hamel’s list).3 In the borders of the Wellesley leaf one can find the arms of France quartered with Milan, perhaps indicating that the manuscript was still being produced during the brief period when Louis was both King of France and Duke of Milan (6 September 1499–5 February 1500). The Sotheby’s leaf displays the arms of Orléans, which Louis used prior to his coronation on 7 April 1498. Louis and Anne married in January 1499, so the presence of their initials throughout these decorative borders suggests a subsequent date. From this evidence, we can surmise that the book was being produced (or at least decorated) over a number of years, or, alternatively, that it was being produced at a slightly later date, with its borders serving as a compendium of the royal couple’s previous heraldry. 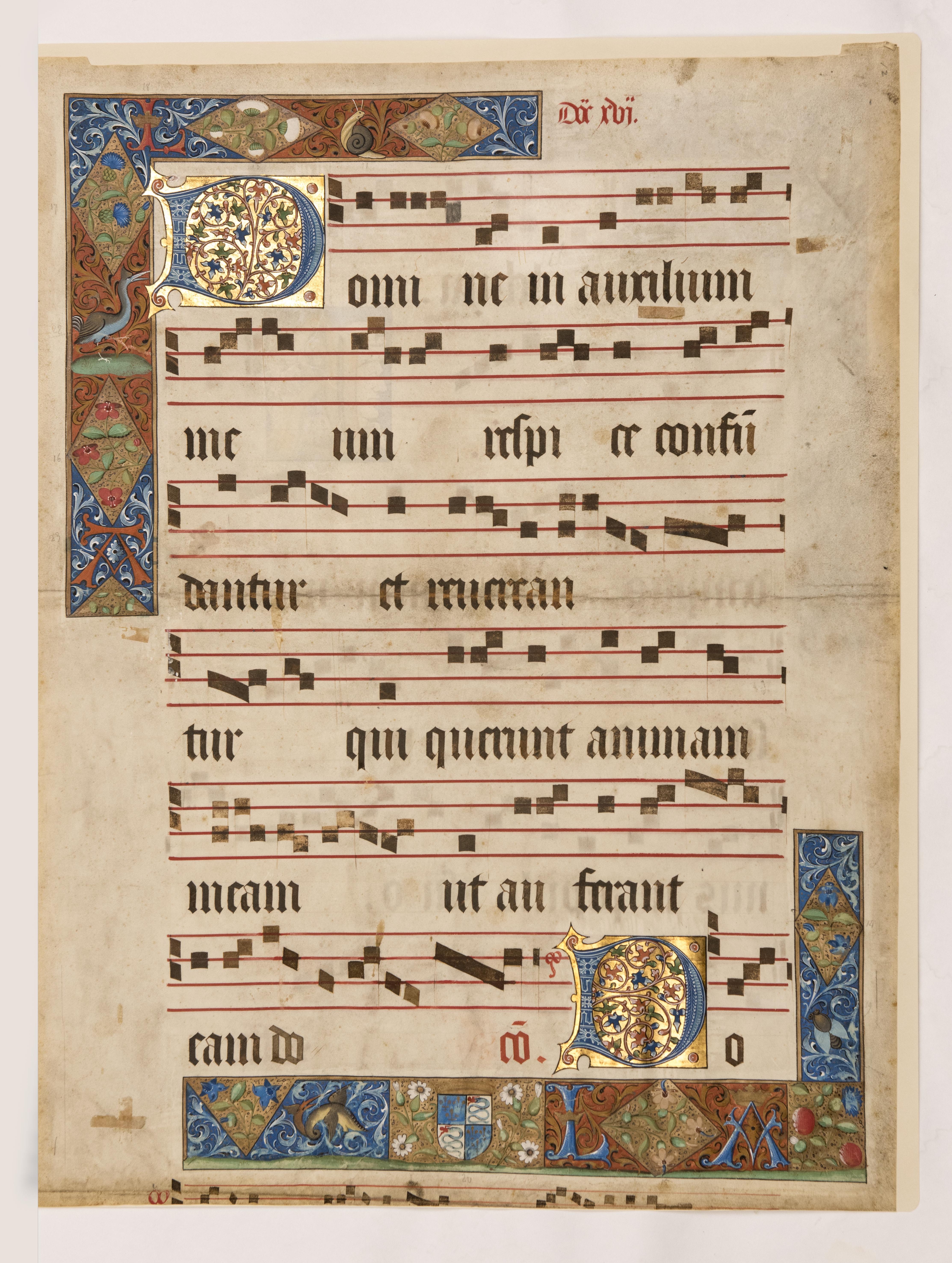 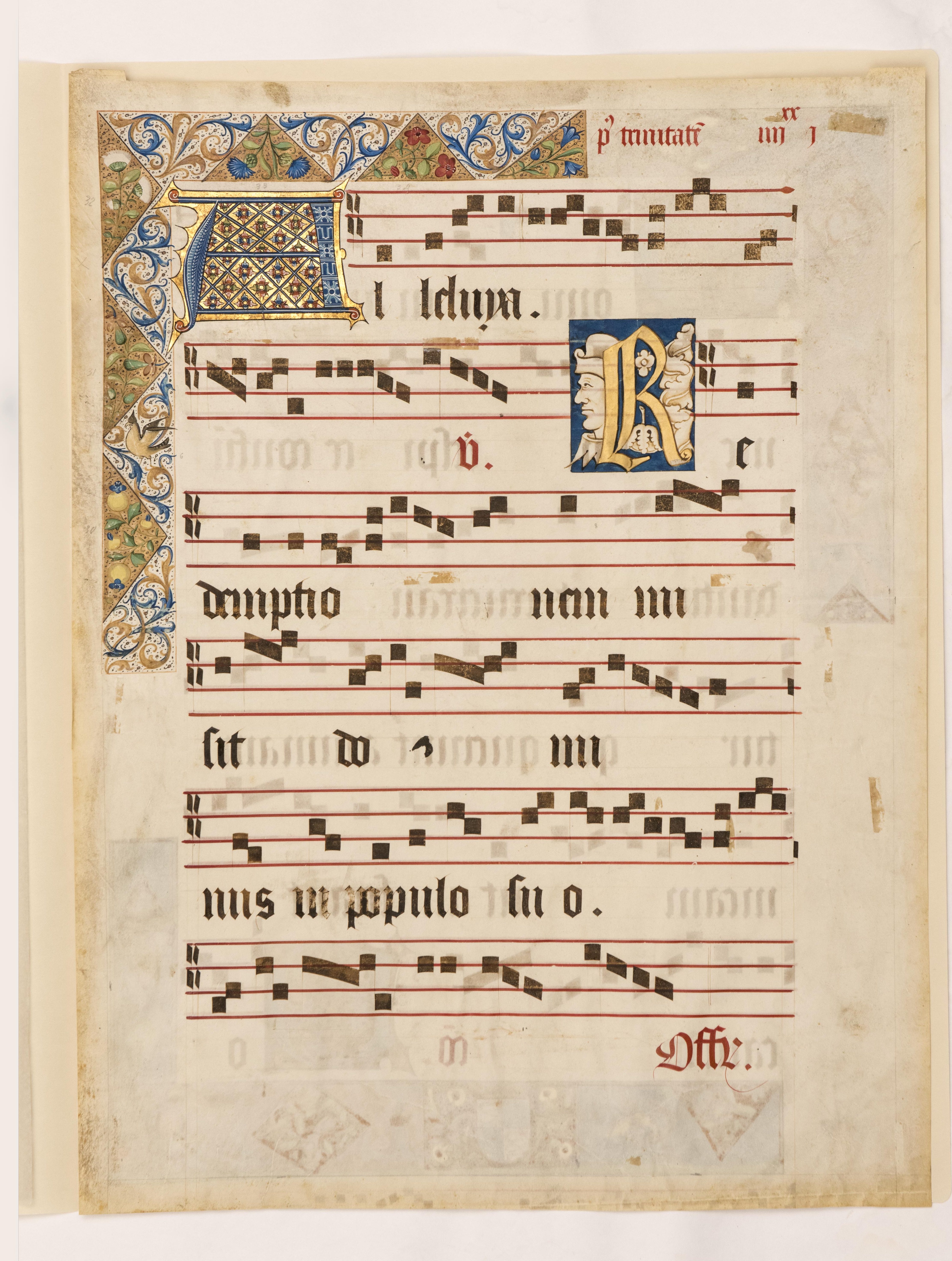 Leaf from the choir book of Louis XII and Anne of Brittany, Wellesley, Wellesley College Special Collections, MS 6, front and back 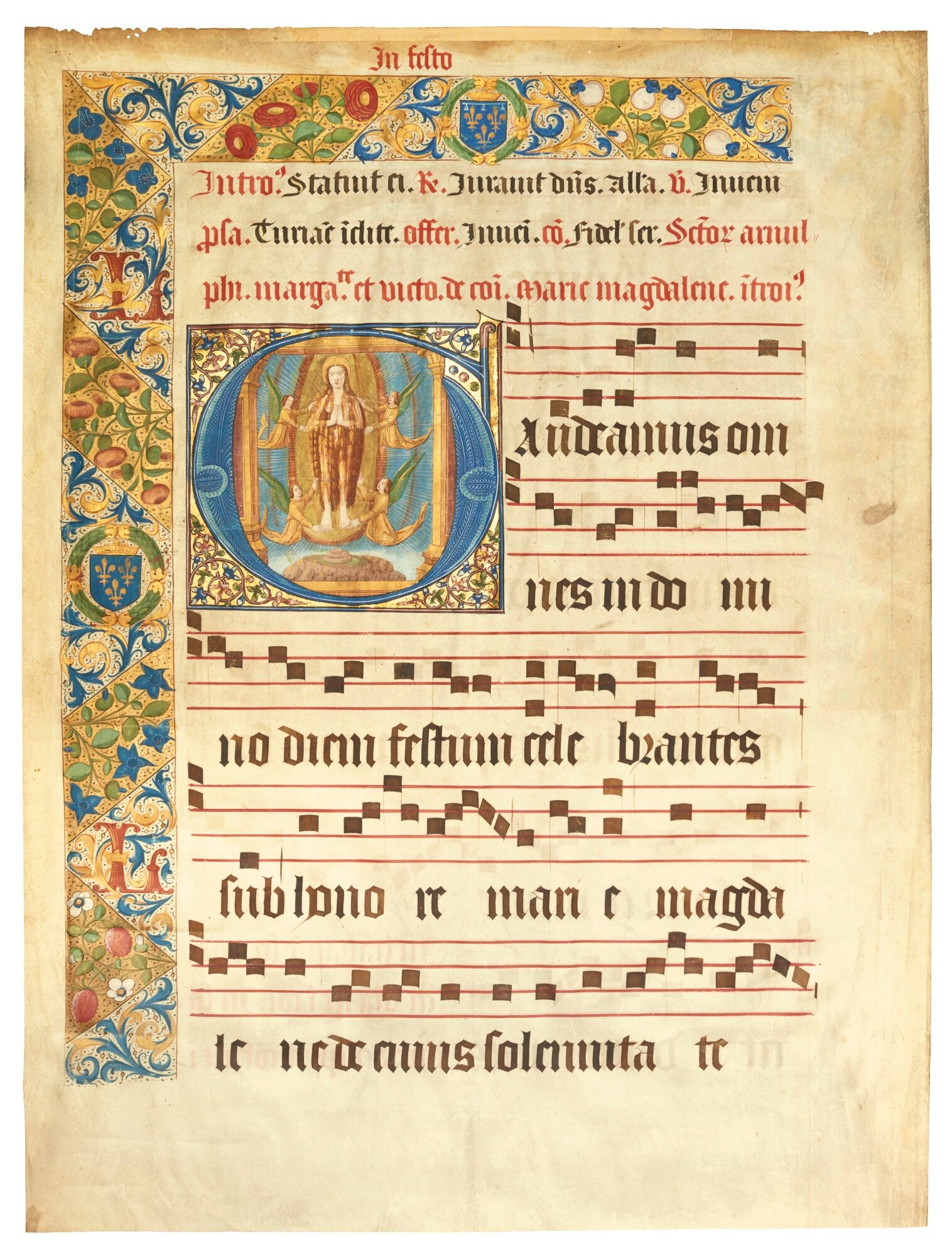 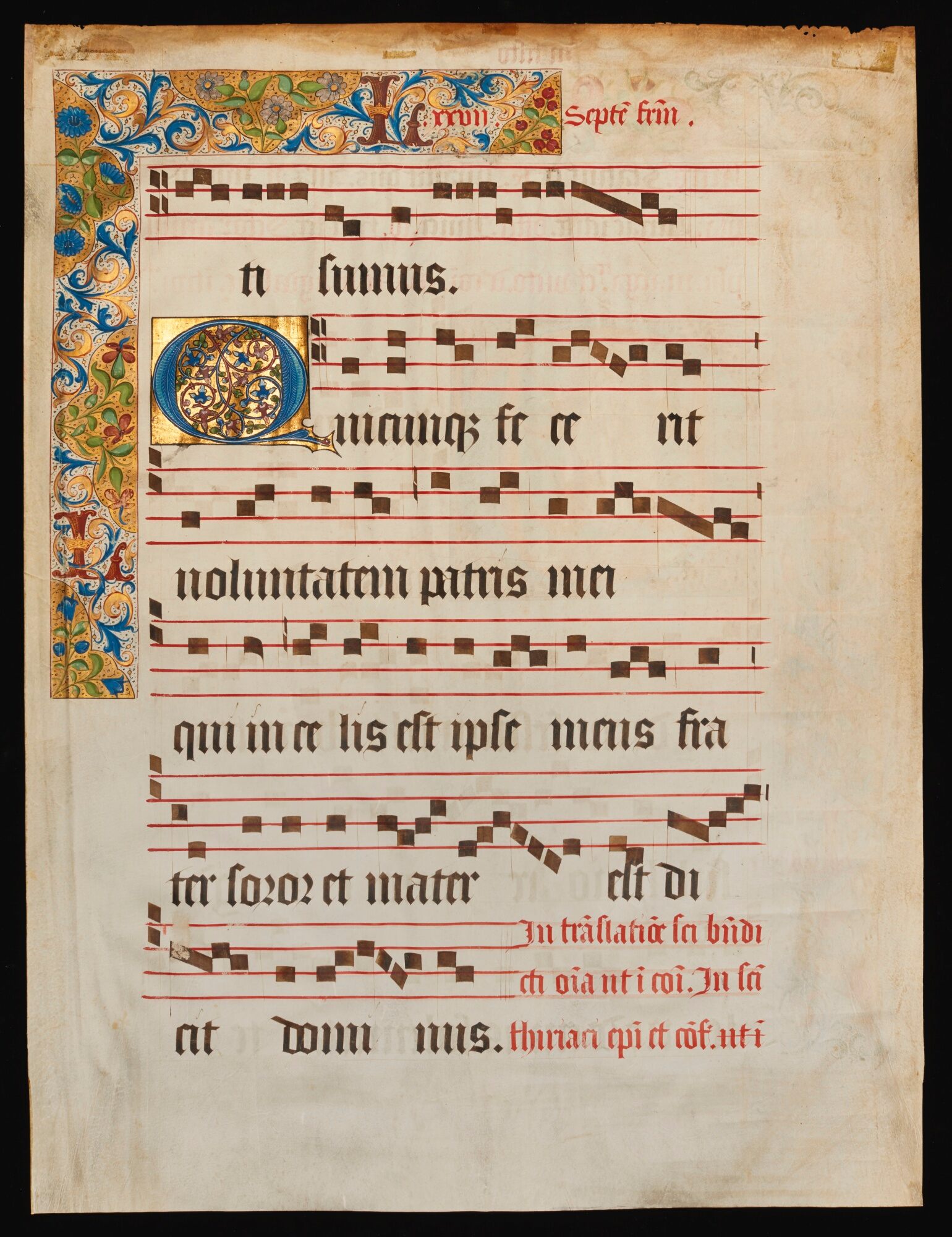 Leaf from the choir book of Louis XII and Anne of Brittany, Sotheby’s, London, 5 July 2016, lot 45, front and back

This post brings our series of 52 weekly discussions to its conclusion, but the discoveries related to the Bibliotheca Philadelphiensis project will no doubt continue. Many of the posts offer preliminary findings only, so in time it is hoped that readers will be able to amend, enrich, and correct. Please feel free to contact me with any queries or comments.

With thanks for your interest,