Fifty-two discoveries from the BiblioPhilly project, No. 14/52 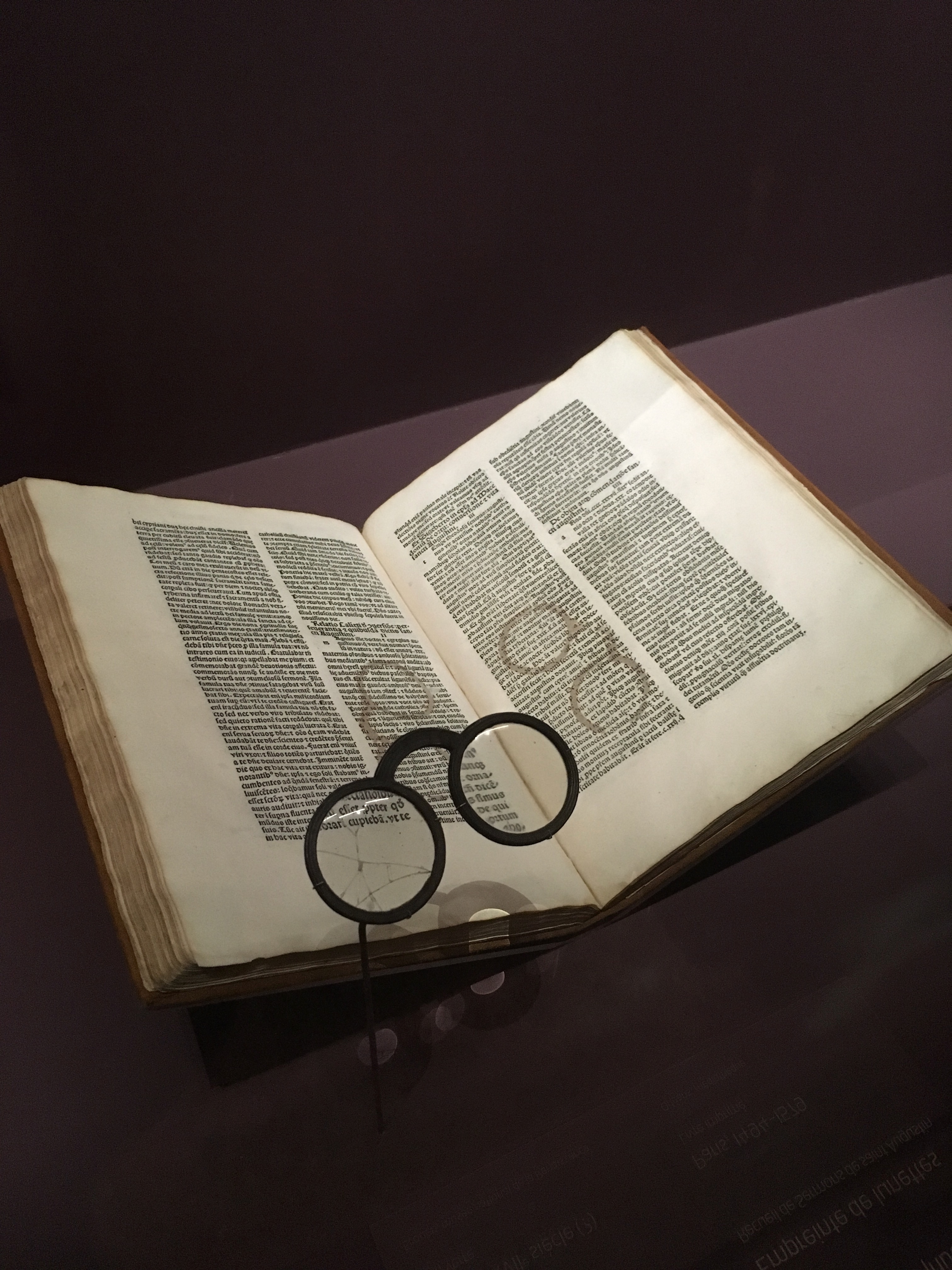 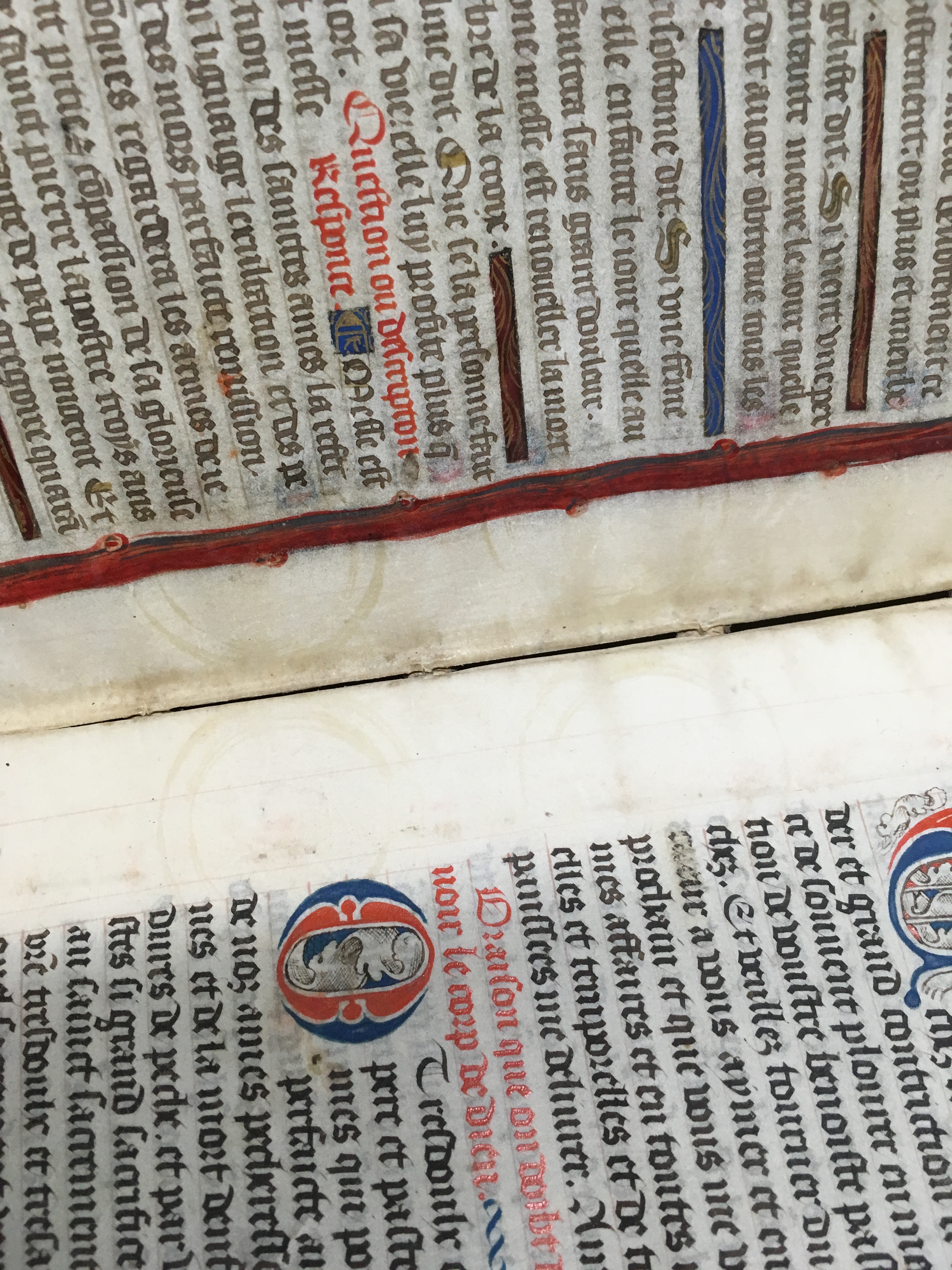 A volume with a rust stain from eyeglasses, presented with an actual pair of eyeglasses in front of it (exhibited in Le verre, un moyen-âge inventif, Musée National du Moyen-Âge-Thermes de Cluny, 20 September 2019 – 8 January 2018); Book of Hours for the Use of Rome, Philadelphia, Philadelphia Museum of Art, 1945‑65‑14, fols. 106v–107r (eyeglass imprints in the gutter)

The recent exhibition on glass in the Middle Ages (Le verre, un moyen-âge inventif, at the Musée National du Moyen-Âge-Thermes de Cluny) exhibited a famous rust-stain in an incunable caused by a pair of eyeglasses long forgotten inside the closed book.  The differential condensation of the metal frames around the lenses caused traces of oxidation to transfer to the paper surface over time. Presented evocatively in front of the book in the exhibition was an actual pair of late-medieval eyeglasses, excavated archeologically in a different context. Unsurprisingly, the original pair of eyeglasses responsible for the stain is long gone. And, in any case, since the incunable is a rather dry theological volume with few annotations, and the eyeglasses were left in for years, or possibly even decades or centuries, this is clearly the product of one-time forgetfulness. After all, how many items have we forgotten in our own books over the years? Less distinct, but perhaps more interesting, are multiple imprints of a single pair of glasses repeatedly left in an early-sixteenth-century French Book of Hours belonging to the Philadelphia Museum of Art (PMA 1945-65-14), which I discovered to my astonishment while showing the book to my students in October 2018. Though eyeglass frames could be made of metal or wood, the double-ringed imprints suggest that in this case the frames were made of leather: the six pairs of contemporary spectacles thought to have belonged to Willibald Pirckheimer (discovered behind a bookcase at Wartburg Castle in Eisenach, Germany, in 1867) have hard leather frames with distinct ridges along their inner and outer radiuses.1 One can imagine such objects producing exactly the kind of pattern we see several times in our own book, the faint outlines perhaps caused by the transfer of accumulated dirt and oil deposited on the frames. As is often the case with such subtle features on the parchment page, these imprints are more easily visible in person than through digital images, excellent though they may be. Two artificially enhanced images below show the double-circle patterns more distinctly. 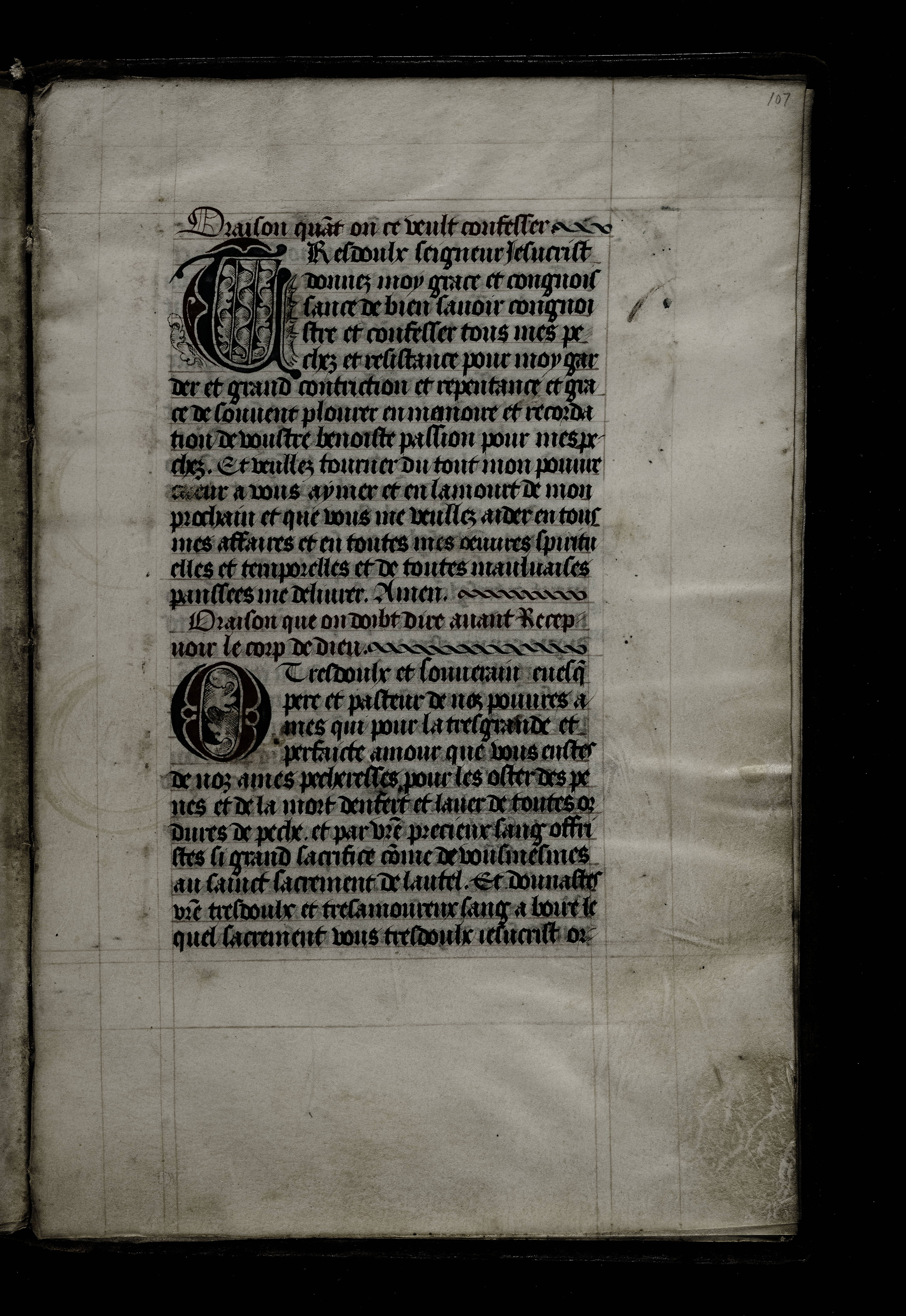 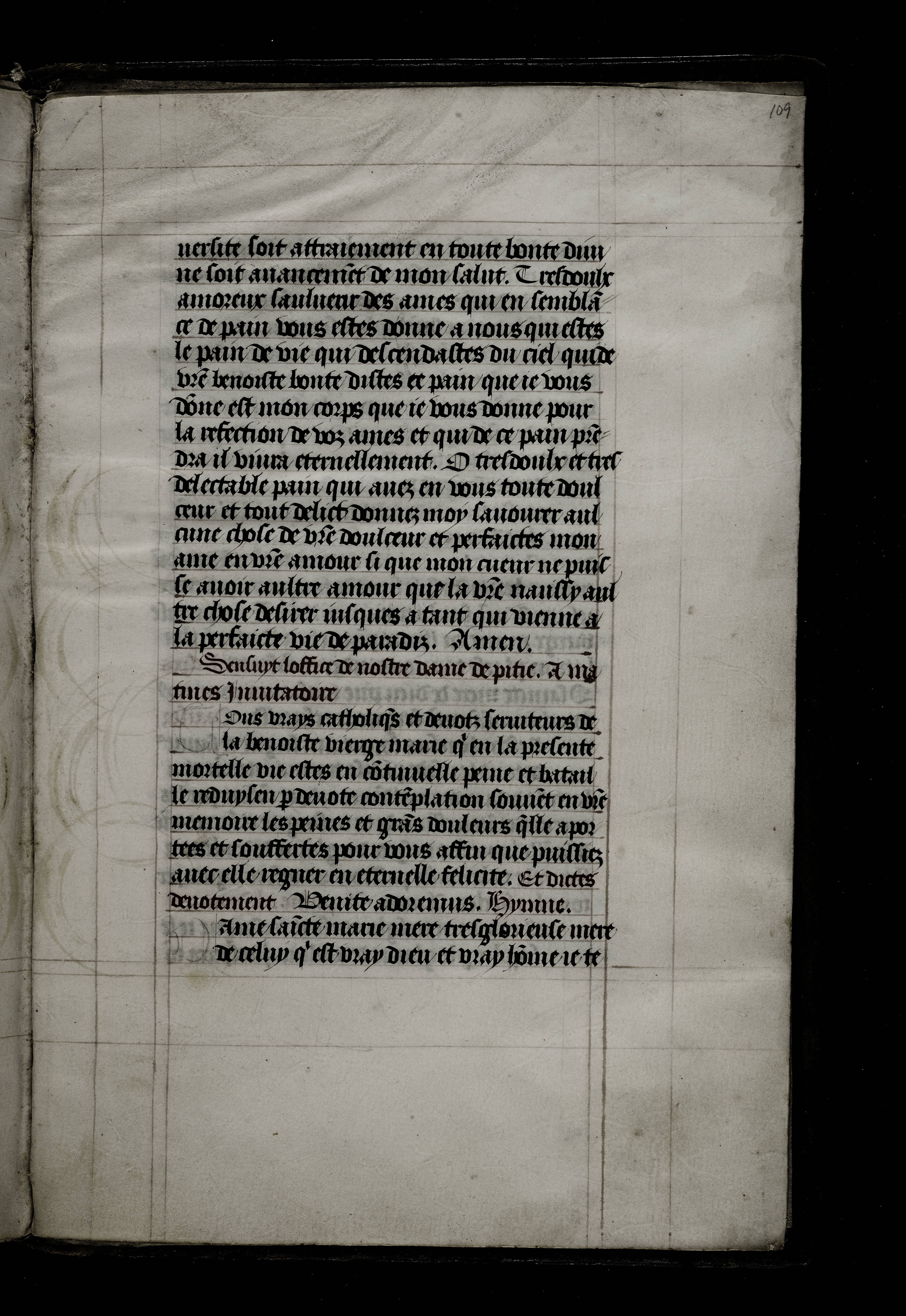 What is most fascinating about our example is that these circular traces all occur after the end of the primary texts in the Book of Hours, within a gathering written in a different script but undoubtedly added very close to the date of the main texts’ production (see the collation model within the Bibliotheca Philadelphiensis interface for more detail). The gathering contains prayers to be recited at specific points during the Mass: at Confession, before receiving the Host, and after receiving the Host. The absent-minded (or perhaps convenient) deposit of spectacles in the gutter of a book at such moments reminds us of Canon van der Paele’s famous likeness by Jan van Eyck.

More examples of spectacle imprints in manuscripts and early printed books survive than one might first imagine. As scholars begin to pay more attention to the usage histories of medieval and early modern books, discoveries of this sort continue to be made. One can assume that many more such traces, some fainter than others, survive undetected in books around the world. We even have numerous pairs of sixteenth-century eyeglasses that exist (outside of books), kept as souvenirs of distinguished users. The interest of the present discovery, however, lies in the fact that it occurs in a very particular point within a Book of Hours, and thus offers us the possibility to reconstruct a specific use context. While in the comfort of the user’s home there would presumably have been other places to leave one’s glasses, bringing the book to Mass required finding a safe place to put valuable spectacles between the recitation of Eucharistic prayers and the procession forward to receive the consecrated host. 1945‑65‑14, fols. 25v–26r (end of the “Ave cuius conceptio” prayer and beginning of the Hours of the Virgin; owner kneeling in prayer before the Annunciation)

As if this weren’t a specific enough context, the first owner of this book and the probable proprietor of these now-vanished spectacles is actually depicted in the book itself, in prayer, reading–glasses free–from a Book of Hours. What is more, his identity, never before pinpointed, can be deduced with near-certainty, along with that of the artist who painted the miniatures. But for this, you’ll have to wait for next week’s post!