Book of Hours, Use of Rome, Philadelphia, Free Library of Philadelphia, Lewis E 107, fols. 38v–39r (end of Gospel Lessons and beginning of Hours of the Virgin)

In cataloguing a rather late and somewhat scruffy Northern French Book of Hours from the first quarter of the sixteenth century, Free Library of Philadelphia Lewis E 107, I discovered some faint, barely legible inscriptions in the margins adjacent to some of the more unusual miniatures. In certain cases, these short texts are partially covered over by the shell gold and paint of the miniatures, proving that they were indeed production notes and not after-the-fact annotations. While there are no inscriptions next to the canonical scenes in the Hours of the Virgin (for example in the Annunciation for Matins of the Hours of the Virgin, fol. 39r, shown above), inscriptions do appear next to the relatively uncommon cycle of miniatures in the combined Hours of the Cross and Hours of the Holy Spirit. For example, for the scene of Christ presented as the Man of Sorrows (known as the “Ecce Homo” in Latin), the word “homo,” or man appears in the margin. 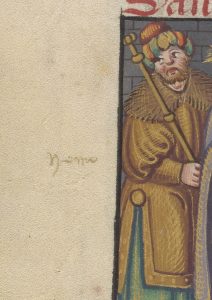 Book of Hours, Use of Rome, Philadelphia, Free Library of Philadelphia, Lewis E 107, fol. 101v (miniature of the Man of Sorrows with “homo” marginal instruction)

Elsewhere, the brief notations seem to have been partially rubbed away to erase them after the completion of the miniatures, rendering them hard to read. For the miniature showing the Resurrection, the Latin word “Resurrexit” seems to be partially discernible, though this is one instance where even the best digital (or analog) images don’t convey as much information as the first-hand examination of the page. 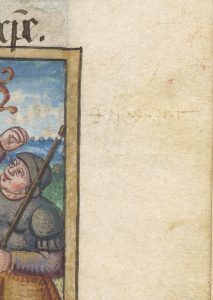 Book of Hours, Use of Rome, Philadelphia, Free Library of Philadelphia, Lewis E 107, fol. 108r (miniature of the Resurrection with “Resurrexit” marginal instruction)

In other cases, the accompanying words are almost illegible. They are scrawl-like, highly abbreviated, and typical of earlier instructions for illuminators in that they seem to condense iconographies into short phrases. These are quite different from the longer, more expository instructions, sometimes in the vernacular, that accompanied romances, histories, or arcane religious texts in the thirteenth and fourteenth centuries. The illuminator at work here apparently needed a helping hand: he had already deviated from normal practice in depicting the Circumcision at Nones in the Hours of the Virgin, instead of the canonical Presentation (of Christ) in the Temple. These, of course, are two distinct events in the New Testament narrative, though they occasionally came to be conflated in the Middle Ages and Renaissance. In our case, was this the result of specific instructions, local tradition, or mere oversight? Book of Hours, Use of Rome, Philadelphia, Free Library of Philadelphia, Lewis E 107, fol. 77r (miniature of the Circumcision of Christ in lieu of the habitual Presentation in the Temple)