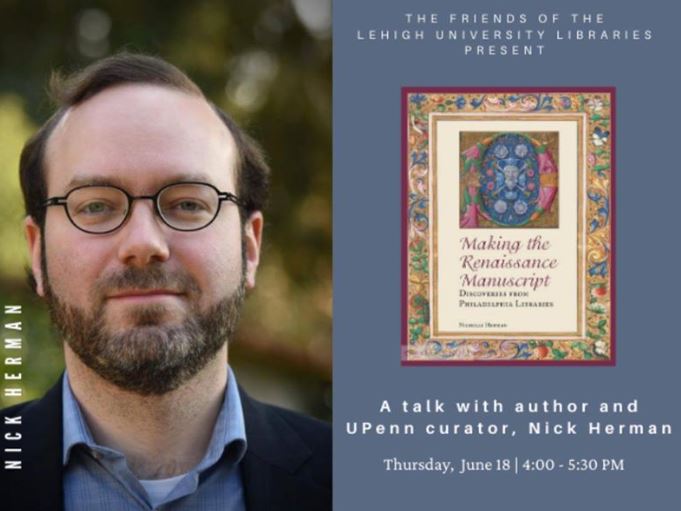 There was great excitement at the opening of the Penn Libraries’ exhibition, “The Making of the Renaissance Manuscript,” in February. Curator Nicholas Herman gave a compelling gallery talk to a spellbound audience, and it was sure to have a robust audience, especially when the Renaissance Society of America came to town in April.

Alas, fate had other plans. The library closed in March as the nation grappled with the COVID-19 pandemic. The Renaissance Society’s meeting was also cancelled.

About half of the approximately eighty manuscripts on display were digitized as part of the Bibliotheca Philadlephiensis  project, with the remainder drawn from the collections of the Kislak Center for Special Collections, Manuscript, and Archives at the Penn Libraries.  The exhibition examined the full intellectual and artistic depth of the fifteenth and sixteenth centuries through a varied selection of extraordinary manuscripts, cuttings, and incunables, many of which have never before been exhibited.  It was accompanied by an illustrated catalog.

Lehigh University, one of the principal partners in the project, is sponsoring a talk this coming Thursday (June 18), from 4:00-5:30 p.m. Dr. Herman will present a version of the talk he gave at the exhibition. For details and a link to register, view: https://ltsnews.lehigh.edu/june-18-friends-lehigh-libraries-talk-making-renaissance-manuscript-discoveries-philadelphia

The catalog, now in its second printing, is expected to be available later this month. Order it here: https://www.oakknoll.com/pages/books/134574/nicholas-herman/making-the-renaissance-manuscript-discoveries-from-philadelphia-libraries