Fifty-two discoveries from the BiblioPhilly project, No. 12/52 Book of Hours, Use of Rome, Philadelphia, Philadelphia Museum of Art, Department of Prints, Drawings, and Photographs, 1945‑65‑11, beginnings and miniatures for suffrages to Saint John the Evangelist and Saint Anthony Abbot, pp. 277 and 279

Last week, we looked at the fanfare-style binding of a dainty yet otherwise apparently relatively unremarkable Book of Hours produced in France in the mid-fifteenth century. Yet the book’s pages actually contains a whole variety of additional clues as to its early use. These seemingly small traces showcase several of the kinds of early ownership information we can sometimes extract when we look closely at a Books of Hours. Amazingly, all of this evidence existed within the book before it was given its current, eye-catchingly tooled binding at the end of the sixteenth century. 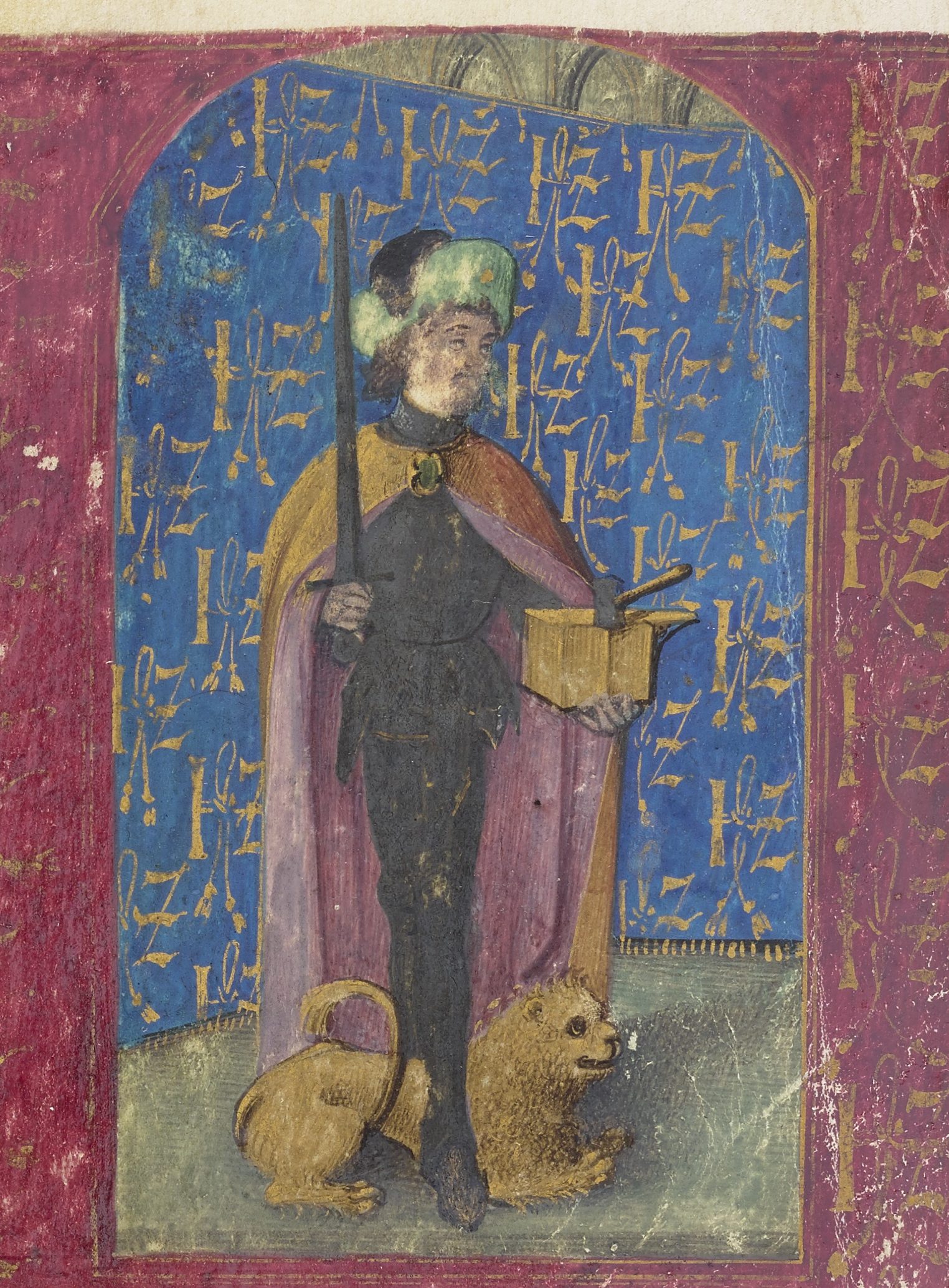 For example, a full-page miniature on the book’s final page bears a handsome-yet-damaged image of Saint Adrian of Nicomedia (recognizable by his anvil and lion), backed by a cloth-of-honor set within a Gothic architectural space and surrounded by an emblematic border, each bearing the unidentified interlaced initials “I-Z.” A coat-of-arms, unfortunately obliterated, is set below the miniature. This image was likely added to the book in the last two decades of the fifteenth century, either in Northern France or the Netherlands, judging by the general style of the miniature. The specific details of Adrian’s fur-lined cap and armor, the latter painted with powdered silver pigment that has oxidized to black, also point to a date slightly before the year 1500. Note the similarities and differences with this image of Saint Adrian by the Master of Jacques of Luxembourg, dated to between 1466 and 1470. 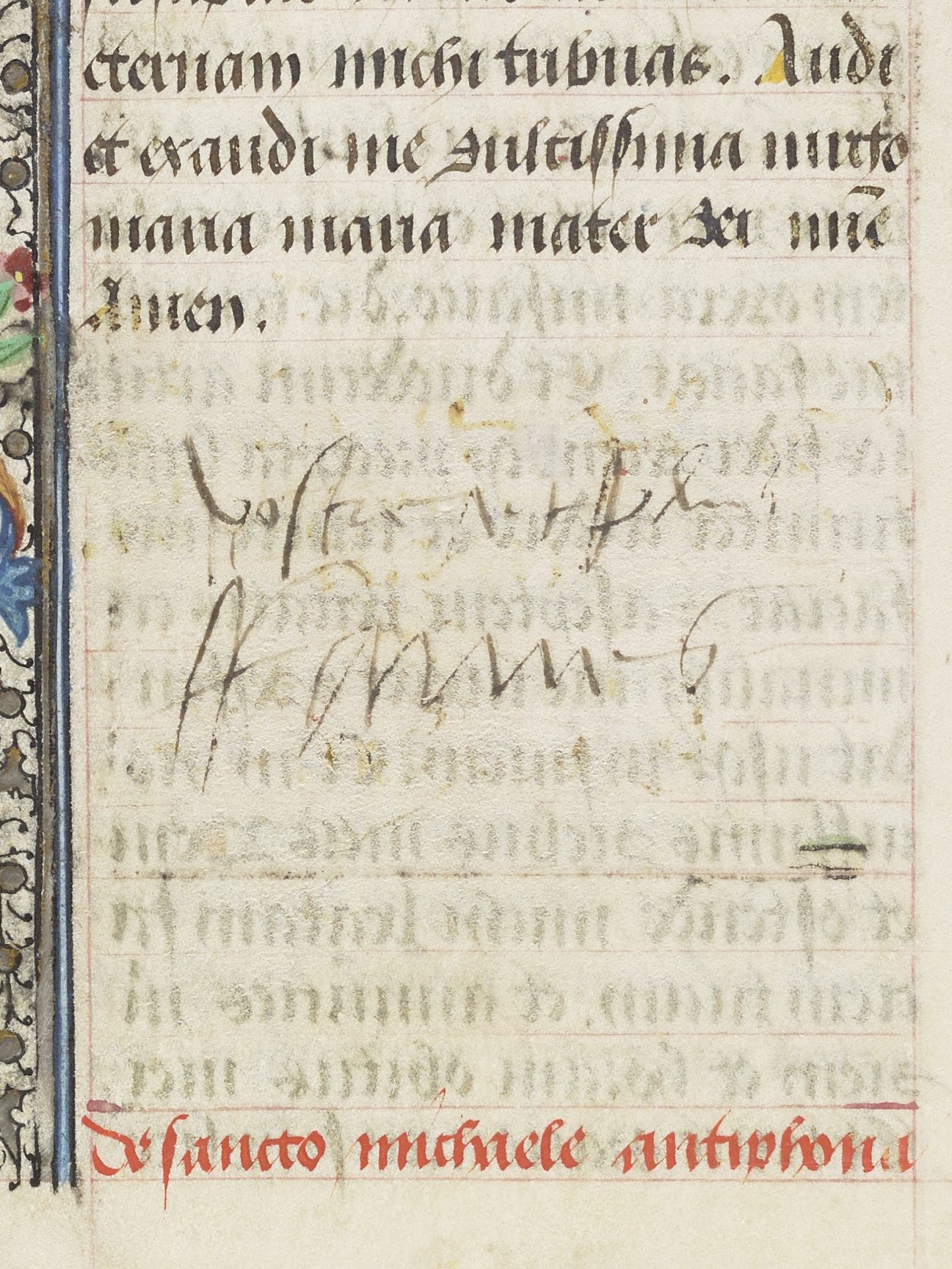 On page 262, the book contains a crude, barely decipherable ownership inscription that seems to read: “Votre serviteur Jeanne.” A suffrage to Saint Michael is indicated by a rubric on this page, but it has been excised. Clearly, the book was subject to some modifications early in its lifetime. There are also a number of prayers added to the text by an early, yet not original hand, mostly relating to the Conception of Christ. Most interesting of all are two details, both on p. 34. In a careful but not necessarily professional hand, in Italian, we read “La nostra cara sorella che ne ama più che si stessa Hippolyta Maria duchessa de Calabria.” If this is an ownership mark, it must refer to either Ippolita Maria Sforza (1446-1484), wife of Alfonso, Duke of Calabria, or her granddaughter, Ippolita Sforza (1493-1501), who died at the tender age of eight while engaged to Ferdinand of Aragón, Duke of Calabria. Is it an autograph signature, however, or is it merely making reference to “our dear sister who loves others more than herself”? More research into the handwriting of these individuals may provide an answer. 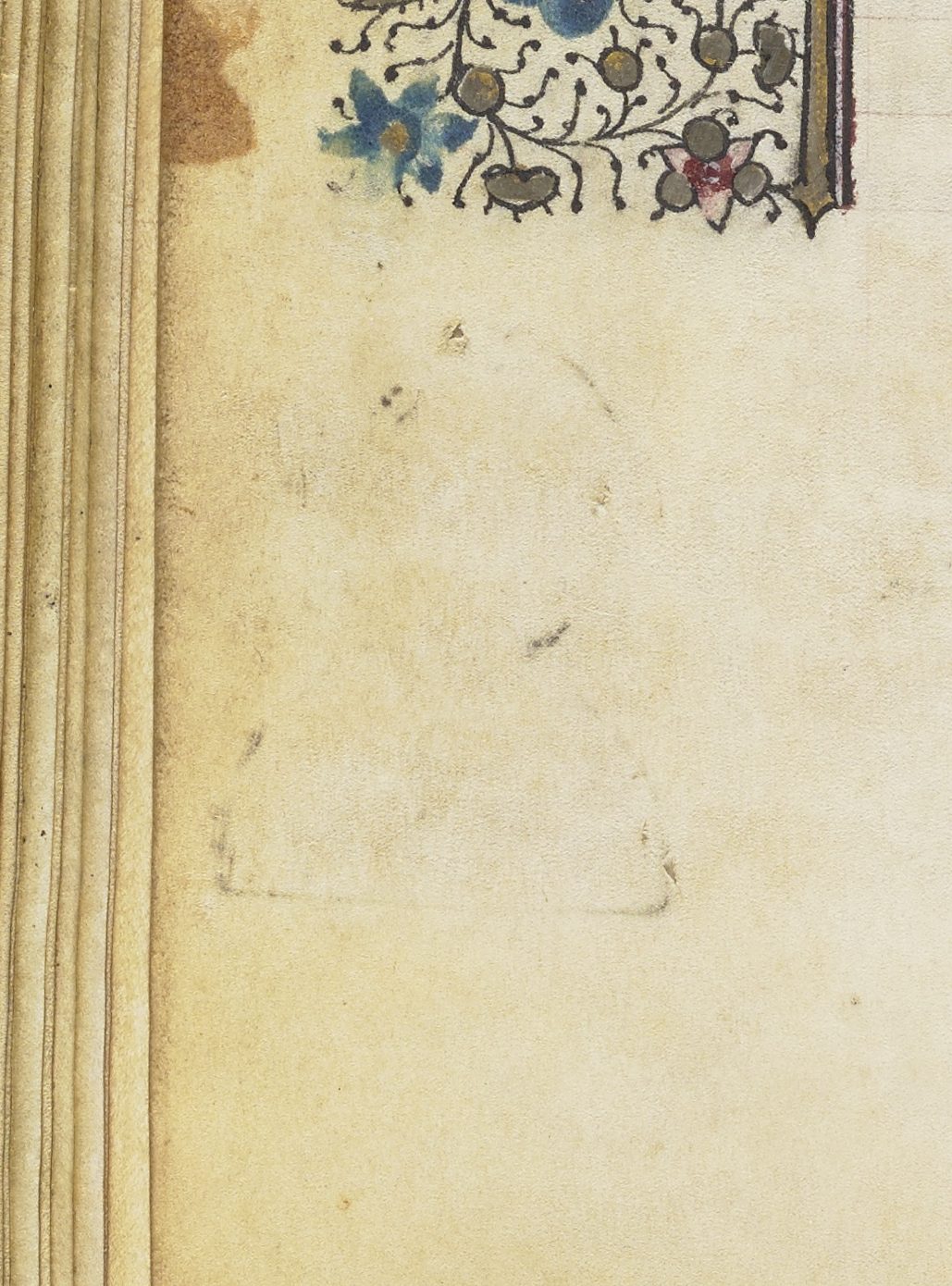 But perhaps most remarkably of all, on the lower left side of the same page as the Italian inscription, a faint, bust-shaped mark is visible. This pattern is the outline of sewing holes once used to attach a lead or tin pilgrim’s badge to the page. This practice is attested in other, much more famous books, and it migrated into virtual marginal representations in certain Netherlandish Books of Hours as well.1 Below are examples of: A), actual pilgrim badges still sewn into the flyleaves of a book; B), multiple offsets of pilgrim badges similar in appearance to ours, and: C), illusionistically painted badges in the border of a so-called Ghent-Bruges style manuscript. Perhaps a detailed look through the Kunera pilgrim badge database will yield some potential candidates for badges that might match our (former) badge in terms of shape and size. As is evident from the pattern left on the page, it consisted of a haloed head and bust, possibly representing Christ. Happy hunting, insignophiles! 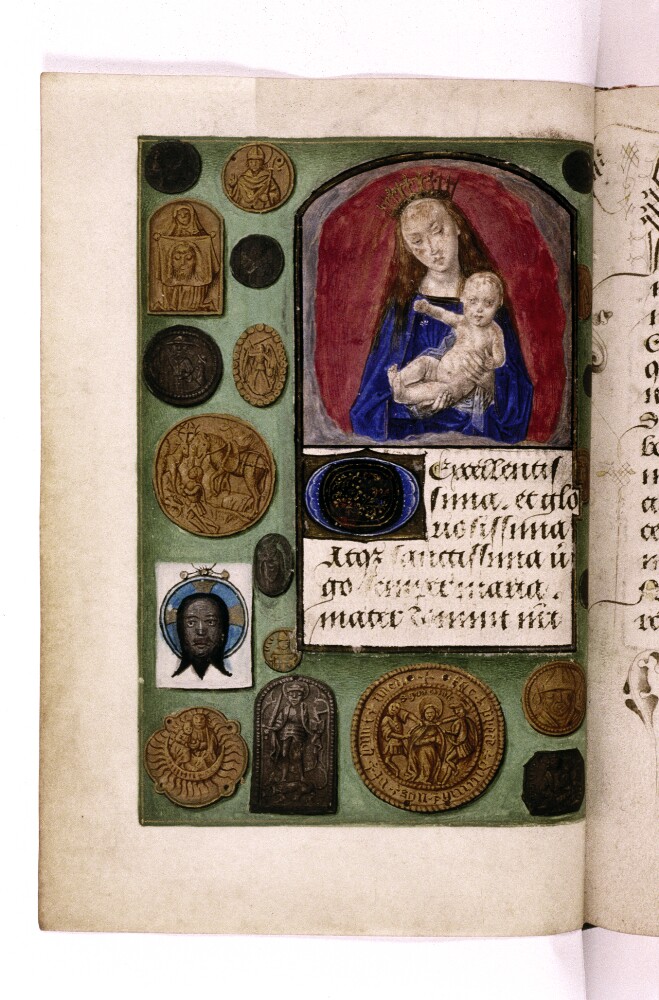