This book, Lewis E 205, consists of an unpublished Italian devotional treatise, composed in question-and-answer form, entitled the Stella di Salute (Star of Salvation). The author, as stated in the introductory rubric (fol. 1r), is a Franciscan friar from the province of the Marche by the name of Santi de Bon Cor (unless this was a convenient pen name!). The text was composed, according to the rubric, on the twenty-fifth day of February, 1450. It is unclear whether the present copy is contemporary or slightly later in date; its script and style of decoration appear to be from the mid-fifteenth century. The book is written in an elegant, Southern Textualis or Rotunda script. The colophon on fol. 205v states that the scribe’s name was Faustino, unfortunately a rather common first name in fifteenth-century Italy. 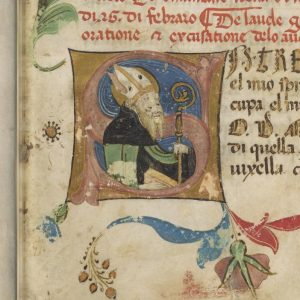 The text begins with an illuminated first page containing a historiated initial S depicting a haloed bishop, though it is unclear who this might be intended to represent. A manuscript with the same text and with a similar number of folios, but apparently with more lavish decoration, is listed in Hans Folnesics’ survey of illuminated manuscripts in Dalmatia.[2] In Folsesics’ corpus, which was published in 1917, the sister manuscript is described as being housed in the library of the State Italian College of Zadar (Gimnasio superiore di Zara), at a time when Zadar was still part of the Austro-Hungarian empire. Today, of course, Zadar is in the Republic of Croatia, but throughout the Middle Ages and early modern period it was closely linked to the Eastern coast of Italy and the Marche region via the Adriatic. Interestingly, the Zadar manuscript’s opening miniature is described as being quite a bit more complex, showing the Franciscan author embracing the bow of a ship named “gentil navicella,” upon which the figure of a woman stands, holding a rosary and pointing upwards to the Redeemer. If any readers are aware of the present-day location of this related manuscript, please do let us know!