Fifty-two discoveries from the BiblioPhilly project, No. 31/52 Denis Faucher, manuscript additions to Hendrik Herp, Speculum perfectionis (Mirror of Perfection), Venice: Sabio, 1524; University of Pennsylvania, Ms. Codex 1620, fols. 1v, miniature of a Nun on a Cross, and 3r, miniature of the Mememto mori, both by Denis Faucher, after 1524

As we approach the end of October, we interrupt our regularly scheduled blog posts to bring you a seasonally appropriate reminder of the grisly fate that awaits us all. This week, we delve into an item from the University of Pennsylvania’s holdings (not formally within the Bibliotheca Philadelphiensis project but closely associated with it, and now accessible through the main BiblioPhilly interface), a sammelband or hybrid volume that consists of a printed book sandwiched between two manuscript gatherings. Despite the extraordinarily morbid imagery present in these hand-written and illuminated sections, the book in question has been little studied to-date, despite the fact that we can name its author (who was also its scribe and artist) with great precision.

The printed core of the book is an edition of the fifteenth-century Franciscan mystic Hendrik Herp’s Mirror of Perfection issued in Venice in 1524. The two eight-folio manuscript quires that bookend it contain texts authored by Denis Faucher (1487–1562), a mystical poet and Benedictine monk with close links to the South of France. Faucher’s authorship was deduced by Norman P. Zacour and Rudolf Hirsch in their catalogue of the manuscripts of the University of Pennsylvania, published in 1965.1 They were able to locate the hymn to Saint Catherine, which begins “Festa lux mundo rutilans coruscat…” in the standard index of hymns, Ulysse Chevalier’s Repertorium hymnologicum.2 At numerous points in the manuscript portions, the rubrics tell us that the poems were written by a certain “Dionysius,” all but confirming Faucher’s identity.

Surviving information on Faucher’s biography is quite rich, and corroborates the notion that he actually transcribed and decorated his own devotional manuals.3 He was born in Arles and began his religious vocation in 1508 at the Benedictine monastery in Polinore, near Mantua, but was based for the majority of his career at the Abbey of Lérins off the coast of Provence, where he was elected prior in 1548. This storied island monastery was the subject of early monographs by Vincenzio Barrali (1613) and Mariano Armellini (1731), which discuss Faucher at length, and mention his activities as a spiritual advisor and provider of edifying religious texts to various mentors.4 Most fascinatingly, these sources also mention Faucher’s work as a scribe and johnny-come-lately illuminator.

The poems by Faucher present in the sammelband are mostly addressed to a scholasticate, a nun in the training period following the novitiate, and concern the attainment of spiritual perfection in the world. While hybrid books of print and manuscript could be useful for obtaining a customized set of literary texts, or for pairing mass-produced images with favorite prayers, they could also allow for spiritual advisors to add tailored content suited to pupils, in a manner reminiscent of the earliest thirteenth-century Books of Hours. Faucher’s interest in embellishing pre-existing books is confirmed by an intriguing manuscript, signed by him, that surfaced on the market in 2018. Formerly in the collection of Arthur and Charlotte Vershbow (see Riverrun Books & Manuscripts, Hastings-on-Hudson, catalogue 2, 2018, item 1), and now in a European private collection, it consists of an apparently unfinished fifteenth-century Book of Hours that has had its miniatures and border decorations entirely painted by Faucher in a colorful style that can be described as a mid-sixteenth-century re-imagining of a century-old illuminated book. Faucher’s intervention is attested by an autograph inscription, dated 9 April 1554, in which he offers the book to his brother Jean on condition that it remain in the family in perpetuity (“Semper apud Faucherios maneant.”). Remarkably, this Book of Hours is mentioned in Barrali’s early-seventeenth-century biography of Faucher. Barrali even transcribed a portion of the inscription, and stated that the book was not only illuminated, but also written, by Faucher (“Haec sunt horaria preces manu propria ipsius Dionisii scriptae & miris figuris penicillo subtiliter adornatae….”).5

As seen at the top of the post, Faucher’s poems in the Penn sammelband are accompanied by two striking images. The style is extremely close to the miniatures in the aforementioned Book of Hours, confirming that Faucher’s hand was responsible not just for the images but also for the texts as well. The first image shows a nun in a black habit being crucified, with a snake biting a heart, representing sin, entwined around her left arm (fol. 1v). The lit oil lamp the nun holds in her right hand represents faith and refers to the parable of the Wise Virgins (who tended their lamps). This remarkable iconography merits further study, as apart from its brief mention (and illustration–thanks to digitization) in a recent article on the figure of the crucified abbess in the New World, it is totally absent from art-historical literature.6 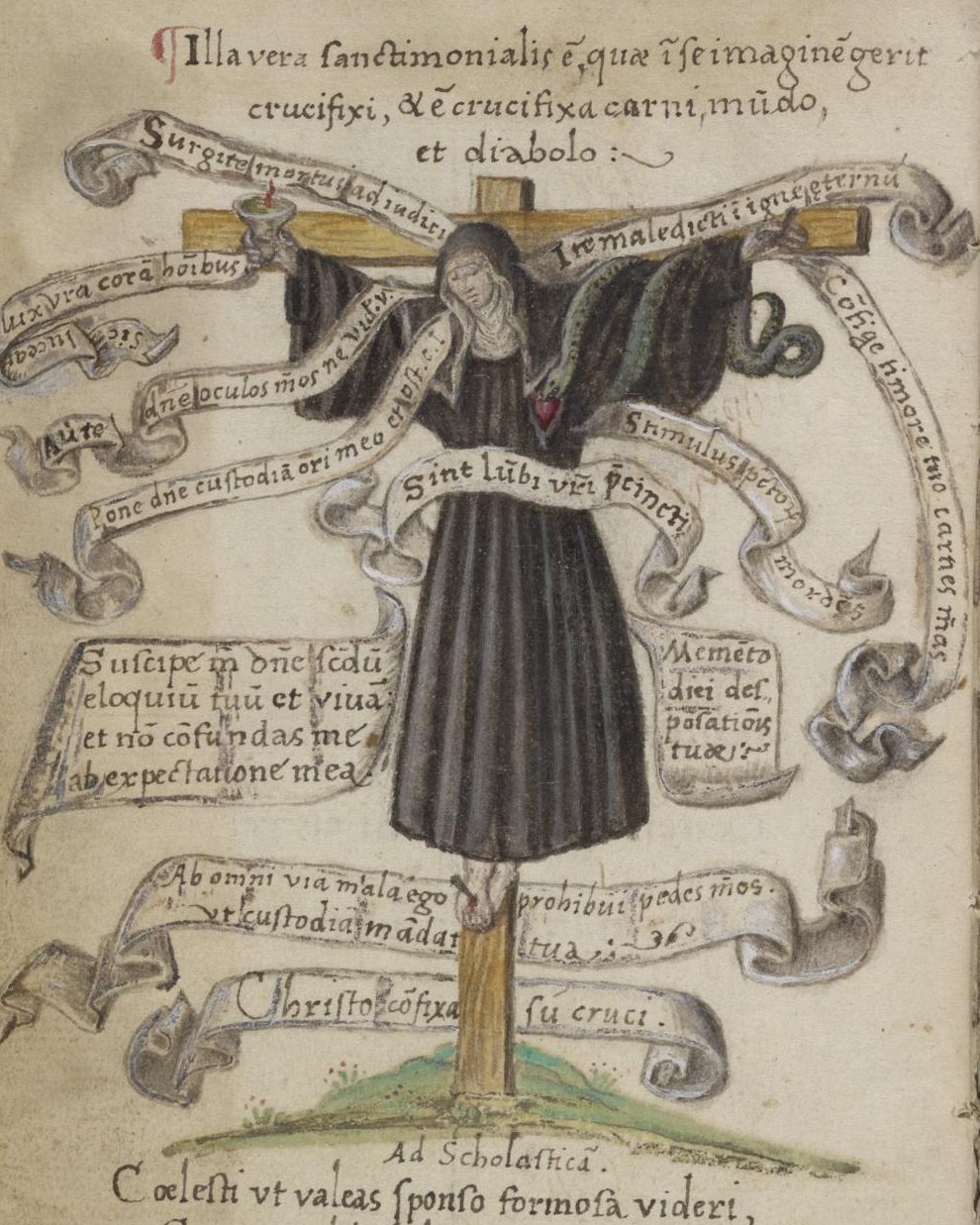 The four-line poem below can be roughly translated as: “The heavenly bridegroom, so that he could appear beautiful / Made this likeness of a chaste girl for your eyes. / Do not be pleased by her face, or lose your shame in front of what is shown here, / only pray now for those who are dead.”

The second image (fol. 3r) consists of a somewhat more conventional memento mori, at least pictorially. A medallion hangs from a stalk of lilies, its frame decorated with bones and pansies (pensées in French). At its center, a skull in a circular mirror is intended to invoke a sense of self-consciousness in the viewer’s mind. The scroll above the image bears a further moralizing extract from the Bible: “In all thy works, remember thy last end, and thou shalt never sin” (Ecclesiasticus 7:40). Similar scriptural quotations are found surrounding a painted skull in a manuscript addition to a printed Book of Hours of 1491 now in Cambridge University Library (Inc.5.D.1.19 [2530], fol. 4r). 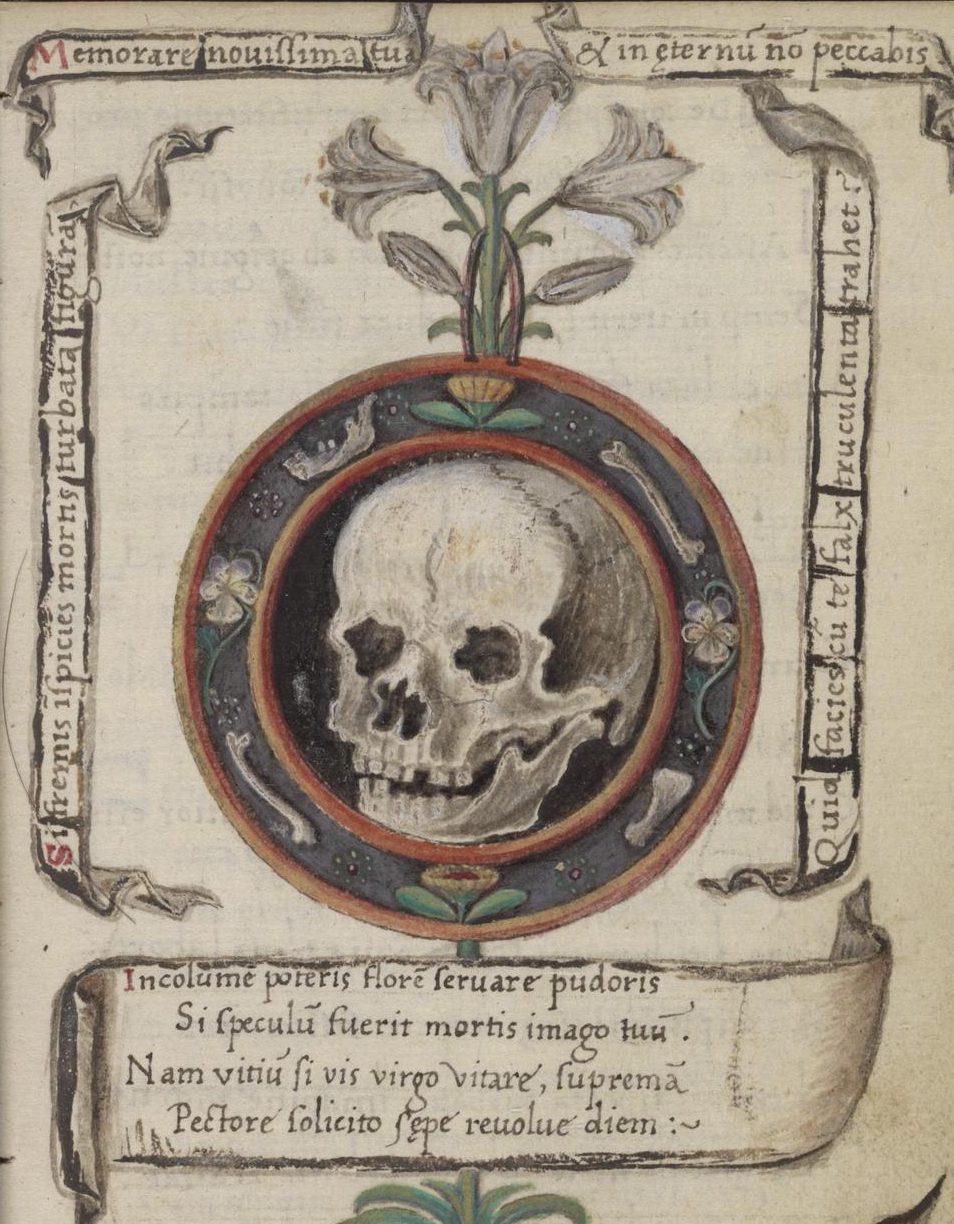 The two vertical scrolls, however, bear a unique message, likely authored by Faucher himself: “If you tremble in fear looking at this image of death, what will you do when he comes at you with the sickle?” (“Si fremis inspiciens mortis turbata figuram, quid facies cum te falx truculenta trahet?”). Interestingly, the verb faucher in French means to mow, reap, or knock down, and it comes from the Latin root falx (sickle, scythe) used in the verse. One wonders whether the author was indulging in a macabre pun. The large scroll directly beneath the image contains a quatrain that, in Barrali’s early-seventeenth-century history of Lérins,7 was ascribed to Faucher and said to be dedicated to “Anna de Boufremont,” possibly Anne de Bauffremont-Sennecey Abbess of Tarascon, suggesting that this otherwise obscure figure may have been the recipient of the present hybrid book, early in her career.

The final scroll is an adaptation of Saint Bonaventure’s exhortation: “When death comes, no one accepts it willingly, except for he who prepared for it, while living, with good works” (“Mortem venientem nemo libenter accipit, nisi qui se ad ipsam, dum viveret, bonis operibus praeparavit”).

All good things to keep in mind in the run up to All Saints’ Day. Happy Halloween!