Fifty-two discoveries from the BiblioPhilly project, No. 11/52 Book of Hours, Use of Rome, Philadelphia, Philadelphia Museum of Art, Department of Prints, Drawings, and Photographs, 1945‑65‑11, upper and lover covers (with “LUCRECE DU GUE” inscription)

A small mid-fifteenth-century Book of Hours now in the collections of the Philadelphia Museum of Art, PMA 1945-65-11, is housed in a beautifully preserved gilt-tooled à la fanfare binding that can be dated stylistically to the end of the sixteenth century. These distinctive and highly prized bindings are most closely associated with bookbinders working in Paris between about 1570 and 1630, and are identifiable by their geometrical “strapwork” designs, which are usually comprised of ribbons that feature a single gilt line on one side, and a double line on the other.1 The way that this design cue creates the illusion of relief on the surface of the cover is especially evident here.

This binding is particularly closely related to those associated with Clovis Ève (active between 1583 and 1633), a famous French bookbinder who became the fifth official “relieur du roi” (binder to the King), following the retirement of his father, Nicolas Ève. Clovis served the French Kings Henri III, Henri IV, and Louis XIII, producing some truly spectacular showpiece bindings. Nevertheless, attributions to him of simpler bindings such as ours remain controversial. Still, there are some clear similarities between our binding and others thought to have been made by Ève fils. Compare the layout and shape of the rectangular compartments and semicircular notches along the border with this example from the University of Amsterdam Special Collections Library, described by Pam van Holthe: 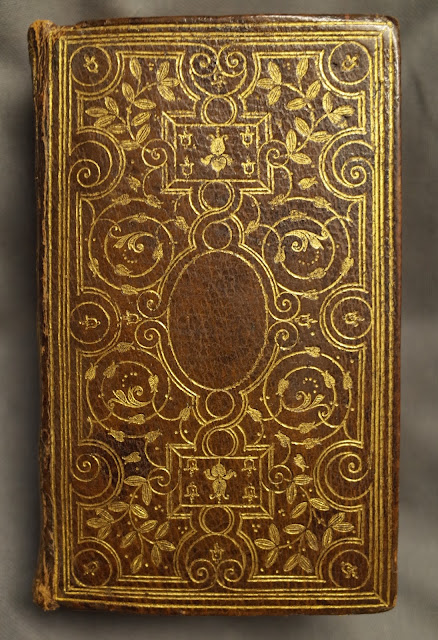 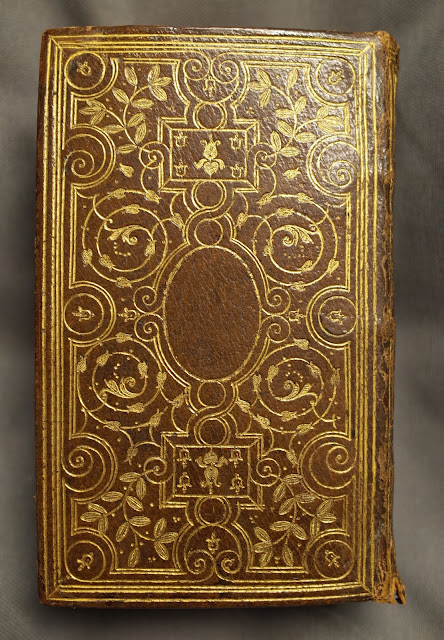 Or this, a less well-preserved specimen from the British Library (which similarly encloses a French Book of Hours): 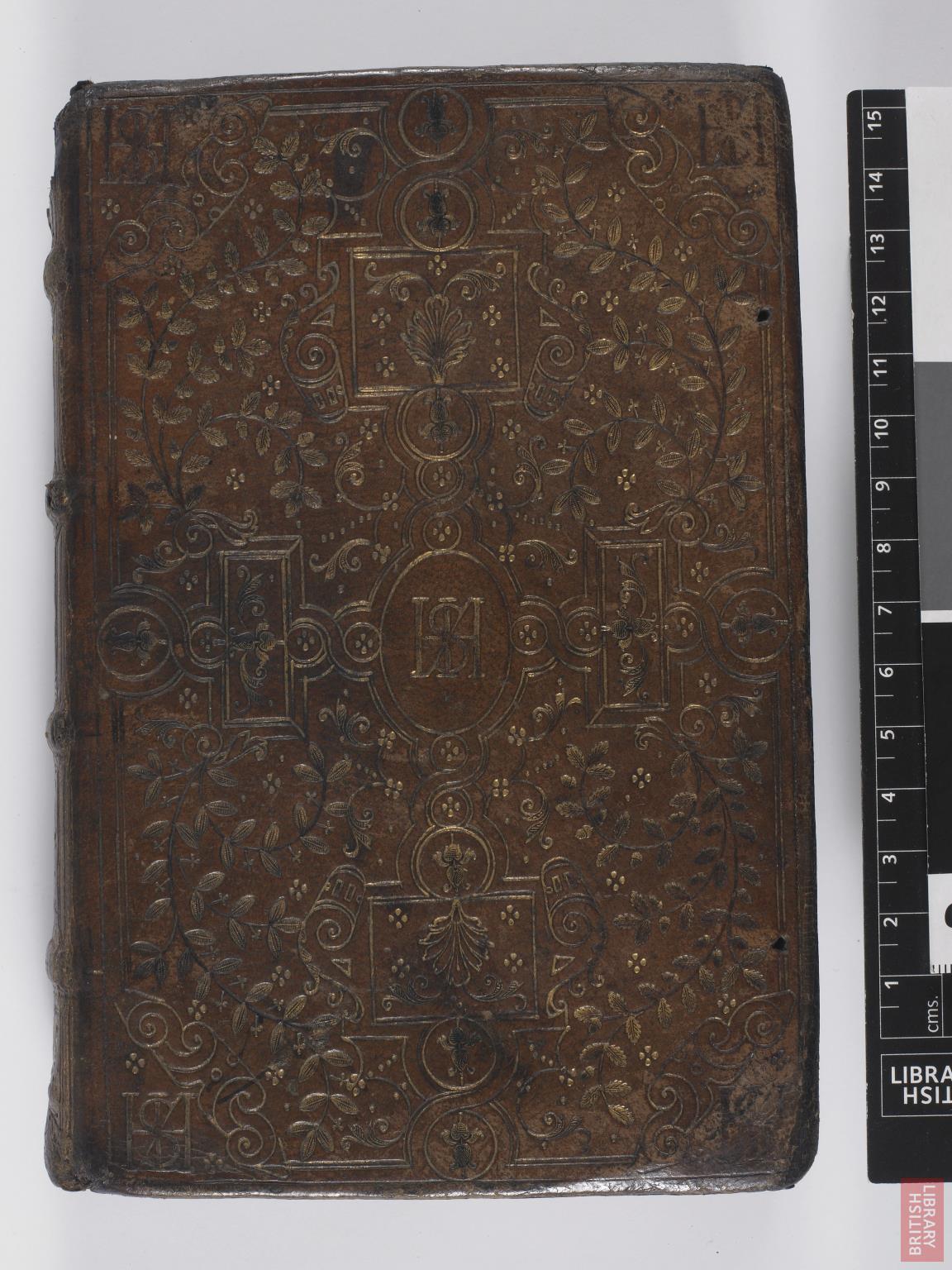 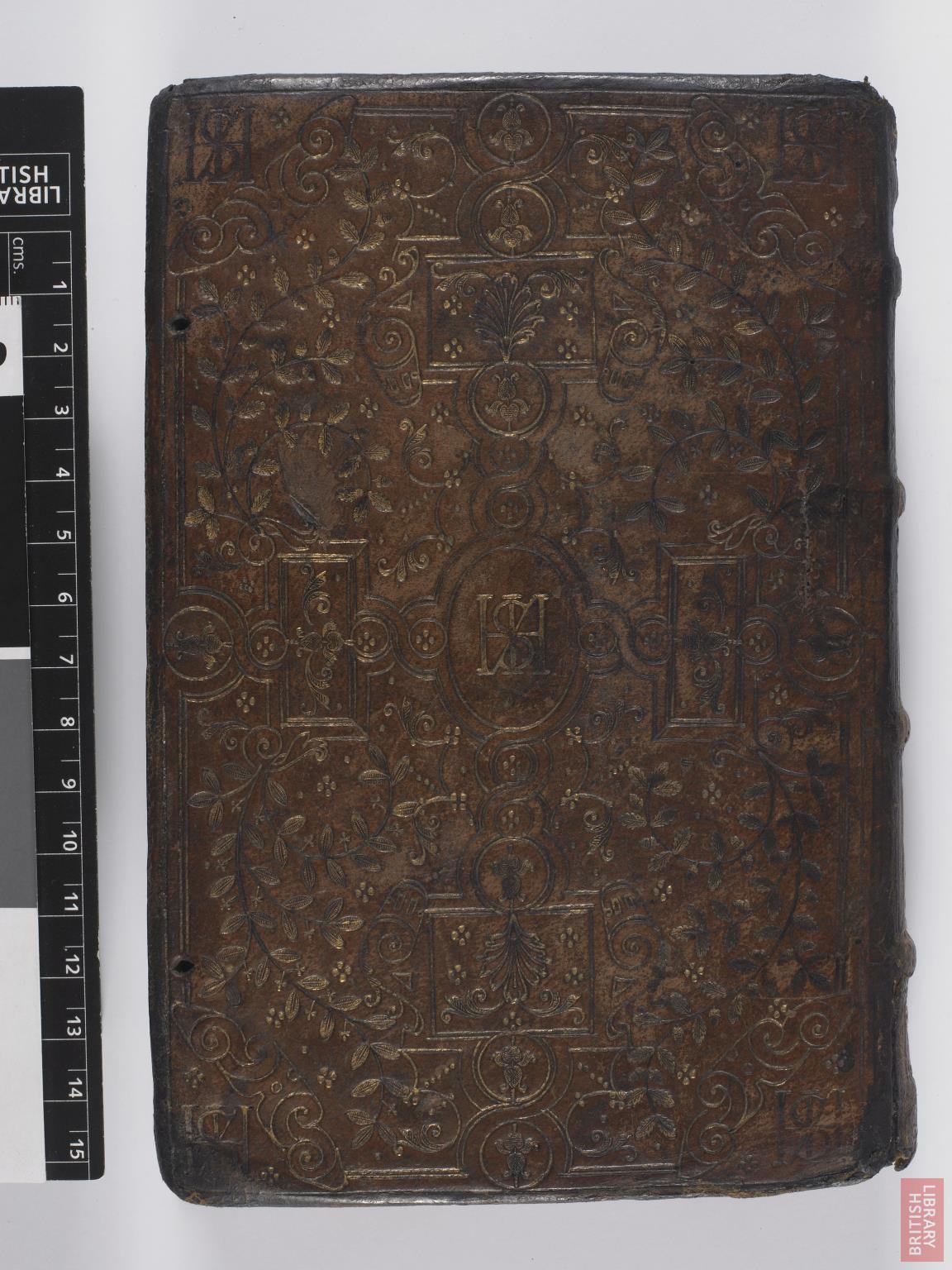 But who would have commissioned such an ornate (and costly) binding over a century after this book was produced? The answer is provided by medallions found at the centers of the upper and lower covers on our book, which contain the letters “LUCRECE” and “DU GUE” respectively. This first and last name is undoubtedly identifiable with the noted printeress Lucrèce Dugué (1544–1615), daughter of Perrette Edinthon and Jean Dugué (the French King’s organist).2 As the widow of Robert I Ballard (c. 1525–1588) and mother of Pierre I Ballard (c. 1580–1636), Dugué continued her husband’s printing firm, which had the monopoly on all forms of musical printing at the time. During the last decades of her lifetime, she continued to run the family shop located at the sign of Mount Parnassus on the Rue Saint-Jean de Beauvais, right in the heart of the Parisian book trade. It is, of course, unsurprising that such a well-connected figure would have had access to the services of a prestigious binding workshop, even for a personal devotional book. But it is likewise interesting that the owner of a firm so invested in the technology of print would opt to embellish a manuscript Book of Hours which must have appeared dated at the time. However, as we have seen with other sixteenth-century owners, the cachet of beautiful manuscripts remained strong, well into the age of moveable type!

Not wanting to judge a book exclusively by its cover, next week we’ll look more closely at some of the earlier evidence of use found within this book.