The manuscript was purchased by the University of Delaware in 2011 thanks to a gift in honor of the 50th anniversary of the University of Delaware Library Associates. Previously, the book had appeared at auction at Swann Galleries in New York (2 April 1987, No. 1432) and at Sotheby’s in London (Western Manuscripts and Miniatures, 5 December 2006, lot 45), and was subsequently offered by the Oregon-based dealer Phillip J. Pirages (Catalogue 60, 2011, cat. 444). There is also a  modern stock code on upper flyleaf 2 and a twentieth-century ownership inscription naming “Mr. Clancy” on upper flyleaf 2.

The book itself contains ten large miniatures, as well as five small inset miniatures and an historiated initial illustrating the Passion of Christ. As the Sotheby’s sale catalogue description of 2006 mentions, the miniatures are attributable to two distinct artists. The first was responsible for two miniatures only, those on folios 14v and 19r. His style is characterized by rotund, oval shaped faces with pale blue skin tones and a particular manner of creating texture by means of repeated, single-hair brushstrokes. The second, more accomplished artist was responsible for the remaining miniatures, which appear on folios 33r, 40r, 47r, 50v, 53r, 59v, 66v, and 83r. While his style could still be characterized as somewhat flat, it is more monumental that that of the first artist and betrays closer links to sophisticated Parisian models from the period (and perhaps some from Normandy as well). The borders accompanying these miniatures are also fully painted on shell gold backgrounds. Some, such as that surrounding the miniature of King David on folio 66v, consist of skillful three-dimensional floral designs. Interestingly, it is this second artist who was responsible for the five small inset miniatures and one historiated initial for the Passion According to John. These however follow the introductory miniature by the first artist, and are partially found on the same quire. Such subdivision of labor even within one of the manuscript’s gatherings is not altogether unexpected; it is yet another example of close collaboration in the production of such objects.

The style of both artists’ miniatures and of the accompanying initials suggests that the manuscript was produced in Amiens, a few generations after the great flowering of illumination in the northern French city.1 The text is for a patron in Picardy, most likely one from Noyon: the Use conforms to those in other books known to be from Noyon, and the Litany includes Saint Médard (fol. 77r), who translated his see to Noyon from Vermand in 531.

Like many books of hours, this manuscript contains information added by its early owners. The book begins with a series of early, unnumbered flyleaves, which contain a sequence of inscriptions.

MSS 95, item 31, inscription on unnumbered flyleaf i recto: “Ces heures apartiennent à Madelaine, Camuce lesquellees m’ont esté donnée, par mon père ce sixième jour d’octobre, 1615, 1615” (“These hours belong to Madeleine Camuce, the which were given to me by my father on this, the sixth day of October, 1615, 1615”)

One of these mentions a certain Madelaine Camuce. Based on subsequent subscriptions, we can conclude that is certainly Madeleine Le Camus, born around 1597 and still alive on 20 September 1667. Madeleine married a certain André Scotté, Seigneur of Velinghen, in 1616, so the book may have been a prenuptial gift from her father. Scotté was described as a “vice mayeur” (mayor), “procureur” (lawyer) and “notaire” (notary) in Boulogne-sur-Mer. The following inscription is written by Madeleine and André’s son, who had the same name as his father (André Scotté senior was dead by 1647). 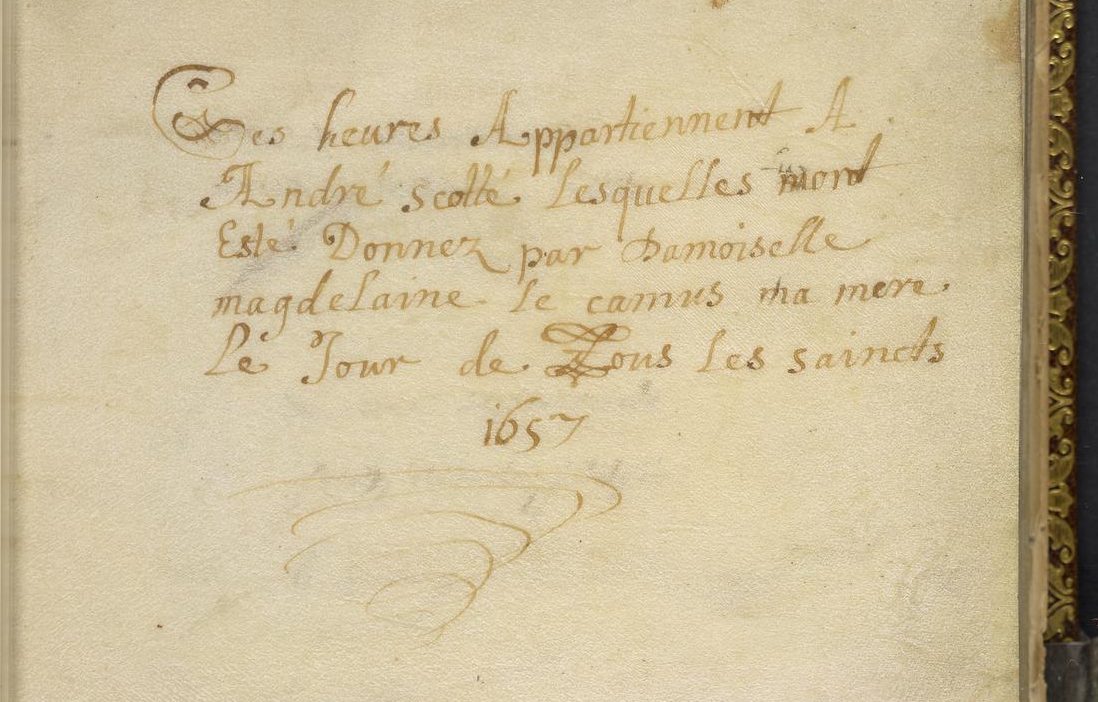 A little bit of searching reveals that this André Scotté can be identified with canon André Scotté de Velinghen, confessor and superior of the Ursulines of Boulogne, who died in 1703 (a plaque commemorating him survives in the crypt of the Basilica of Notre-Dame in Boulogne). This localization in turn renders logical the following two inscriptions, which both mention Boulogne. The first mentions a certain Jean Marie Paque, but erases this name and adds that of Jean Haude, and the second, probably made at some point in the second half of the eighteenth century (judging by the penmanship), mentions Jean Marie Paque again. 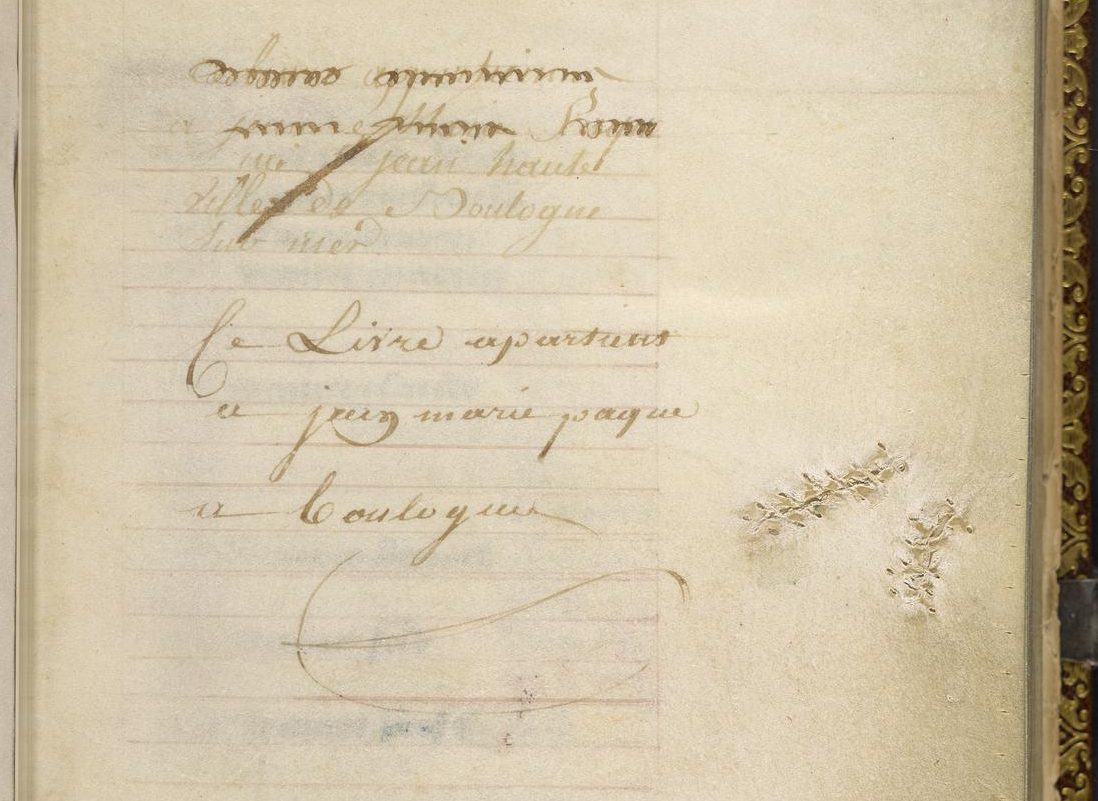 The second owner here may be identifiable with the Jean Marie Pacque born in 1748 in Echinghen, just outside of Boulogne. The cancelled portion of the inscription above might perhaps be an earlier inscription by the same owner, or indeed by a relative of the same name. The upper writing does appear somewhat older and/or more childish in style. As is often the case, it is difficult to ascertain how this manuscript made the transition from such well-documented private ownership to the commercial book trade, though its presence in the Channel town of Boulogne would have made its transfer to England and its burgeoning book trade rather easy. Curiously, the book was rebound by the Geneva-based Hans Asper in the nineteenth century.

In any case, it is not the seventeenth- and eighteenth-century inscriptions which are of most interest to us historians of the Middle Ages and early modern period, but rather that first, beautifully refined inscription found on the recto of the first unnumbered flyleaf, which may well be the handiwork of the original owner. It consists of a quatrain written in a bâtarde script that should be dated to the turn of the sixteenth century. The elaborate first initial J and the fanciful ascenders and descenders, known as cadeaux or cadelles in contemporary French nomenclature, betray the hand of a well-trained individual, perhaps with a professional clerical background. The verses, partially in a first person voice, tell the reader that the book belongs to Jeanne, daughter of Jean Cinot, and begs that they not steal the book, as without it Jeanne cannot say her prayers. Jean-Luc Deuffic has tentatively linked this Jean Cinot to a person of the same name who conducted a real estate transaction in Compiègne in 1448, which would be plausible in terms of the chronology of our book and Jeanne’s script. Deuffic has also remarked upon the pleading, first-person voice of the quatrain and linked it to others of a similar vein (some of which offer wine as recompense for returning the book!). 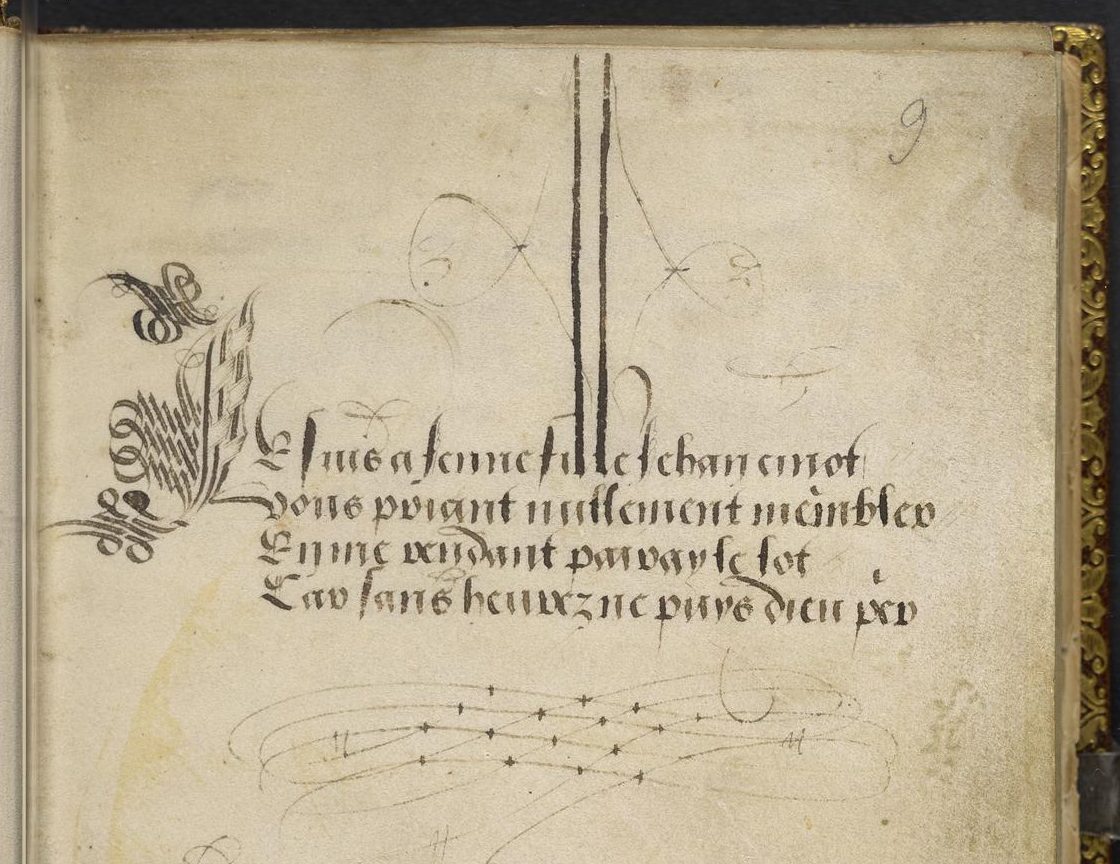 MSS 95, item 31, inscription on unnumbered flyleaf i recto: “Je suis à Jenne fille Jehan Cinot, vous priant nullement m’embler, En me rendant pairay le lot, car sans heures ne puys dieu prier” (“I belong to Jeanne, daughter of Jean Cinot, and I pray that you do not steal me; if you return me I shall pay the share, for without hours I cannot pray to God”)

This inscription, and the book’s significance for Jeanne, are discussed in a recent article by Gabrielle Parkin.2 However, not discussed until now is a rhyming couplet written lower on the page, in a smaller but similarly fine bâtarde hand. Probably inscribed at the same time and by the same person (i.e. by Jeanne), it makes a poetic case for the value of health over money. Such sentiments are strikingly à propos in our own time of pandemic and economic loss! 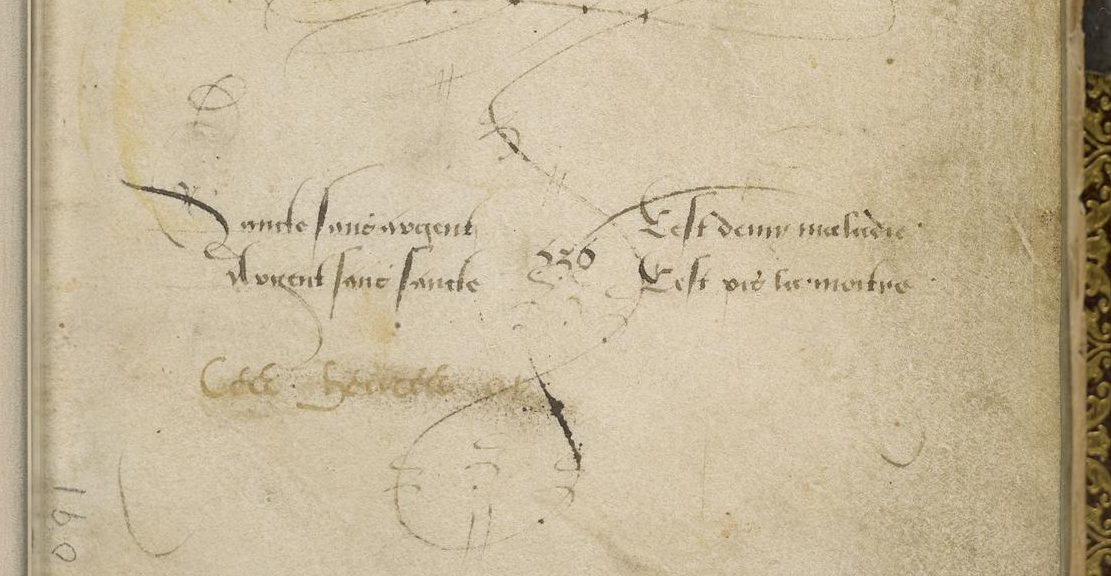