Fifty-two discoveries from the BiblioPhilly project, No. 29/52 Up to this point, many of this blog’s posts have dealt with Books of Hours, those ubiquitous devotional tools of the late Middle Ages and early Renaissance. This week, we are dealing with a type of book that is somewhat harder to classify. While it might resemble a traditional Book of Hours by means of its format, it does not contain the core text–the Hours of the Virgin–that generally defines the genre. Nor does it contain a calendar, Office of the Dead, or Gospel Lessons that we would habitually find in a straightforward horae.

This intriguing and relatively short volume of fifty-two folios, which can called a Prayer Book for lack of a better term, is a good example of a customized, one-off product commissioned to suit the devotional needs of a user who might have already owned a full Book of Hours, or required something more portable. The first four texts contain six-line, abridged versions of the prayers found in the Hours of the Virgin (fols. 1r, 2r, 3r, and 4r), perhaps a kind of aide mémoire to the longer Offices. These are introduced by non-chronological miniatures of the Presentation in the Temple, Annunciation (shown above), Assumption, and Birth of the Virgin. Lewis E 207, fol. 1r (miniature of the Presentation in the Temple) The four radiant but somewhat child-like miniatures reflect, at some remove, the soft style championed by Leonardo da Vinci’s followers Marco d’Oggiono and Bernardino Luini in the region surrounding Milan during the first two decades of the sixteenth century. To the four initial abbreviated prayers are added the Obsecro te, with an inhabited initial of the Virgin and Child (fol. 5r), the Missus est and Te deprecor prayers, and finally the Seven Penitential Psalms together with the Litany and other accompanying prayers (fols. 21r–51r), also introduced with an inhabited initial. 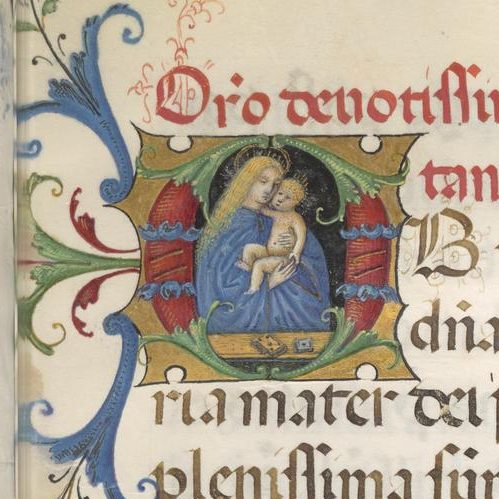 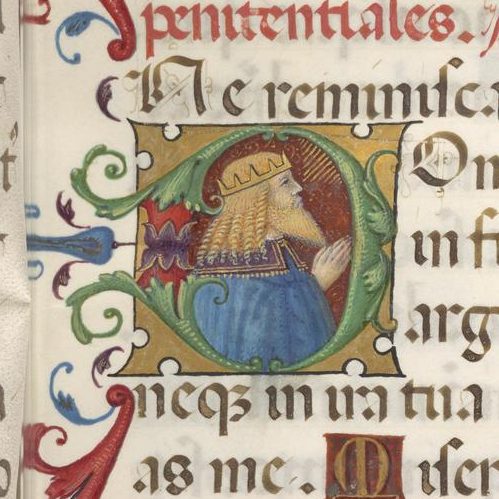 The most innovative aspect of the book, however, is found in the illusionistically painted sprigs of violas, carnations, and other flowers surrounding the four miniatures, painted so as to appear threaded through cuts in the parchment. This clever visual device is much more closely associated with Netherlandish manuscript illumination, particularly work from the so-called Ghent-Bruges school.1

The unusual style of the miniatures and the idiosyncratic texts make it difficult to place the book chronologically. However, a clue might lie in the litany, which includes saints more typical of France, including Denis, Eustache, and Lubin, which might indicate that the book was produced in Milan during the period of French domination, from 1500 to 1512. Such a date would accord well with the style of the miniatures, and provides us with at least some means for anchoring this mysterious book in its original context.