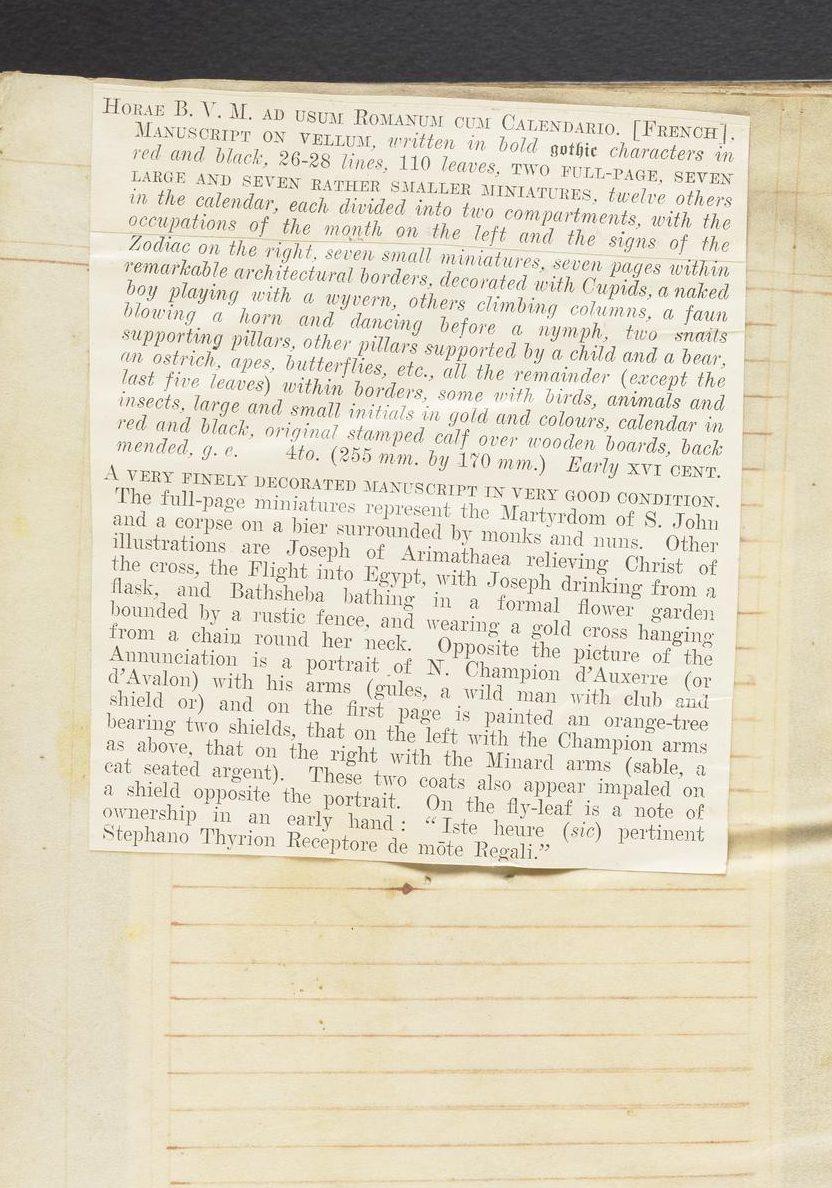 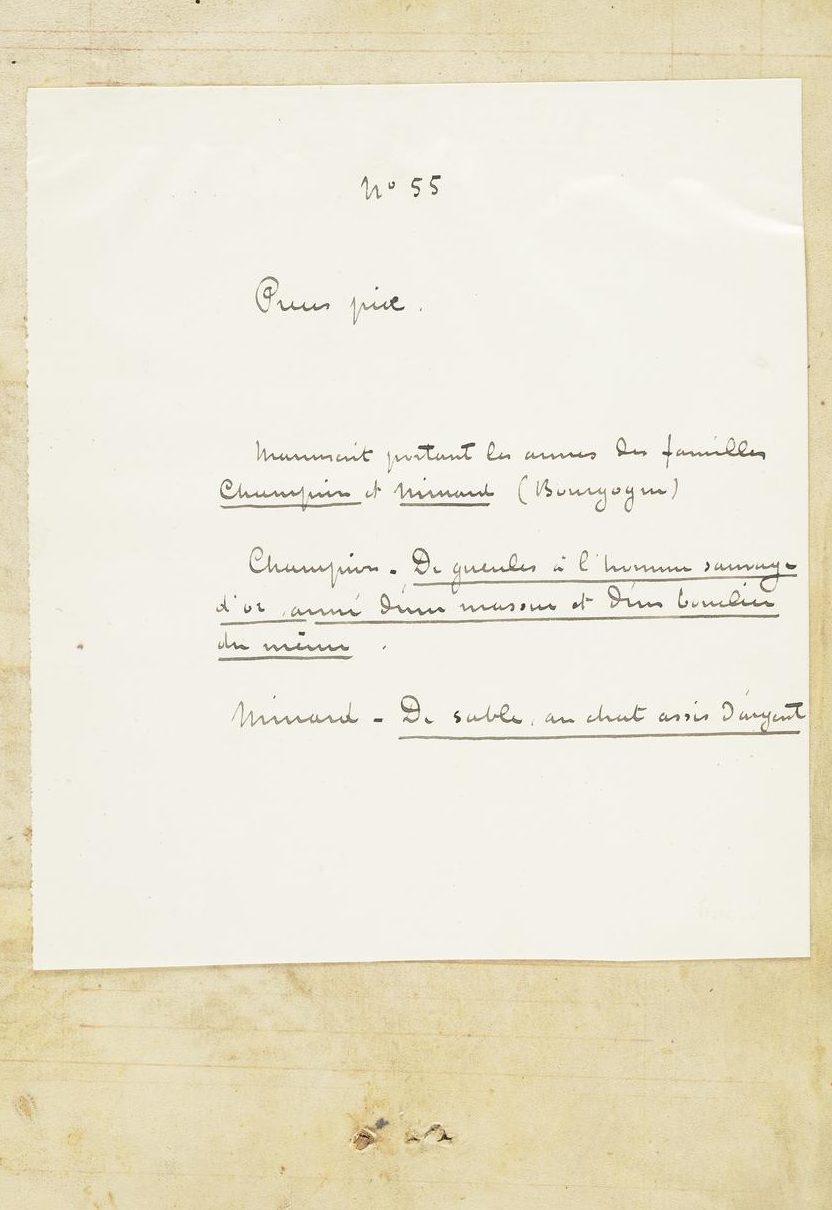 When the book was described in the auction catalogue of the Étienne Mallet collection (Sotheby’s, London, May 4-5, 1926, lot 55; catalog clipping on folio 1r), and around the same time on the lower pastedown, it was noted that it displayed the arms of a certain “N. Champion d’Auxerre” or “d’Avalon,” and of “Minard,” the latter interpretation probably based on a seventeenth- or eighteenth-century inscription found on folio 3r. 1945‑65‑14, fols. 3r and 12r (with coats-of-arms erroneously identified as “Champion,” gules, a warrior carnation/or armed with a club and a shield; and “Mignard,” sable a cat sejant argent)

This suspect ownership information was repeated when the book was gifted to the PMA as part of the Philip S. Collins Collection,1 and again shortly thereafter in the supplement to the de Ricci census.2 Also noted in the 1926 auction and subsequently repeated was the presence of a finely written Latin inscription of a certain Stephano Thyrion on folio 2r, thought to be that of a later owner (“Iste heure pertinent Stephano Thyrion Receptore de monte regali”). 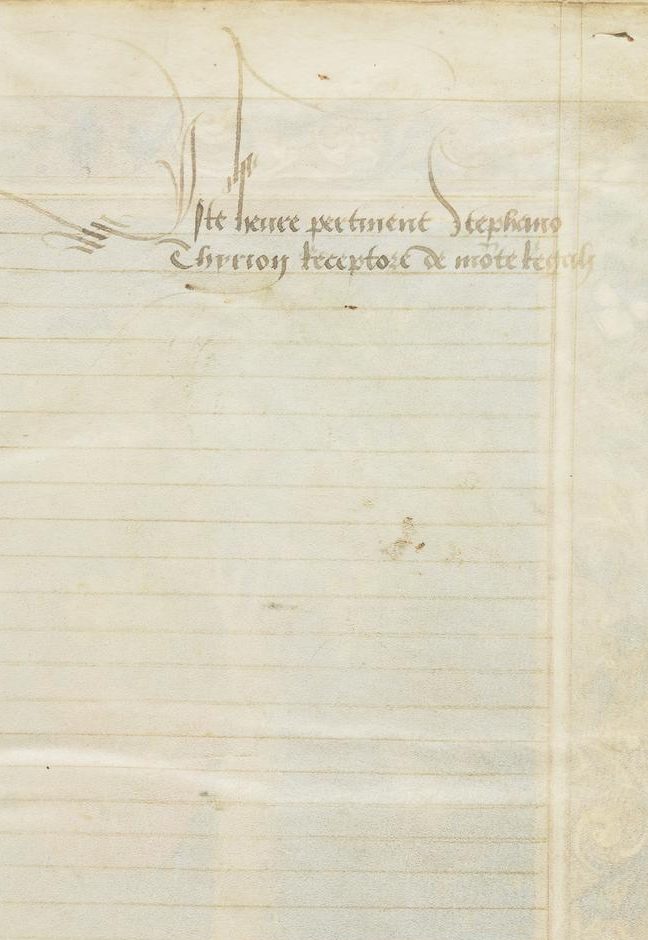 Curious about the identity of this “Stephano Thyrion,” and not able to find any Champion or Minard heraldry comparable to that found in the book in any of the regular reference sources, I began to delve further into his name, which seemed to be a Latinization of the French Étienne Thirion. Indeed, some searching through La noblesse aux états de Bourgogne de 1350 à 1789, a nineteenth-century dictionary of Burgundian nobility (for the book’s miniatures appear to have been painted in Dijon–more on that below), reveals a certain Étienne Thirion II, whose father, likewise named Étienne, was “procureur” of Montréal (Monte Regali in Latin) in 1539. A procureur was a kind of public prosecutor or receiver general that can be equated with the Latin “receptore” title found in the inscription. The historic town of Montréal is located about eighty kilometers west of Dijon, today in the Yonne department. The collegiate church in that town contains choir stalls dating from 1522, vividly carved in a style that matches the miniatures of the Book of Hours. One can imagine Étienne coming close to these, when using his book at Mass, and remarking on his own good taste.

How can we be sure that this Étienne Thirion I was the man depicted in the book, and not just the early owner who inscribed its first folio? Crucially, the entry in La noblesse aux états de Bourgogne provides the heraldry of this family: “De… à un guerrier de carnation armé d’une masse et d’un bouclier.” (“Of… [unknown background color], a warrior carnation armed with a club and a shield”). While the fields in the coats-of-arms in our book are most definitely red and the color of the warrior gold and not carnation, this description is sufficiently close, and the presence of a warrior with a club and shield sufficiently unusual, to be able to identify the original owner of the book definitively as Étienne Thirion I, depicted kneeling in prayer with a book in the handsome miniature on folio 25v. Thirion’s coat-of-arms is depicted no less than three times in the manuscript: alone accompanying his portrait on folio 25v, hanging from a tree alongside that of his wife on the armorial frontispiece on folio 3r, and impaled with those of his wife on folio 12r. His wife’s identity remains a mystery, but her heraldry (sable a cat sejant argent) does not seem to be that of the Minard family as earlier descriptions of the manuscript had indicated. Perhaps a ailurophile heraldist will be able to find the answer.

As we already mentioned, the style of the manuscript’s decoration suggests that it was produced in Burgundy, likely Dijon, where in the early sixteenth century a rather scruffy, busy painterly style predominated.3 The presence on folio 3v of an almanac for twenty years beginning in 1518 confirms a date of production on or shortly before that year. While the style of the book’s decoration and miniatures is somewhat rough, the overall effect is not without interest. The fanciful all’antica-style architectural frames are rendered in a thin wash of gold, with definition provided by highlights of reddish orange. Most eye-catching are the full-page miniatures of the Martyrdom of Saint John the Evangelist, the composition of which is based on Albrecht Dürer’s Apocalypse woodcut print from 1496–97, and the Office of the Dead, which shows a group of Franciscan (?) monks and nuns and a man and woman mourning a naked dead body laid on a table. The artist at work in the Book of Hours seems to be identifiable with the anonymous illuminator who decorated the Hours of Bénigne Serre (1482–1552), dated to 1524 and now in a private collection in Switzerland but fully digitized thanks to the work of the e-Codices project.4 Serre was the son of a Dijon merchant, and was from a similar background as Thirion, having risen through the ranks of local administration to obtain a barony and a seigneury around the time he commissioned his Book of Hours. Though the PMA manuscript is considerably larger and less richly illuminated, the two Books of Hours share some remarkable similarities. Compare, for example, the playful putti and bas-de-page vignettes in both books’ Annunciation pages, or the climbing putti and spiral columns likewise shared across both manuscripts. Thus, in addition to being a convenient resting-place for Thirion’s eyeglasses (we suspect), this Book of Hours also serves as a precious new element in our understanding of sixteenth-century book illumination in the Burgundian capital.5 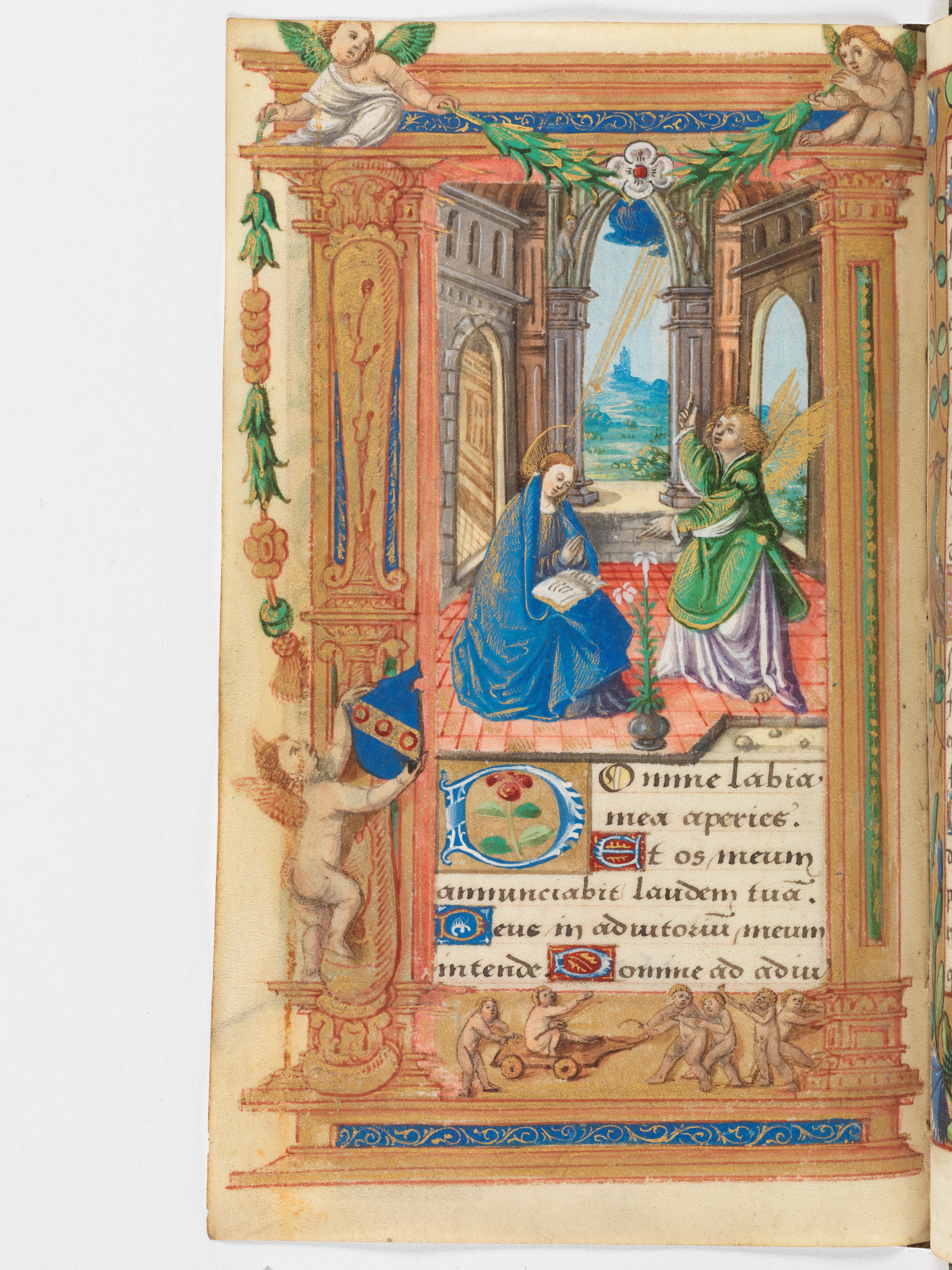 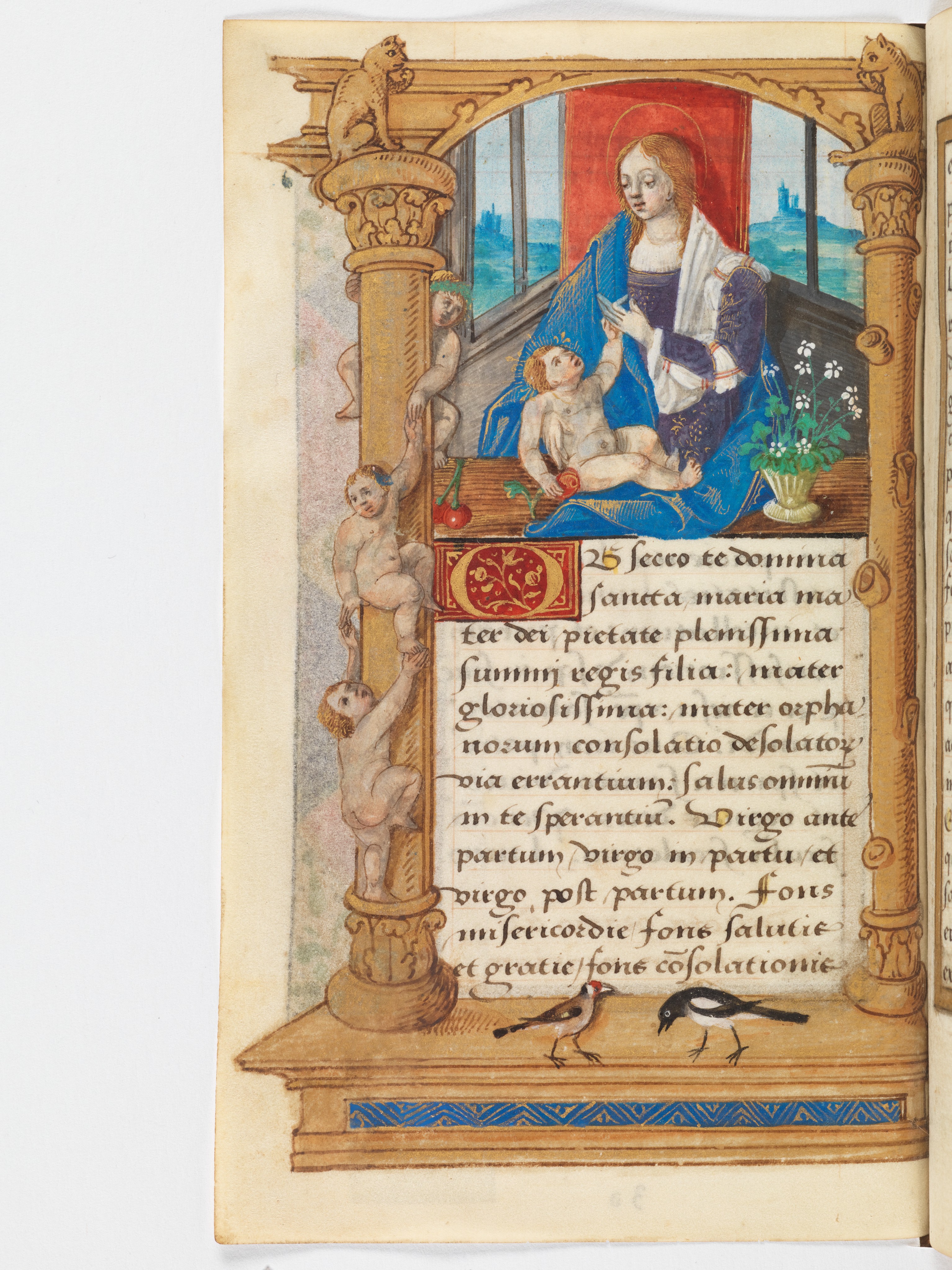