The first manuscript, a copy of of Ambrose of Milan’s Hexameron, includes a lovely colophon which tells us the name of the scribe, his affiliation to the monastery, and the date. 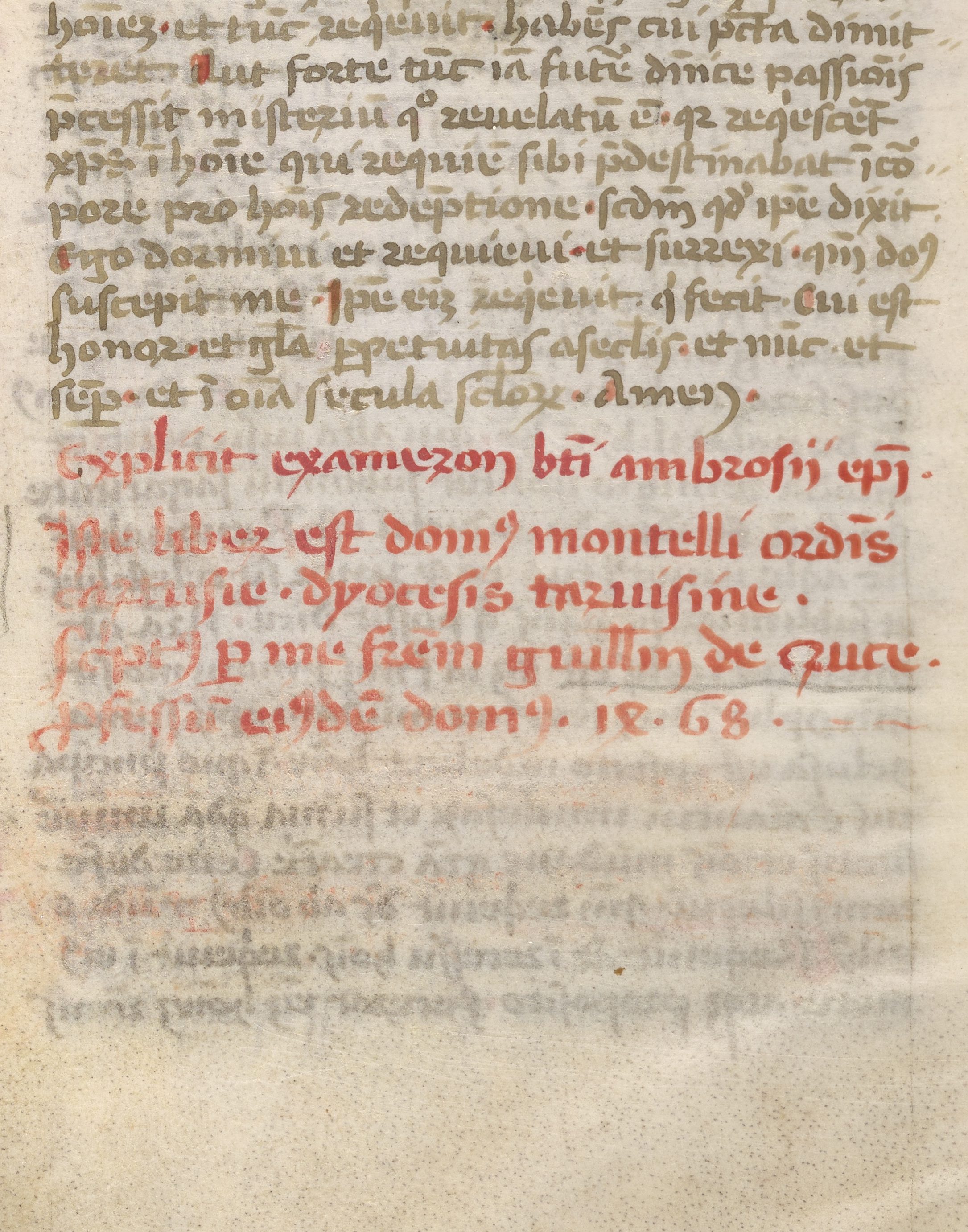 The colophon, written in red, reads:

(“Here ends the Hexameron of the Blessed bishop Ambrose. This book belongs to the Carthusian house of Montello, in the diocesis of Treviso. Written by me brother William of the Cross, professed of that house. 1468.”)

Though William of the Cross is a fairly generic name by fifteenth-century European standards, the institution and date give us a starting point for determining the identity of the scribe/monk. Those who had the talent and training to write a book in a professional hand usually did not do so only once, which leads us to search the immensely useful, six-volume Colophons de manuscrits occidentaux des origines au XVIe siècle.1 There, Lewis E 4 is listed under Guillermus de Cruce, together with a second manuscript: Oxford, Bodleian Library MS Canon. Misc. 290, a book of old and new statutes of the Carthusian order, written and signed by our scribe in 1461, who in that instance furthermore mentions that he is “Picardigenam” or from Picardy in Northern France.2 Searching further within the Colophons de manuscrits, we also find a certain “G. de Cruce” who is reported to have signed a manuscript now at the Herzog August Bibliothek in Wolfenbüttel (cat. no. 4538) in a nearly identical manner, and in the same year!3 A bit more searching reveals that this third manuscript is better known by its shelf mark, Cod. Guelf. 233 Gud. lat. Though the manuscript has not been digitized, the HAB online catalogue record provides us with good additional information.

More searching online for the Italian variant of Guillermus de Cruce, Guglielmo della Croce, brings up an intriguing footnote in a study of the history of the library at the great charterhouse of Pavia written by Luciano Gargan.4 The text points us towards a manuscript compilation of various early-modern Carthusian library inventories compiled between 1598 and 1603, which includes a section on the books at Montello. Luckily, this compilation, now at the Bibliotheca Apostolica Vaticana (MS Vat. lat. 11276), has had its microfilm copy digitized, and by delving into it we can locate, among the many printed books listed, a number of manuscripts. Among these, on folio 474r, between a book published in 1588 and another from 1575 is a volume described as “Exameron D. Ambrosii, manuscriptus antiquus.” This is clearly identifiable as the copy of Ambrose of Milan’s Hexameron today at the Free Library of Philadelphia.

The text by Gargan also mentions an earlier review article regarding the monastery which listed four more manuscripts once found among its shelves. Additionally, the author also mentions, in passing, the miscellany of moral and didactic writings including Robert Holcto’s Moralitates now at Lehigh University, which apparently hails from Montello as well.5

The Lehigh manuscript, illustrated alongside the Hexameron at the top of the post, is associated with cataloguing information that mentions its provenance from the Carthusian monastery. However, as it was written in the thirteenth century, it predates the foundation of Montello and does not seem to have any internal evidence (i.e. later inscriptions) that would serve to confirm its provenance. The relevant entry in the original De Ricci Census of manuscripts in North America relays the Montello provenance,6 but the earlier catalogue record from the sale of the library of David King of Newport, Rhode Island (New York, 12 May 1884, II, lot 2344), shortly after which Lehigh University acquired the item, does not. Perhaps Seymour de Ricci was aware of a now-lost piece of evidence, had been able to read one of the thoroughly effaced inscriptions, or was able to localize the fourteenth-century table of contents written onto one of the book’s upper flyleaves (illustrated below) to the charterhouse of Montello. A thorough check of the Vatican inventory of Montello’s books, however, seems to bring up nothing that could plausibly be identified with the Lehigh manuscript. Perhaps more evidence or an overlooked detail will help confirm this piece of provenance. For now, however, the apparent long-forgotten affinity of these two manuscripts must remain merely speculative.