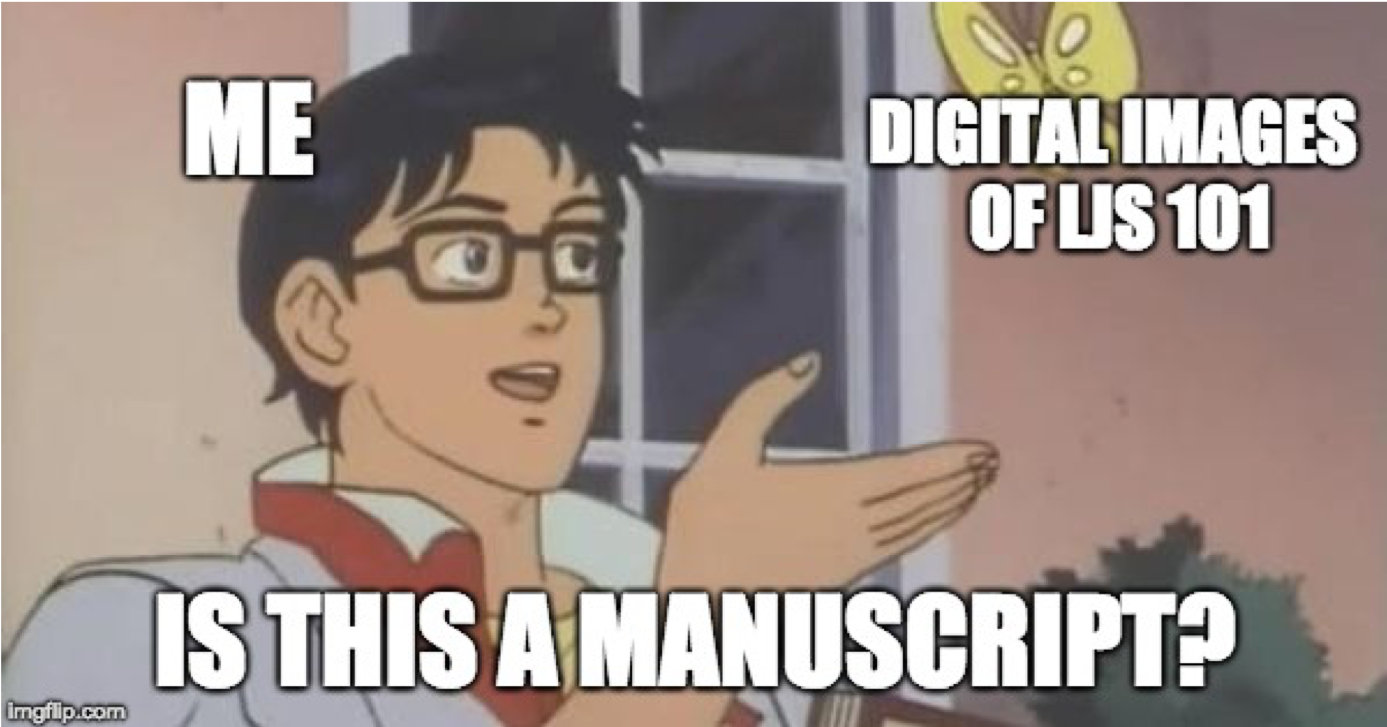 A discussion of analogies for thinking about digitized medieval manuscripts, presented by BiblioPhilly co-principal investigator Dot Porter at the University of Kansas Digital Humanities Seminar, September 17, 2018.

In this talk, which presents research and  concepts in the embryonic stage, Porter asks “If a digitized manuscript isn’t a manuscript, how can we present it in ways that explore aspects of the original’s manuscript-ness, ethically and with care, while both pushing and respecting the boundaries of technology?” Although this practice of thinking about what it means to digitize a manuscript and what that becomes seems really philosophical, Porter continues, she contends that this is really a practical question. She presents the concept of the Uncanny Valley, from robotics, in which the more human and lifelike a robot appears, the better received it is — until it becomes too lifelike, and even creepy. This is the territory of the Uncanny Valley, and the way this might inform thinking about digitized manuscripts.

Genealogical rolls showing the direct descent of English kings from Adam were a major (and blatant) propaganda tool during the Wars of the Roses in later fifteenth-century England. The BiblioPhilly libraries have three from the reign of Edward IV, each very fine — but this one from Lehigh University has an intriguing nineteenth-century housing that makes it especially remarkable.

The Lehigh roll is based on the text of a roll that Roger of St. Albans presented to Henry VI, with continuation into the reign of Edward IV. The survival of considerable numbers of the these rolls suggests, as Alison Allan notes, that “they were the work of a small group of craftsmen,”[1] and that their production was deliberately planned to support the usurpation of the young Yorkist king. They showcase his purportedly superior hereditary claim and hint that his accession was divinely foreordained.

The glass-fronted wood housing with rollers and external knobs for this particular roll is an artifact in and of itself, and the question of how to photograph the roll without destroying its  enclosure has been the subject of a great deal of discussion. If removal of the roll from the case is impossible, as seems increasingly likely, the imaging team will explore photographing portions of the roll and digitally stitching it together.

In the meantime, enjoy this video of principal investigator Lois Fischer Black carefully turning the handles to get a full view of the roll.

Roger of St. Albans. Geneaological Roll, in Latin. 15th-century manuscript on a vellum roll 20 feet 5 inches x 12 inches (612.8 x 30 cm.), written in England. Bears the 16th-century inscription “liber Robert Ohlund (?) de Stondlley (?).” Acquired by Lehigh in 1955, the gift of Mr. Robert B. Honeyman, Jr. Chronicle from the time of Adam to the reign of Edward IV.  A high-resolution digitization of this image will be prepared as part of the Bibliotheca Philadelphiensis project.
[1] Alison Allan, “Yorkist propaganda: Pedigree, prophecy and the ‘British History’ in the Reign of Edward IV.” C. D. Ross, ed., Patronage, Pedigree and Power in Later Medieval England, Alan Sutton, Rowman & Littlefield, 1979.

Not all medieval manuscripts are all about the pretty pictures and salvation (or not). This one is about the body.

This manuscript of Bernard de Gordon’s Lilium medicinae (Historical Medical Library of The College of Physicians, 10a 249) is one of a number of manuscript editions of a comprehensive and practical manual for medical practitioners. The work is divided into seven sections that address the body from head to foot. Each section includes definition, causes, diagnosis, prognosis, treatment, and clarification.

Lilium medicinae survives in a number of copies, including its original Latin and a number of translations including English, a testament to its popularity, especially in England. The College’s copy was made in 1348 and completed at the feast of Corpus Christi (June 20) — almost exactly when the Black Death landed in Melcombe in the county of Dorset.

Chrissie Perella, Archivist at the College of Physicians, translated a 1551 Latin version of Lilium medicinae on the causes of pestilence in her “Medieval Monday” series of blog entries: “Pestilential fevers are those that arrive in the time when crops are destroyed and all is barren because of corrupted air and water. . .The signs of which are common, and some belong to fever.  Signs of a future pestilence appear as stars called comets, with a round tail and a meteor, and the way in which it [the weather] is hot and then cold, and then hot and then cold again, many times in one day….” Read more here: Pestilential Fevers, or, The Black Death

CLIR Postdoctoral Fellow Erin Connelly, who reviewed and expanded the cataloging data for Lilium medicinae for the BiblioPhilly project, has a personal interest in the work: her dissertation at the University of Nottingham focused on a manuscript of a fifteenth-century Middle English translation, The Lylye of Medicynes (Oxford Bodleian Library MS Ashmole 1505). In addition to working on an edition of the manuscript, she has mined it for a project called Ancientbiotics that seeks to find new remedies in old sources that can be used when antibiotics have failed.

In two guest posts at the University of Nottingham, Connelly noted the income inequality that might determine whether the patient lived or died (‘ȝif it be a pore man . . .’: Healthcare for the Rich and Poor in the Lylye of Medicynes),  an issue that  still resonates today; and the medieval belief in the curative properties of breast milk (‘þe best mylke is womman milke’: Does Breast Milk Heal?) For Ancientbiotics, she is examining a database of ingredients and ailments from the Lylye of Medicynes for recurring patterns that might aid in the development of new remedies for antibiotic-resistant infections. [Listen to an NPR interview with Connelly on Ancientbiotics]

Where the College of Physicians’ manuscript spent the first century of its life is not known, but it was sold to a John Kokkes of Oxford (d. 1475), possibly a doctor and teacher, who in turn sold it for a reduced price in exchange for medical services.

Another unsolved mystery: what happened to the scribe? Perella wonders whether he survived the Black Death. And so do we…

View the manuscript online at http://openn.library.upenn.edu/Data/0027/html/cpp_10a_249.html

In case you missed it: earlier this summer, the video team at the University of Pennsylvania followed a manuscript from the Free Library of Philadelphia through the imaging process at the Schoenberg Center for Electronic Text & Image at the Penn Libraries. The Free Library holds the majority of the manuscripts being digitized by the project, and imaging for these is largely complete. Over the next several months, these images will be uploaded to OPenn and freely available to anyone.

Read the article on Penn Today and watch the video here: https://penntoday.upenn.edu/news/penn-brings-philadelphias-rare-manuscripts-world

Although the manuscript featured here, Free Library of Philadelphia MS Lewis E 160, is still being prepared for uploading, it will be available in a few weeks. Meanwhile, you can view the images already mounted at this link: http://openn.library.upenn.edu/html/bibliophilly_contents.html

This is a “very evil fox,” according to Les regnars traversant les perilleuses voyes des folles fiances du monde, a Middle French poem by Jean Bouchet. Monsieur Reynard had done all the bad things, and now he is paying for it in the very hot place. The manuscript is part of the collection of the Rosenbach of the Free Library.

Bouchet’s text and the nine accompanying miniatures have been digitized and are available online as part of the Bibliotheca Philadelphiensis project funded by the Council on Library and Information Resources. The text and images employ the fox as a metaphor for the vices of contemporary man. They denounce all estates of society: the king, the nobility, the clergy, the merchant class, and the common people. The fox and his friends cavort through the poem polluting a badger’s lair, carrying a flaming torch, dressed as clergymen carrying rosaries, knocking down a church, and dressed as noblemen.

Eventually our fox dies and his soul lands in a cauldron of boiling water, “regretting the hour and day he was born.”

Bouchet was a law clerk and rhetorician from Poitiers, France, but this manuscript copy of his text was produced for Philip the Handsome, archduke of Austria, while he was duke of Burgundy and count of Charolais.

A slightly different version of this text was published, with woodcuts, by the Parisian publisher Antoine Vérard in late 1503 or early 1504. The copy in the Rosenbach survives as the only illuminated manuscript of the text.

You can browse the pages of this manuscript here: http://openn.library.upenn.edu/Data/0028/html/ms_197_030.html . The “Technical Help” link on the menu bar provides  information on how to download all the images as jpegs or tiffs.

Additional images from the manuscript:

The Bibliotheca Philadelphiensis catalogers have enriched the project’s social media feeds since they began their work, tweeting the finds that surprise, delight, and excite them using the hashtag #bibliophilly. One of the most prolific of these has been Diane Biunno (@dianebiunno on Twitter). Based at the Free Library of Philadelphia, she has shared manuscripts large and small, glorious miniatures, charming marginalia, bindings, stains, repairs, and other examples of the weird and wonderful ways in which these manuscripts were created and used. She found a lot of images of skulls in those manuscripts, prompting a light-hearted #skullsmackdown competition with fellow cataloger Erin Connelly. (Diane won.)