I first encountered this manuscript during an initial visit to Lehigh’s Linderman Library in September of 2016. The refined style of the introductory miniature jumped out at me immediately. The pairs of escutcheon-bearing putti, crouching leopards, cowering fawns, and athletic satyrs all pointed to a work of some refinement. The pastel-toned aedicula, dangling male and female cameos, and figurative tympanum bearing a depiction of Orpheus showed that this was a work steeped in the so-called all’antica style, that selective revival of ancient forms so characteristic of humanist book production in Renaissance Italy. What is more, the illusionistic torn parchment effect applied to the text block, which is carefully shaded by the artist to suggest a ragged piece of parchment hanging from a classicizing structure, is something of a scholarly preoccupation of mine.1 We were clearly dealing with a work by a highly skilled Venetian or Paduan artist working in the ambit of Benedetto Bordone, the most prolific illuminator of such documents at the turn of the sixteenth century. And yet Bordone’s palette is generally much more garish in tone, with a thicker application of pigment. Perhaps this was the work of an artist slightly older than Bordone, closer in spirit to an earlier generation of masterful-but-anonymous Veneto-Paduan illuminators, namely the Master of the Putti, Master of the London Pliny, and Pico Master. In any case, the illustration was decidedly not “executed in a style which has been called the International Gothic,” as John C. Hirsh had stated in his valiant but not-quite-adequate guide to Lehigh’s manuscripts, written in 1970, when the state of research was far less advanced.2

About a year and a half after first seeing the manuscript, I was heartened to find the Commissione published (along with an excellent color reproduction) in Helena Szépe’s wonderful new book, Venice Illuminated.3 There, she attributed the frontispiece to the so-called First Pisani Master, so-named on account of two Aldine editions with Pisani heraldry, now in Manchester (Virgil, Opera, 1501; John Rylands Library, Spencer 3359) and London (Juvenal and Persius, Opera, 1501; British Library, C.4.g.10).4

Szépe’s book, which provides a much-needed synthesis of these documents that are at once numerous and poorly understood, also has the merit of shedding light on another little-known gem from a Philadelphia collection: the splendid Commissionne issued in 1517 by Leonardo Loredan to Paolo Nani, podestà and captain of the inland town of Treviso. The manuscript forms part of the Lawrence J. Schoenberg Collection at the University of Pennsylvania (LJS 57), but its flashiness is somewhat at odds with the rest of the collection. Upon first seeing its colorful frontispiece several years ago, I had a hunch that it might be by Bordone himself, an opinion that Szépe has thankfully seconded.5 The manuscript’s first page consists of an elaborate frame of all’antica ornamentation composed of silver-grey vases and shell gold volutes set against a deep blue background, which encapsulates a carmine-colored text cartouche and a rectangular miniature. The central image shows Saint Paul presenting a kneeling Nani to the enthroned Virgin and Child, a simplified version of large-scale compositions by contemporary Venetian painters, notably Giovanni Bellini (c. 1430–1516) and Vincenzo Catena (c. 1480–1531). 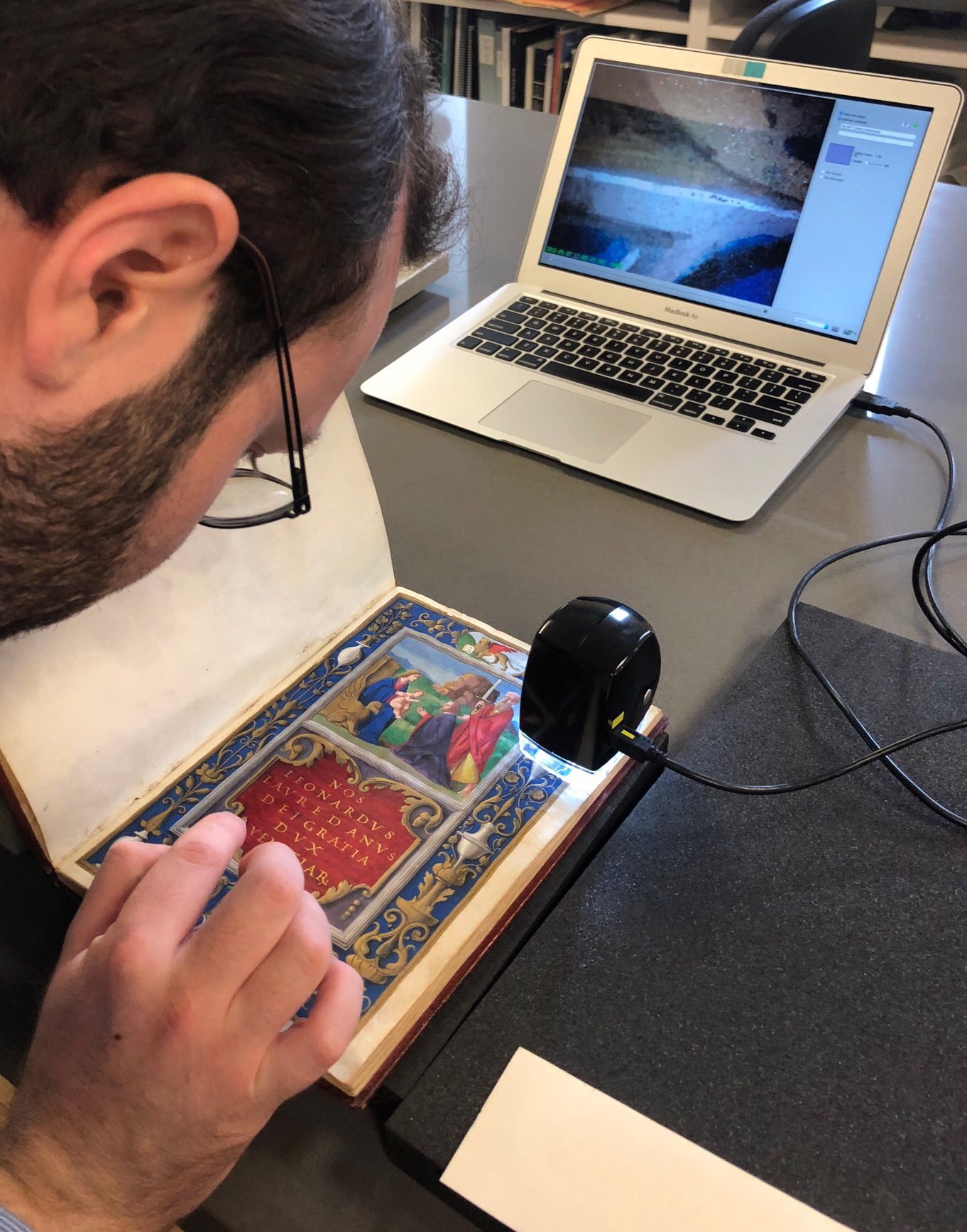 This is a manuscript I know well, as I often use it in teaching. The brilliant colors of Bordone’s frontispiece bear witness to the high quality of pigments available to artists working in Venice, the European hub for the trade of paintstuffs at the turn of the sixteenth century. The work’s more impressionistic style and thicker application of paint herald a move away from the subtle, economical approach taken by the First Pisani Master in the earlier the Valier Commissione, and show just how much artistic styles can change during the reign of a single Doge.