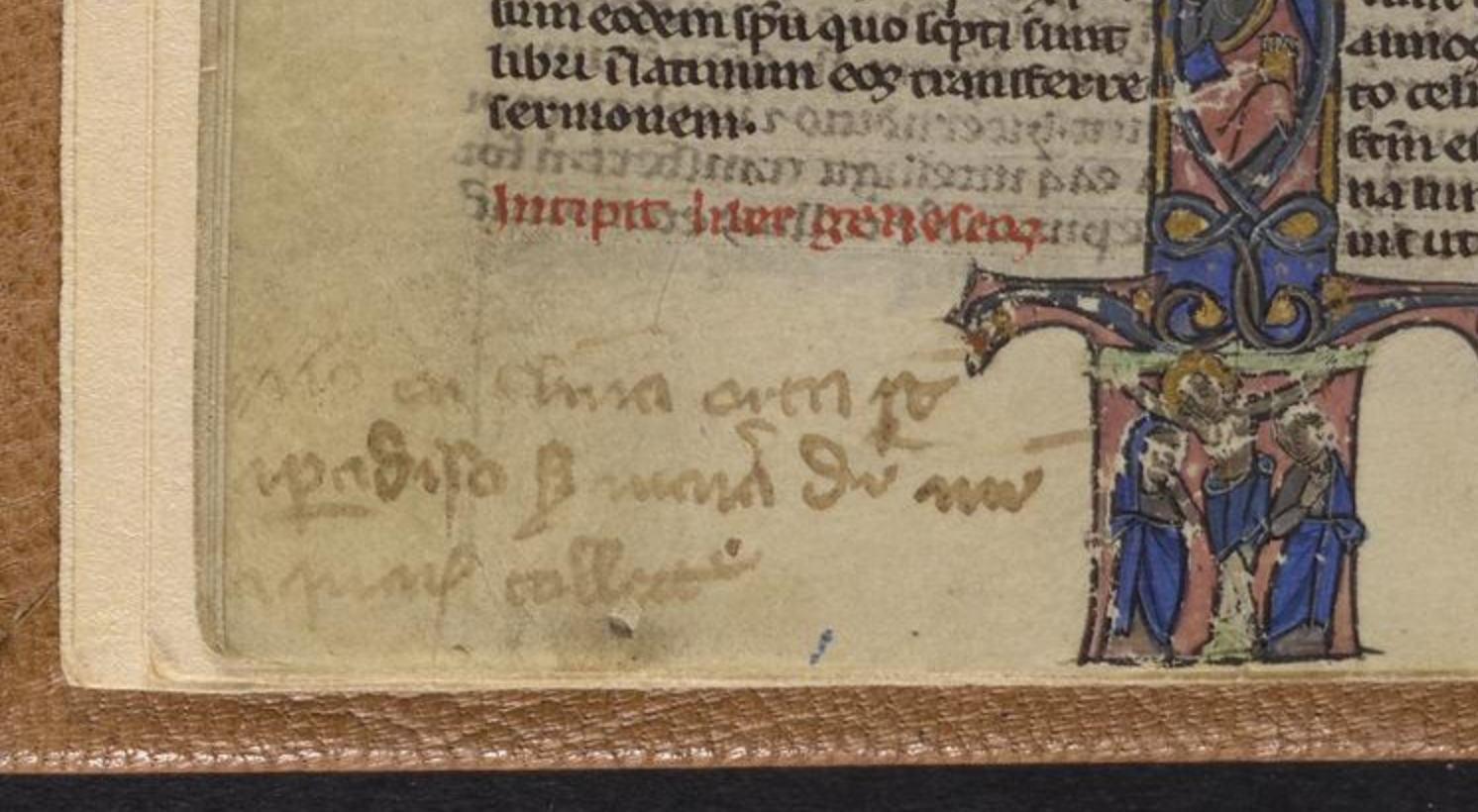 The first inscription appears in the lower left-hand corner of the page with the beginning of Genesis. It is adjacent to the Crucifixion, which is often found at the bottom of the historiated initial I for Genesis showing the seven days of Creation in thirteenth-century bibles, as in this slightly later example of a large-format Bible now at the University of Pennsylvania (Ms. Codex 724). 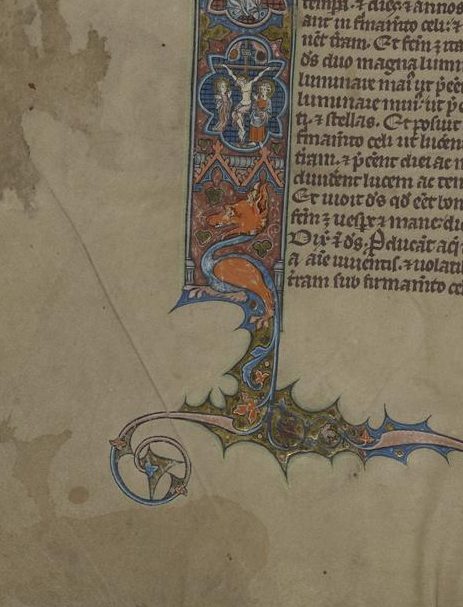 In the equivalent location in a thirteenth-century pocket Bible from the John Frederick Lewis collection at the Free Library of Philadelphia (Lewis E 28), the Crucifixion scene has been cut out. In the facing gutter, one can clearly make out the offset of the image. Was it damaged through repeated kissing and touching and therefore discarded, or was it excised to become a standalone devotional image? In the margin nearby, an early user has provided a clear annotation, unrelated to the mutilated miniature, which refers to commentary by Papias of Hierapolis. 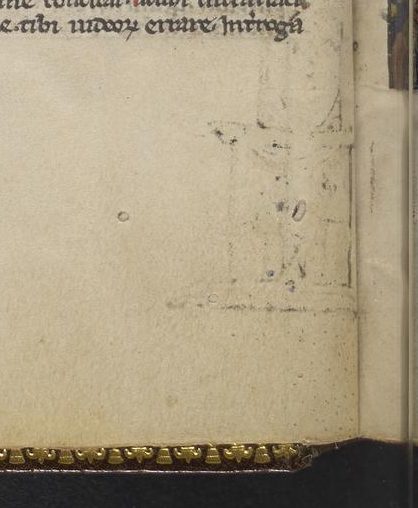 The annotations in the Swarthmore example are likewise found at the beginning of Genesis (folios 4v, 6r, 6v, and 7r), but they are less clearly legible. They all appear to be in the same hand, which can be dated to circa 1300.

I turned to colleagues for help in deciphering these passages. Sonja Drimmer of the University of Massachusetts Amherst was able to ascertain, based on the two final words (“amplius vixisse”) that the passage on folio 7r, shown below, is an abbreviated transcription from Peter of Comestor’s Historia scholastica, a popular paraphrase of the Bible that was widely read by aspiring theologians at the University of Paris and elsewhere.3 The text’s popularity peaked in the fourteenth century, around the time when the annotations were made. Here, on folio 7r, the annotator copied a section of the commentary relating to the causes of the biblical flood, essentially word-for-word.

Dominique Stutzmann, of the Institut de Recherche et d’Histoire des Textes in Paris, was able to provide further insight into the remaining marginal notes, and even partial transcriptions. Quite a feat given the highly abbreviated nature of the inscriptions, their pale ink color, and the partial trimming caused by a later rebinding! Some of the texts consist of further paraphrased arguments from Peter Comestor, while others are more obscure in origin and may reflect the scholastic training and education of the actual annotator. Those at the bottom of the facing folio (6v) contain an array of cross-references to other passages in Genesis, and a reference to the figure of Cain:

The preceding recto (fol. 6r) contains further notes in the lower margin, as well as some interlinear corrections and a trimmed note in the upper right margin of the right-hand column: 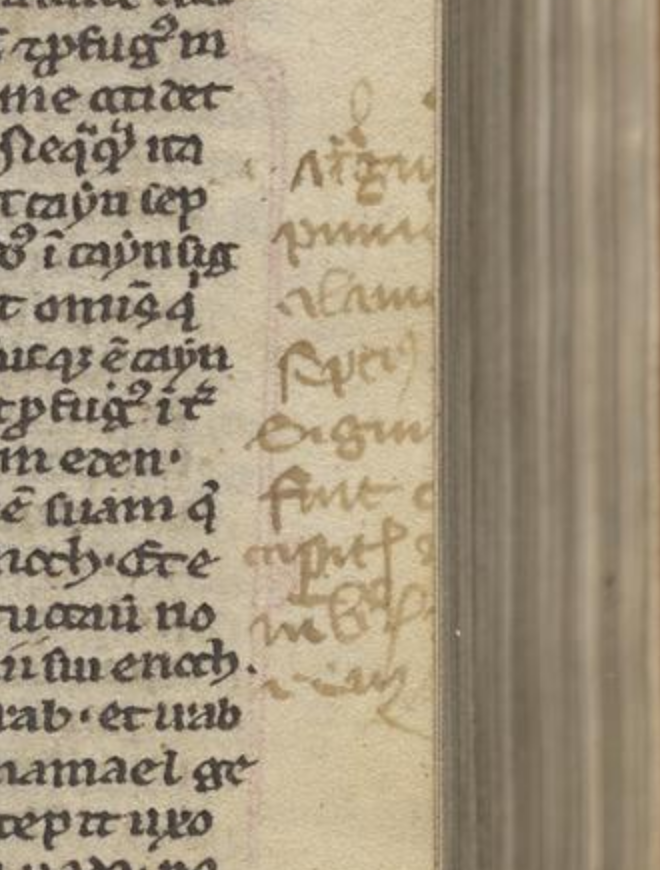 In the lower margin:

On the upper right margin, the following note glosses the Curse of Cain from the Book of Genesis: “qui occiderit Cain septuplum punietur” or “anyone who kills Cain will suffer vengeance seven times over.” (Genesis 4:15):

As Dominique pointed out to me, this truncated note likely refers to Lamech, a sixth-generation descendant of Cain (Genesis 4:18).4 Finally, we can return to the text adjacent to the Crucifixion image:

Here, the meaning is not immediately clear, but, given the notes on fol. 7r referring to the flood, this may be connected to the rivers of paradise listed in Genesis 2:10–14.

Altogether, these rapidly scribbled notes are less about the direct recopying of a scholastic authority than they are about the dialectic process of commentary. The remainder of the Bible does have occasional marginal notes, but these are mostly in a different hand and consist of simple emendations of the Vulgate text. In seeing these denser glosses clustered in the book of Genesis, one can’t help but recall the phenomenon of a student beginning the semester with alacrity and careful note-taking, only to lose steam as the term progresses!