Fifty-two discoveries from the BiblioPhilly project, No. 28/52 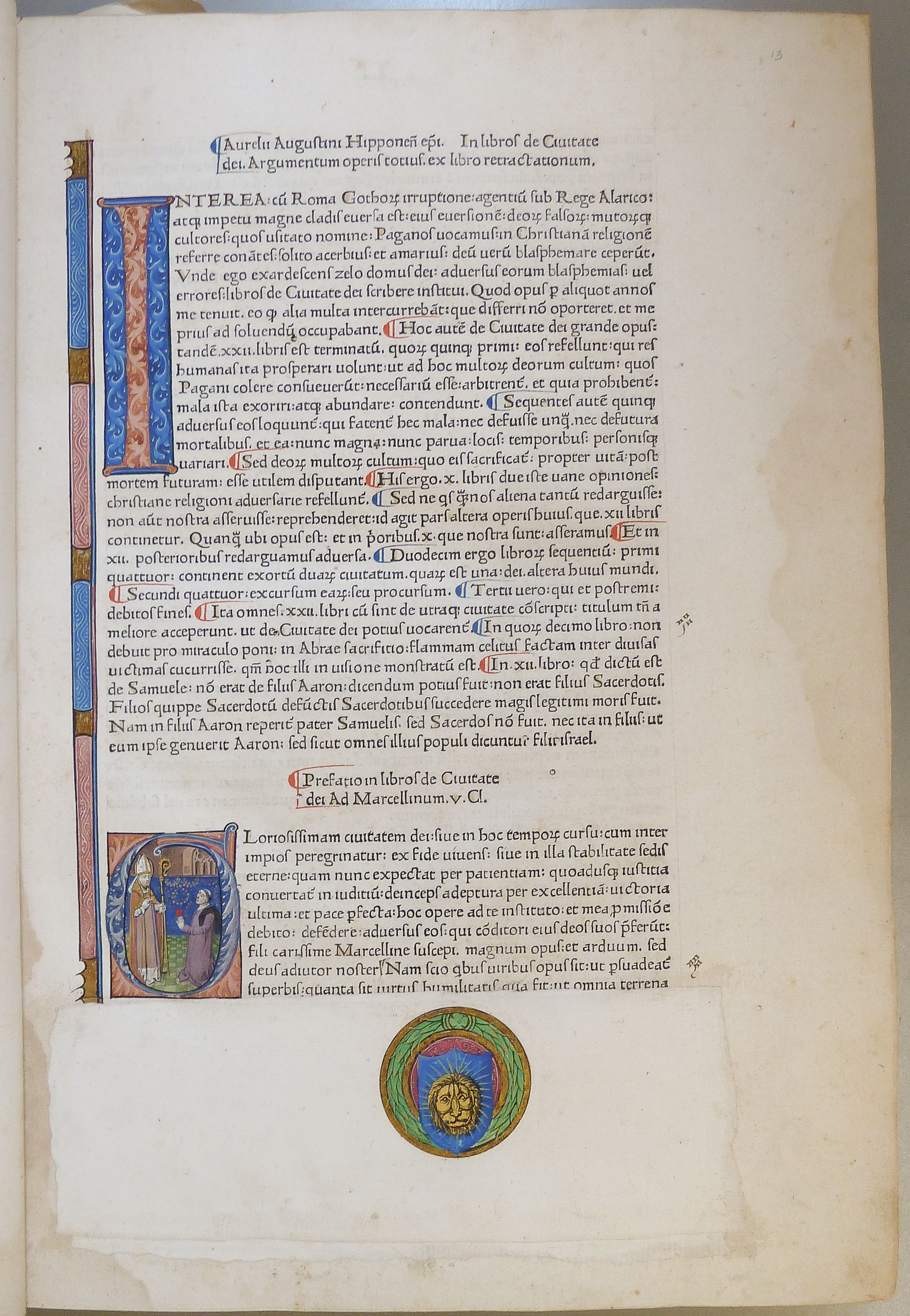 This week’s BiblioPhilly manuscript “discovery” is a bit of a misnomer on all three counts, as it A) amplifies an observation previously made by another scholar, B) relates to an item held at the University of Pennsylvania–an institution not officially included in the Bibliotheca Philadelphiensis grant–and C) concerns an early printed book, rather than a manuscript! Nevertheless, it is worth including in the blog since A) the discovery was enabled by an innovative online project, B) the item will be included in next year’s post-BiblioPhilly exhibition at Penn, and C) the incunable in question was decorated by hand with high quality initials and bar borders.

So, we are still dealing with an illuminated book, even though it is printed. Though it may seem counter-intuitive, the advent of the printing press did not diminish the demand for skilled illuminators. In fact, there was an explosion of available work, as innumerable inset spaces left for initials in printed works still had to be completed by hand. The book we are looking at today is an example of the involvement of traditional illuminators with the new technology, a phenomenon well studied by Lilian Armstrong and others. It is a copy of Saint Augustine’s City of God from 1470, the third edition of the work to be printed in Italy, by the German printers Conradus Sweynheym and Arnoldus Pannartz (a fourth had been produced by Johann Mentelin, the first printer to settle in Strasbourg, in 1468). These two business partners were the first to establish a press outside of German-speaking lands, at the Benedictine abbey of Subiaco in 1464/65. By 1467, they had moved in search of greater economic opportunities to Rome, where our volume was printed. Adapting to their trans-alpine audience, Sweynheym and Pannartz abandoned the Gothic typeface used in Northern Europe, developing a semi-Roman font at Subiaco and finally a fully Roman version upon their move to the Papal city (you can see that this is the typeface they used here). 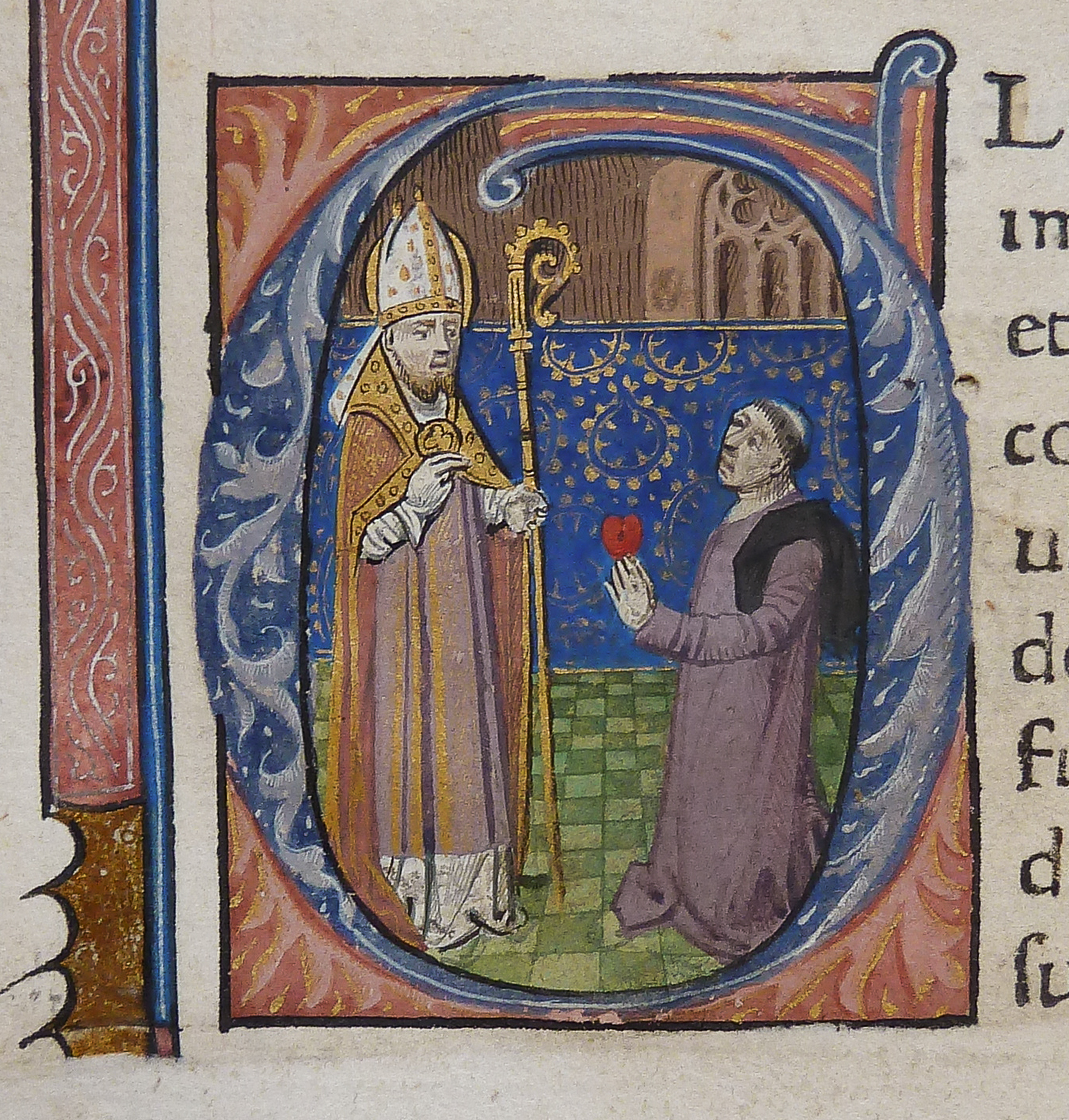 Unusually, and perhaps uniquely, this incunable’s secondary decoration was added not in Italy but in France. The bar borders and illuminated initials in deep blue and reddish-mauve are all typical of northern French illumination of the 1470s. The single historiated initial G on the first page of the prologue depicts the mitred Saint Augustine blessing the kneeling Marcellinus of Carthage, his friend and the dedicatee of the City of God, who is shown holding a heart in his hands indicative of their bond. In style, the two figures are reminiscent of miniatures produced in Paris by the workshop of François Le Barbier, a prolific artist (previously known as “Maître François”) responsible for illuminating a large number of Books of Hours and theological manuscripts in a somewhat rote style.1 Le Barbier and his associates illuminated three much more elaborate French translations of the City of God: one for the lieutenant general of Paris, Charles de Gaucourt (Paris, Bibliothèque nationale de France, MS fr. 18–19); one for the king’s secretary, Mathieu Beauvarlet (Paris, Bibliothèque Sainte-Geneviève, MS 246); and one for the recalcitrant Duke of Nemours, Jacques d’Armagnac (vol. 1: The Hague, Museum Meermanno, 10 A 11; vol. 2: Nantes, Bibliothèque municipale, Ms. 181).

In the lower margin of the prologue page, a rectangular strip of paper has been excised and replaced with a patch bearing an armorial escutcheon surrounded by a green wreath. The arms appear to show a Lion’s golden face against a blue background. This would seem to be a potentially popular choice for a coat-of-arms, but a head-on lion’s head is almost unheard of in European heraldry, and my first instinct was that this was a fictitious emblem, added to enhance the appearance or price of the book at a later date. 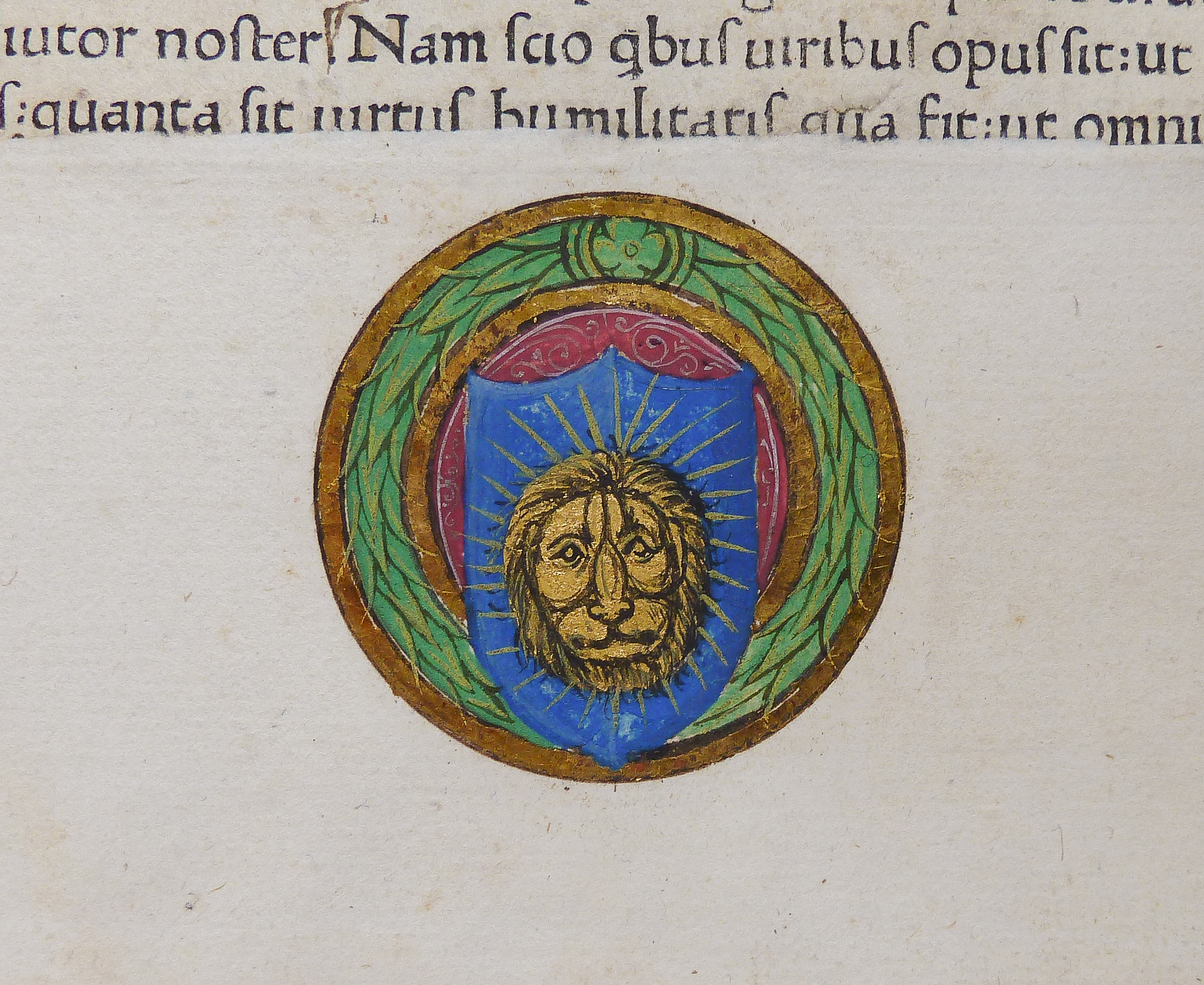 However, I noticed that the book’s heraldry had previously been discussed on the web as part of the Provenance Online Project. This is a lightweight crowdsourced initiative started at the University of Pennsylvania whereby simple, cellphone photos of unknown annotations, bookstamps, bookplates and other heraldic identifiers are shared online via Flickr, a free photo posting utility. Users around the world are then encouraged to identify the owners. Luckily, the arms in our book were identified by none other than Martin Davies, former curator of incunabula at the British Library and a leading authority on early printing.

As Davies pointed out in a reply to the POP posting, the arms display the face of a leopard, not a lion! They are, in heraldic terms: azure, a leopard’s face or (in French: d’azur à la tête de léopard d’or). This unique animal iconography belongs to Jean Chardalle of Marville, (Johannes Chardallus in Latin) who served as Canon of the Cathedral of Metz from 1475 to 1502. Described as a “noble seigneur d’Église, homme sage docte et scientifique personne” by the contemporary chronicler Philippe de Vigneulles, Chardalle was a prolific book collector, and around thirty-five incunables and fifteen manuscripts have been identified as belonging to him by Pierre-Édouard Wagner.2 This copy of the City of God represents a new addition to this impressive tally, and is all the more important owing to the devastating loss of nearly half of the Municipal Library of Metz’s manuscript and incunable holdings during the Second World War, incuding many books that had belonged to Chardalle. This is indeed a case where prior dispersal has led to survival.

Among the incunables Chardalle owned, most are Italian and bear Italian decoration. Chardalle presumably purchased these on ecclesiastical trips to Rome. The style of the roundel in the City of God is also Italian, contrasting with the Parisian initials. It closely resembles the heraldic devices on other books he brought back from Italy, for example two separate texts by Juan de Torquemada, a Commentum in psalmos David (Verdun, Bibliothèque municipale, MS 84), and a De potestate Ecclesia (Metz, Bibliothèque municipale, MS 104). The evidence from our book suggests that Chardalle purchased extra versions of his coat-of-arms while abroad for insertion into his books. 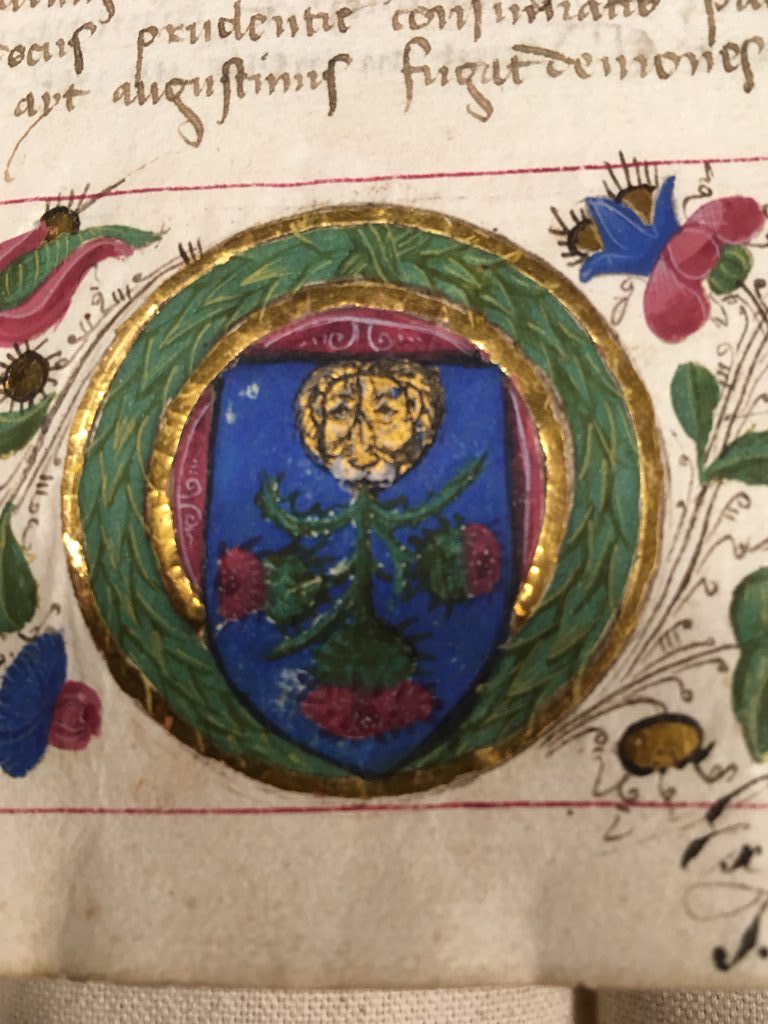 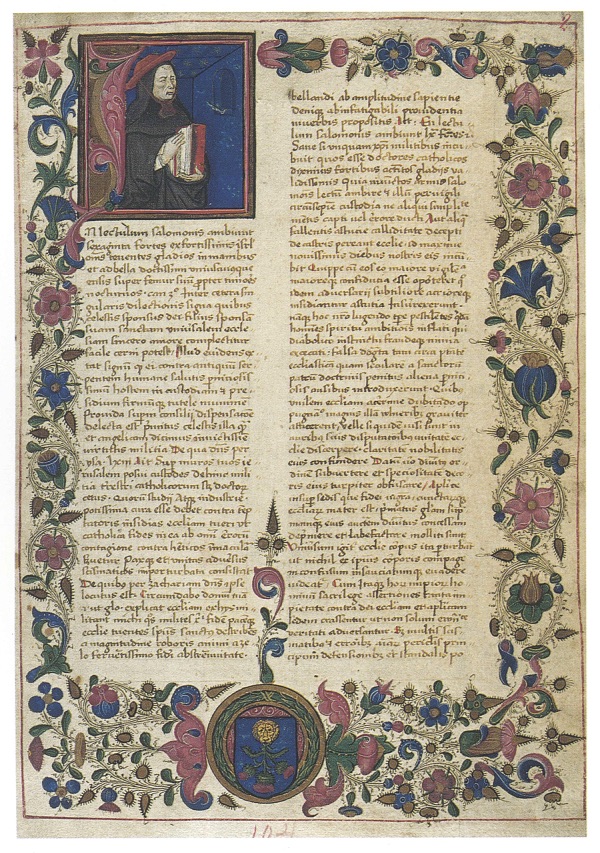 Though most versions of his coat of arms show five thistles issuing from the Leopard’s mouth (the word for thistle in French is chardon, a play on his surname), here this feature is absent. The same is true of the arms in a fine manuscript copy of Augustine’s works (comprising the Meditationes, Manuale, Enchiridion, and De fide, but not the De civitate dei) from the Cathedral Treasury of Metz, where it accompanies a striking image of Chardalle in prayer before the Crucifixion (Paris, Bibliothèque nationale de France, MS lat. 9545, fol. 1r). 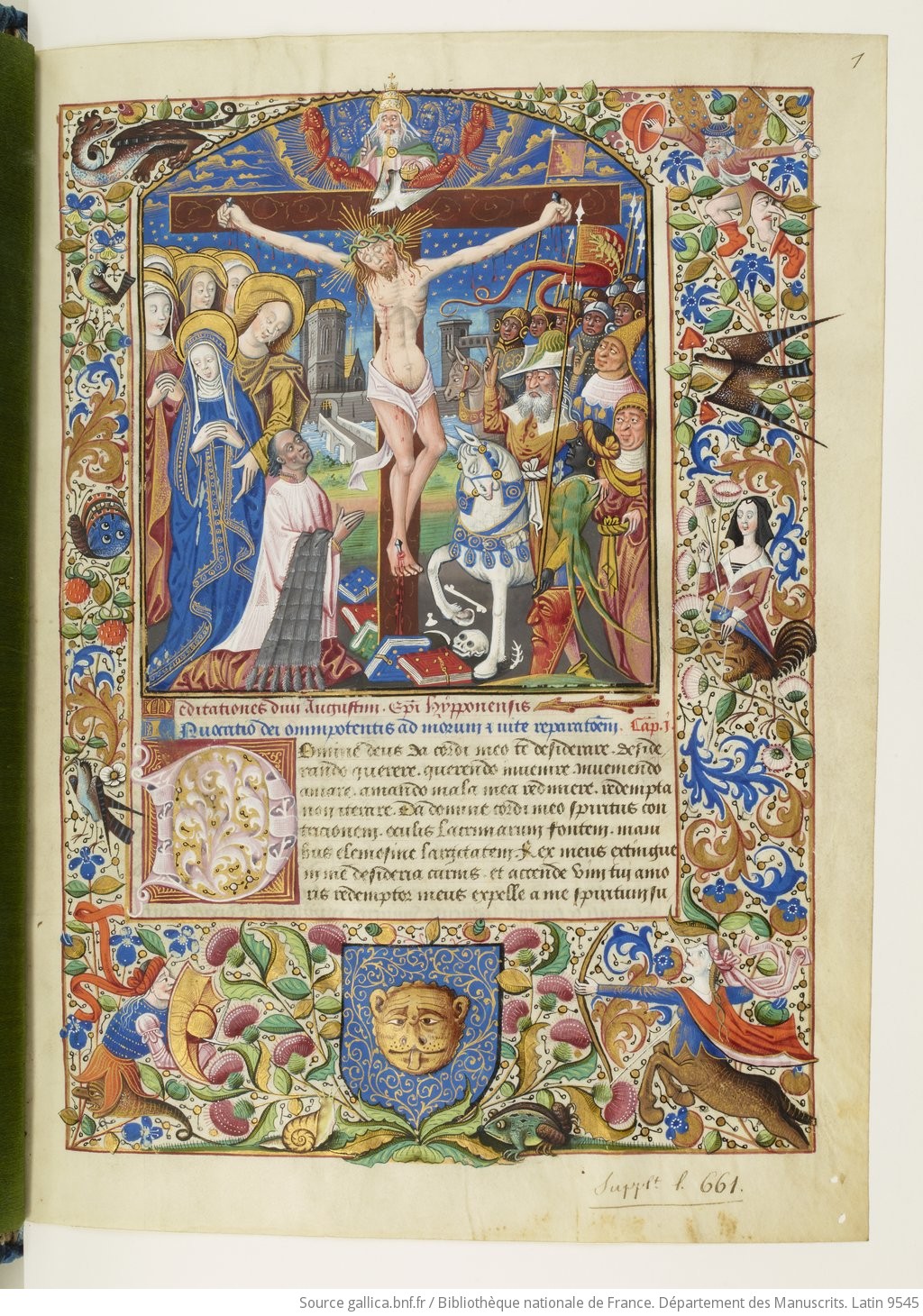 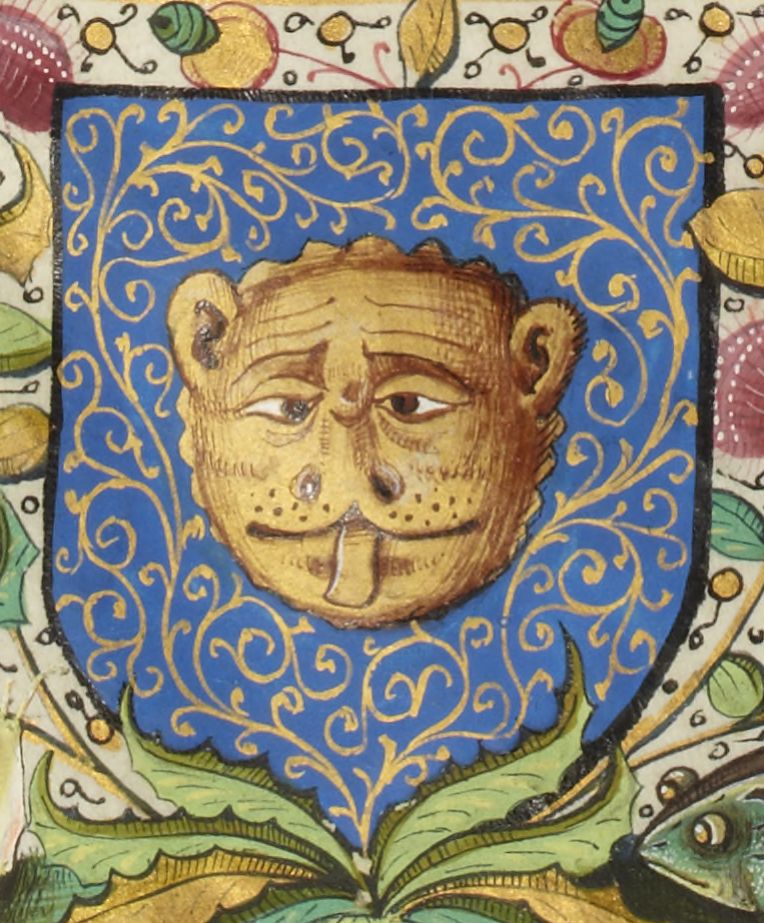