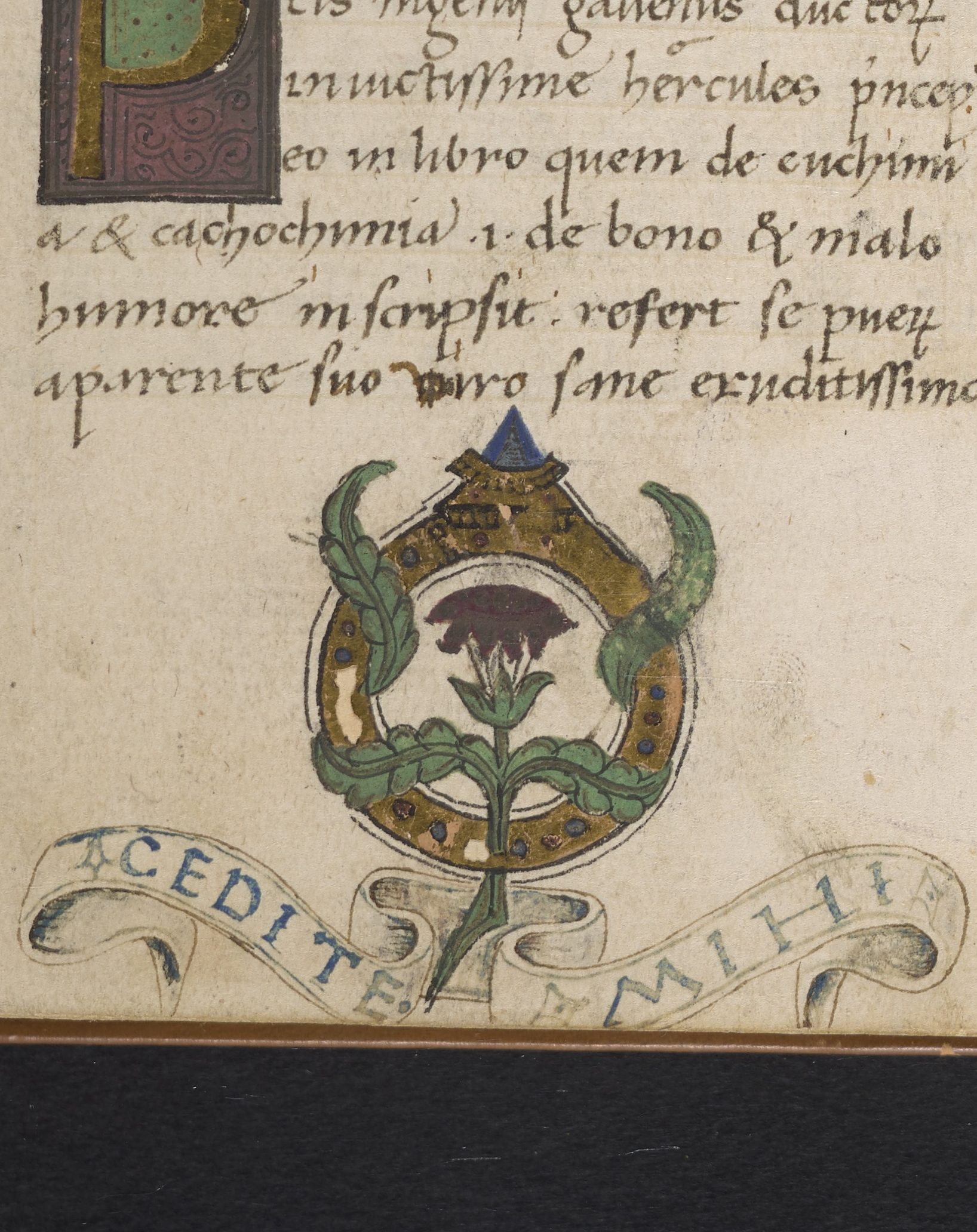 Relatively modest in material terms, the College of Physicians manuscript contains a treatise on edible fruits dedicated to Ercole I d’Este, Duke of Ferrara (1431–1505). It appears to have been personally transcribed by its author, and includes a colophon bearing the date of 10 June 1471. Each chapter is devoted to a type of fruit and its effects on parts of the body, such as the complexion, stomach, kidneys, heart, and brain. The names of medical authorities cited in the text, such as Galen, Avicenna, and Isaac Israeli, are written in the margins in red ink, demonstrating the extent to which classical and Arabic sources remained dominant reference points in physiological studies at the time. The main text (fols. 1r–70r) is accompanied by a shorter treatise on the making of barley water (fols. 70v–76r), dated to 15 June 1471, which is framed as a letter to the theologian Pietro da Trani, also known as Pietro Palagano (later bishop of Lavello and Telese; died 1505). The volume also contains an unpublished epigram dedicated to Massa by Francesco Ariosto (fols. 76v and 79r), and a table of contents for the main text on a bifolium that may have originally preceded it (fols. 79v–80r).

The only other surviving manuscript of the text is the copy now in Ferrara, mentioned above. That version contains three texts: two dedicated to Ercole and the third to Pietro da Trani; it bears the dates 1472 and 1473. As Peter Kidd has shown, it is likely that the Philadelphia copy of the text served as the basis for the sole printed edition by the so-called Printer of Ausonius, which is undated but was likely made soon after the completion of the present manuscript. Kidd has also linked the present manuscript with an entry in the inventory of the d’Este ducal library from 1495: “Baptista darzenta de fructibus in latino coperto de brasilio stampato in latino stampato” [sic].2 An earlier inventory of Ercole’s vernacular books records the two volumes, one as “De le condizione e proprietate dei fructi composto per Batt. a M. a Massa de Aregenta,” and the other as “de li Veneni.” The entry for the latter was marked as given to Ercole “da massa medico” on 20 September 1472.3

The uniqueness of the Philadelphia copy is made clear by the presence of a distinctive design on the lower margin of folio 1r: a single-point diamond ring with an interlaced thistle. This is the famous emblem of Ercole d’Este, and it is found on many objects produced during his reign as Duke, from coins to the very facade of the famous Palazzo dei Diamanti in Ferrara. It was even added to the famous Bible of Borso d’Este, when the lavish book was inherited by Ercole from his half-brother. 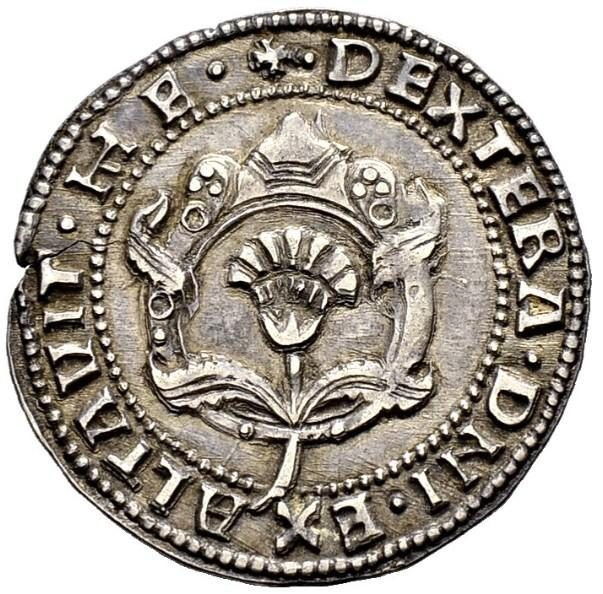 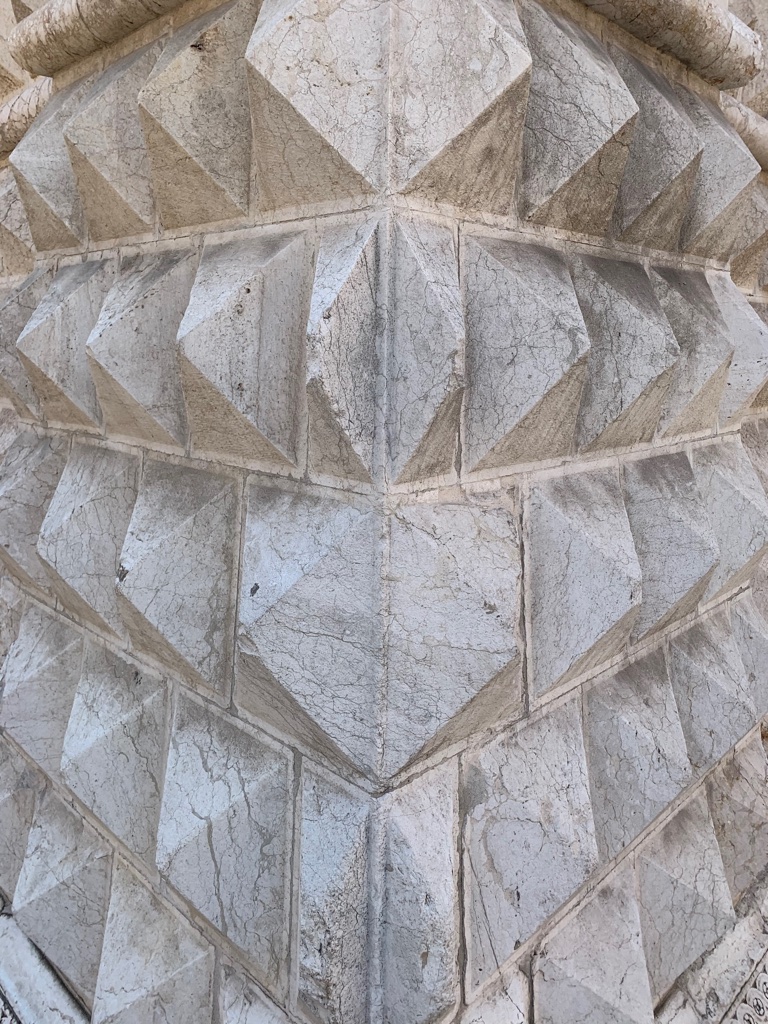 One small, hypothetical element could be added to bolster the notion that this manuscript was in fact the presentation copy. The banderole below the emblem, which loops around the stem of the thistle, bears an unusual motto: “CEDITE MIHI” or “give in to me.” The blue script in which these two words are written—which matches the style of the dedication rubric at the top of the page—and the way the scroll loops around the emblem suggest it is original to the manuscript. However, “cedite mihi” cannot be found among the many emblems, devices, and heraldry associated with Ercole d’Este. Therefore, rather than interpreting these worlds as a motto, they might be better understood as a request on behalf of Massa de Argenta himself, for the new Duke to accede to his request to be appointed court physician. The presentation of a finely-written copy of a unique work, dedicated to a potential princely employer, is a widespread phenomenon among the courtly cultures of fifteenth-century Italy: we have already seen it in the beautifully illuminated copy of a treatise on cyphers that Michele Zopello presented to Pope Callixtus III. Here, Massa de Argenta may have underlined his desire for a reward with the addition of a scroll with these two straightforward words.