A striking miniature of Bathsheba illustrates the Penitential Psalms. The “Three Living and Three Dead” iconography prefaces the Office of the Dead. Finally, the first suffrage, dedicated to the Trinity, is illustrated with a somewhat unusual depiction of an isomorphic God the Father, God the Son, and God the Holy Spirit, surmounted by a shared, lobed crown. Who painted these minute masterpieces from the early sixteenth century? While we might not be able to identify the person by name conclusively, the artist’s hand is identifiable in a large corpus of illuminated manuscripts. The miniatures in our book are practically identical in style to those of the so-called Master of the Entry of Francis I, the anonymous illuminator so-named after a manuscript now in Wolfenbüttel, Germany, and which contains fascinating illustrations of temporary “tableaux vivants” set-up by the citizens of Lyon throughout the city to greet the French King in July of 1515 as he embarked on his first military campaign to Italy (Herzog August Bibliothek, Cod. Guelf. 86.4 Extrav.).1 These ephemeral civic displays were an important part of late Medieval and Renaissance ceremonial culture, and high-ranking artists were often called upon to assist in planning and organization.2 The artist was active in the city of Lyon from about 1485 to 1515. While he remains anonymous, Elizabeth Burin suggested that he may be identifiable with the documented scribe and illuminator Antoine Pingaud.3 Tania Lévy, on the other hand, posited that he might be one and the same with the glass painter Jean Ramel.4 To-date, some twenty-five manuscripts containing his work have been identified, including thirteen books of hours. Miniatures in a further Book of Hours, currently with Les Enluminures, may be by members of his workshop. The Lehigh manuscript represents a new and exciting addition to this substantial body of work. 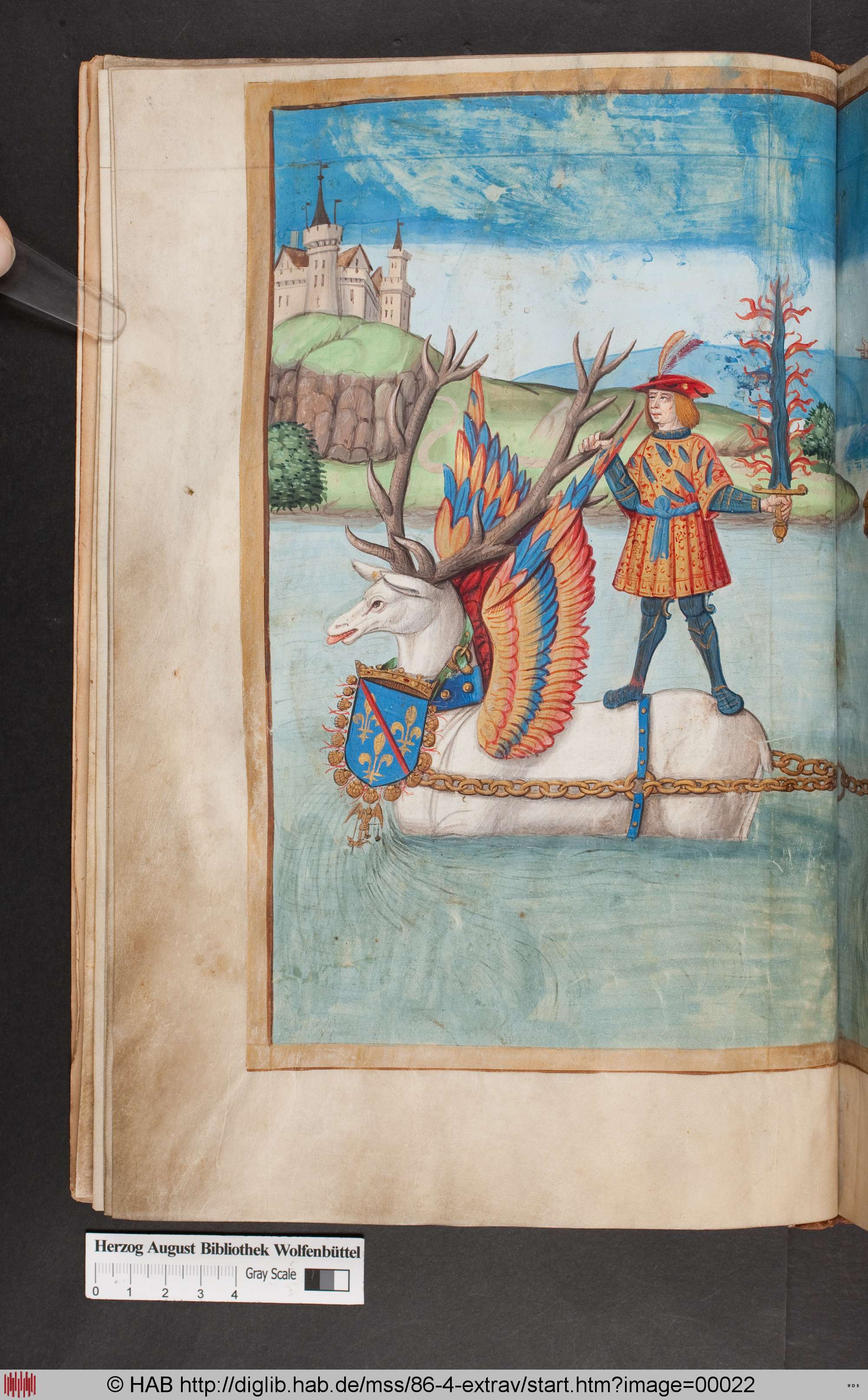 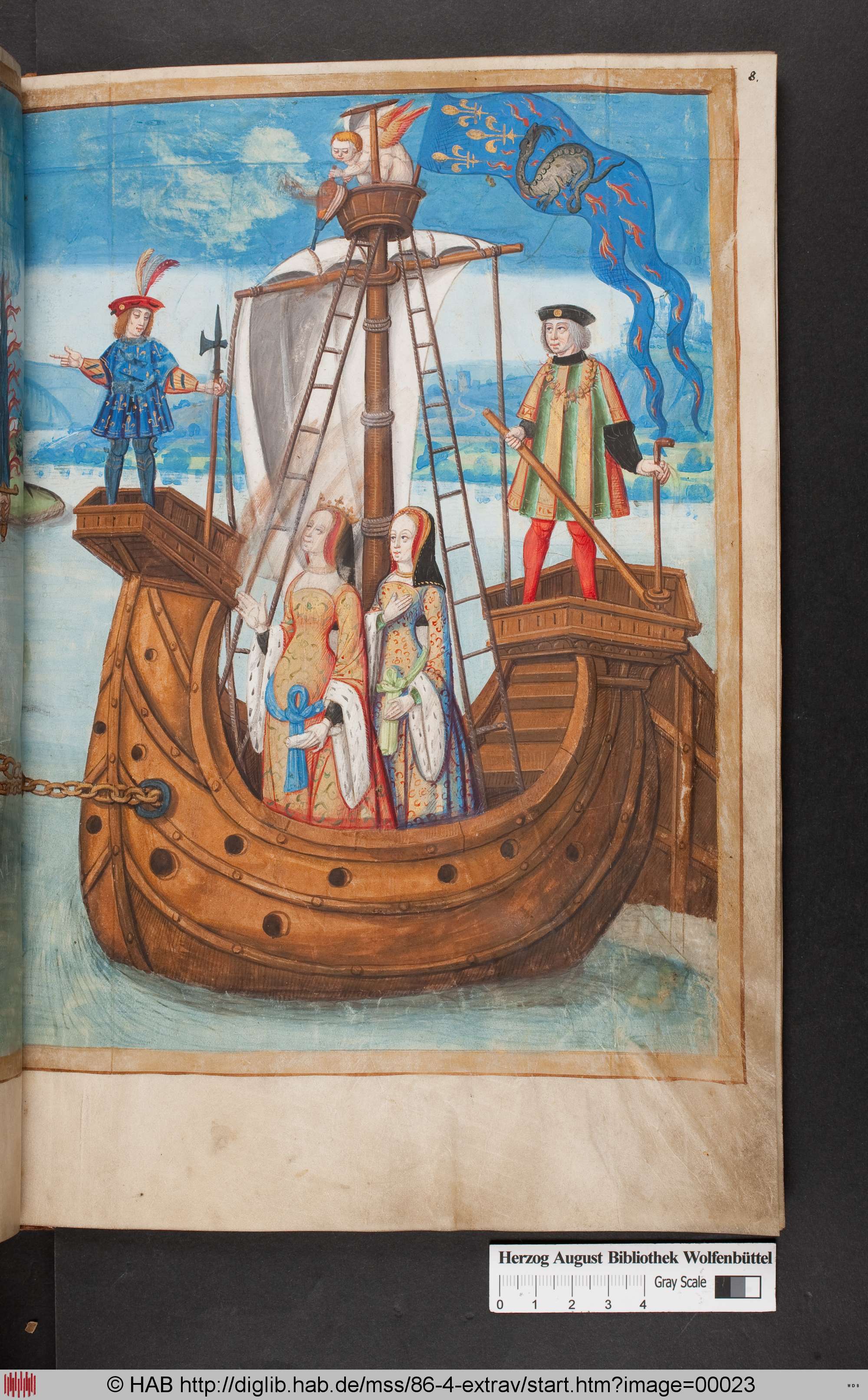 To get to know the artist’s style, it is best to look first at his eponymous manuscript. The most memorable image from the Wolfenbüttel codex extends across two pages and shows a magnificent “Ship of State” in the waters of the Rhone, an allegory for Francis’ reign. On the left, Charles III of Bourbon is astride the winged stag with his flaming sword, leading the warship, which is in turn commanded by the young king from the forecastle.5 Riding as passengers are the Queen, Claude of France, and her sister Renée. Steering the ship from the poop deck is the Marshal of France, Jean Jaquez. A divine putto, Zephyr, fills the sails with a bellows from the crow’s nest. Obviously, this remarkable image is highly specific and doesn’t lend itself easily to stylistic comparison. But other images within the book allow for a closer comparison to the somewhat more commonplace iconographies found within the Lehigh Book of Hours. 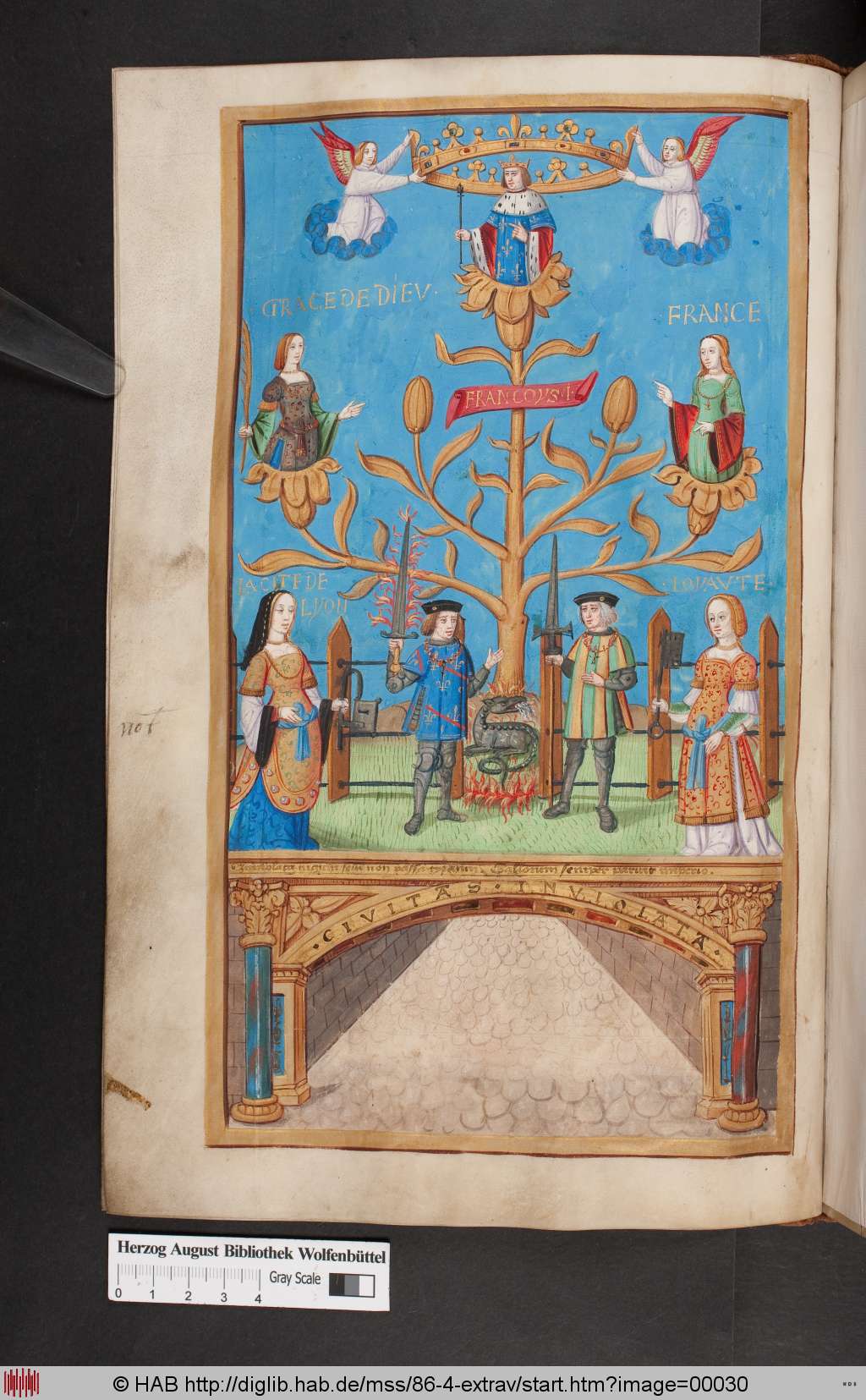 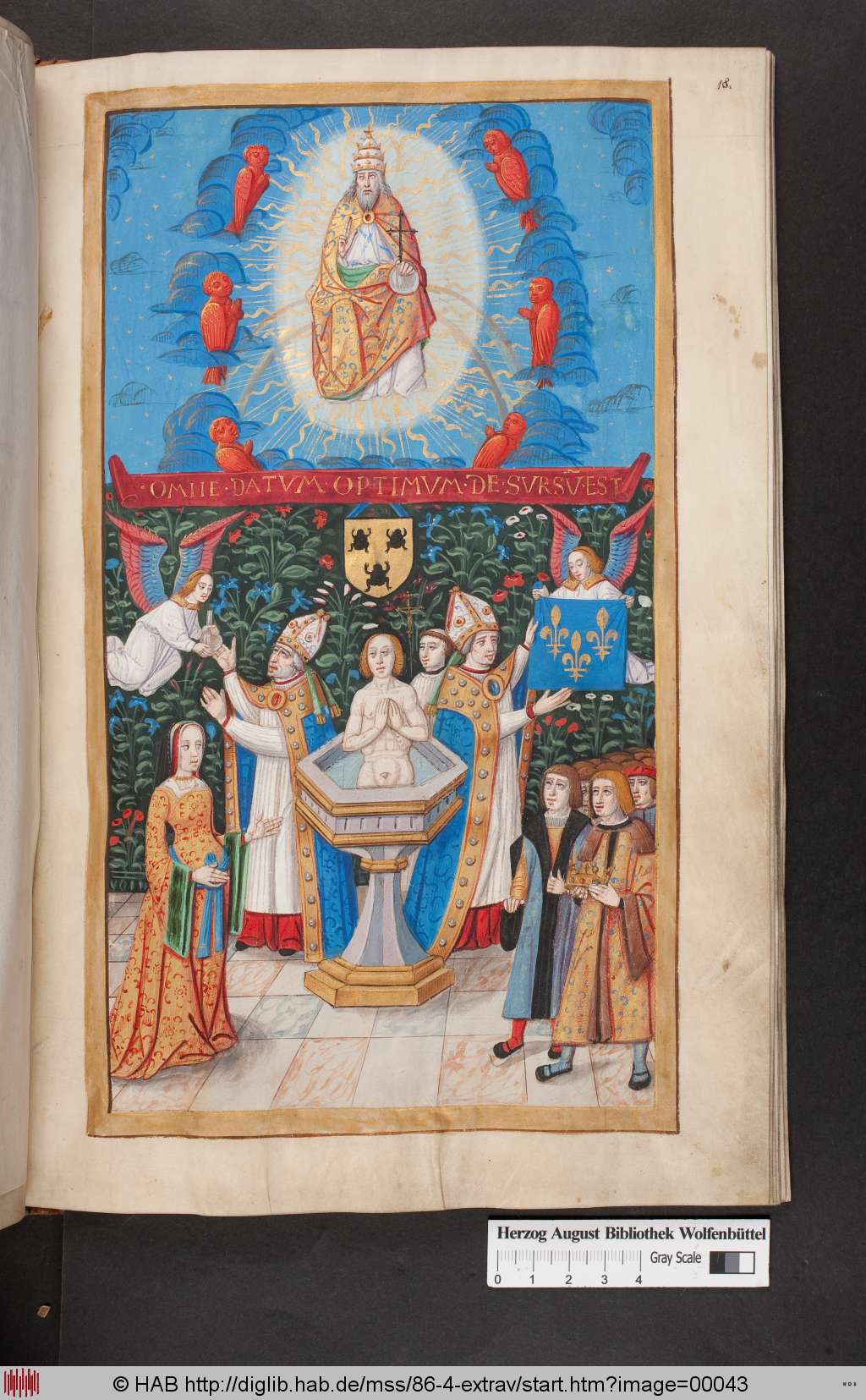 A detailed comparison of our image of the Trinity with the blessing God the Father from folio 18r of the Wolfenbüttel manuscript, for example, shows an identical approach the facial construction, with straight eyebrows, a long vertical stroke to shade the right side of the nose, askance eyes, beards underscored by a black line on one side only, etc…. Note the identical design of the emanating gold rays as well. Clearly, we are dealing with the same painter, perhaps only a few years apart. 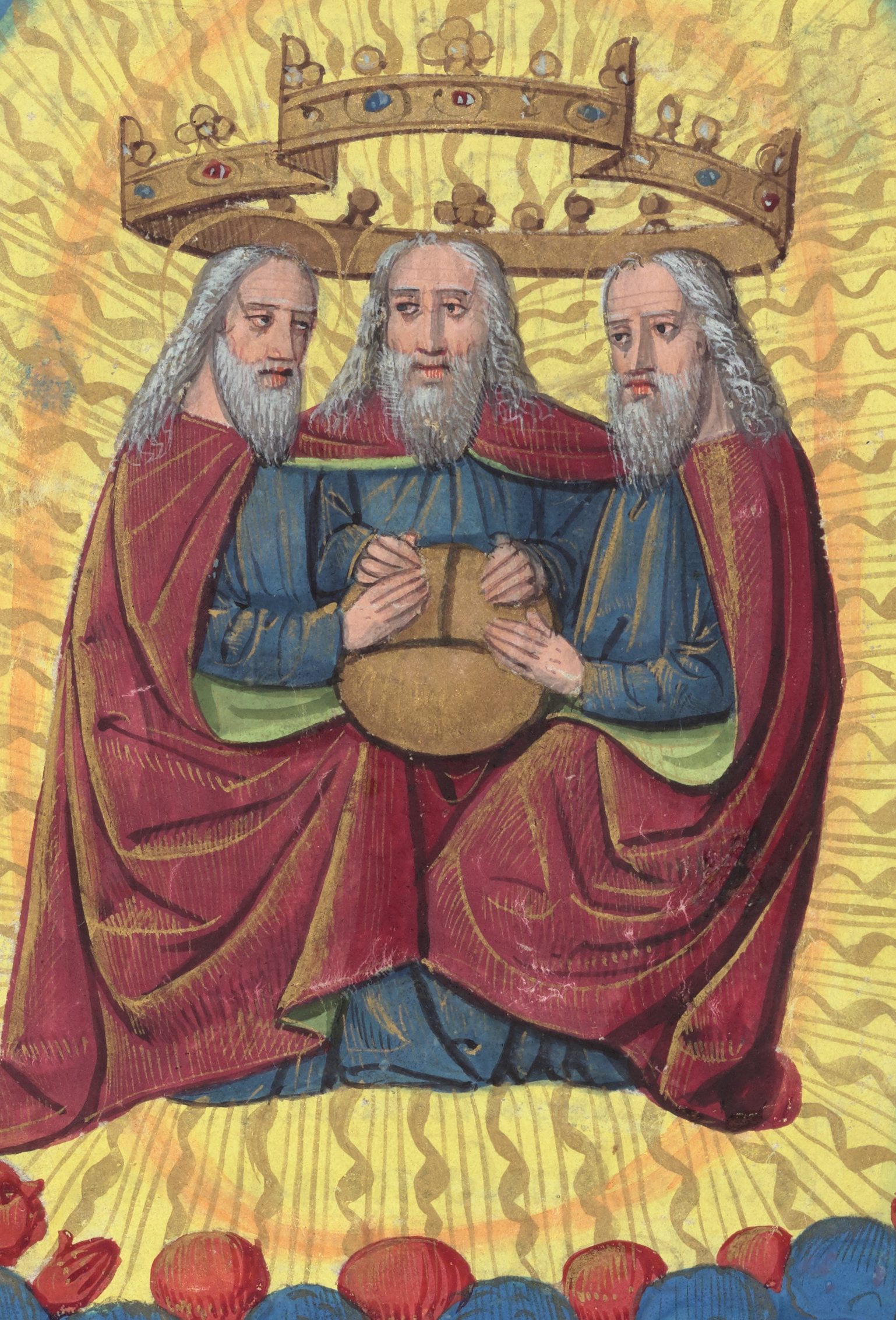 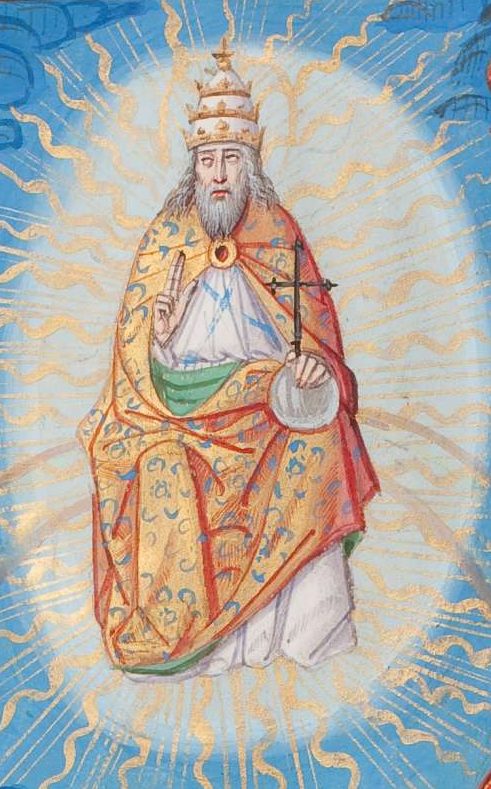 Another stylistic comparison, this time with a Book of Hours by the Master of the Entry of Francis I today in San Marino (Huntington Library, HM 1181), shows marked similarities between the two Annunciations. While they do not follow exactly the same model (our manuscript shows a kneeling rather than sitting Virgin Mary), the similarities are indisputable, right down to the colors of the floor tiles, the textiles of the canopy, the gold highlights on the virgin’s robe, the angel Gabriel’s brocade, and the view through to the green space beyond. Note also how the stylish frame in the San Marino Annunciation echoes elements from several of the frames in the Lehigh book, albeit in a different combination. 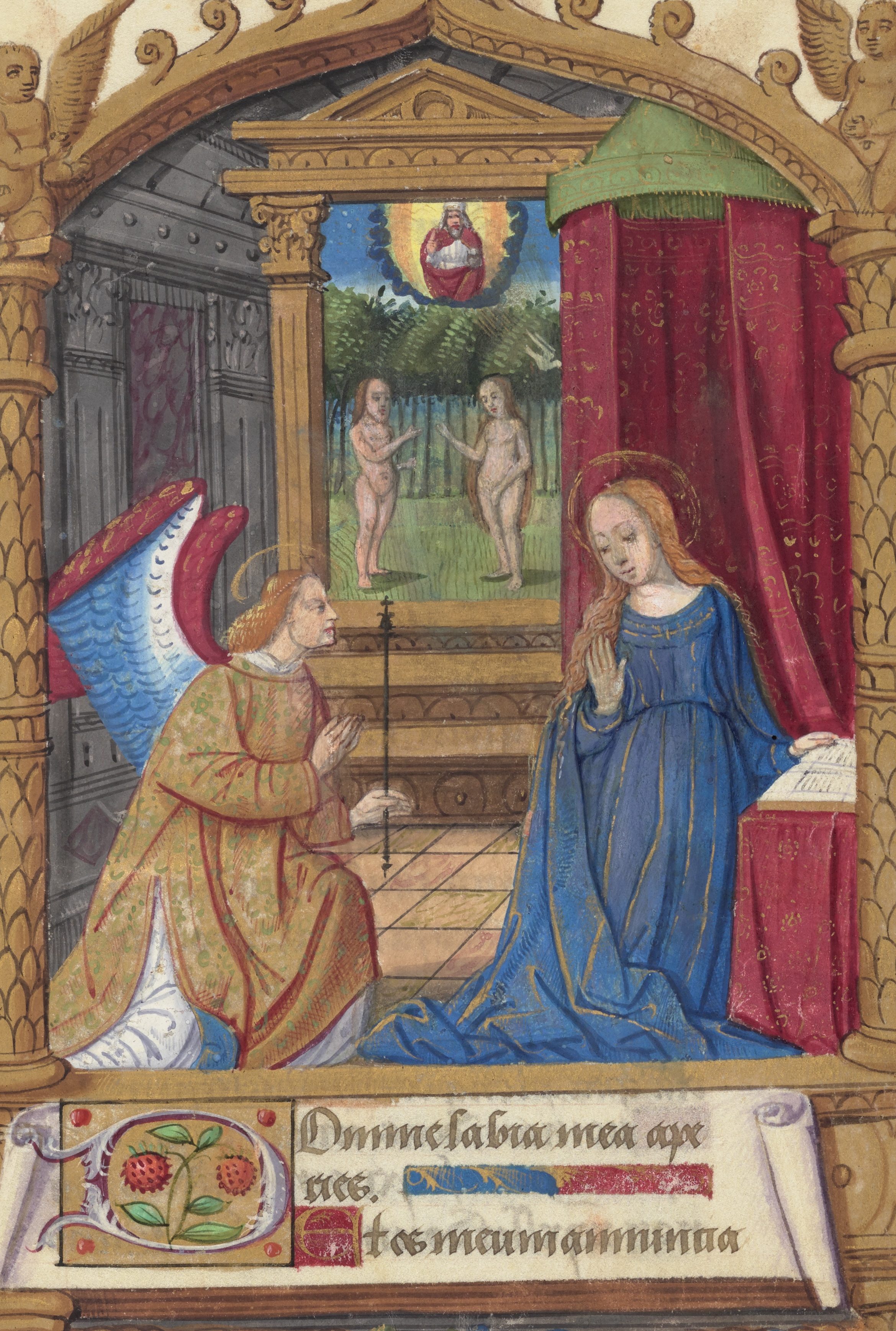 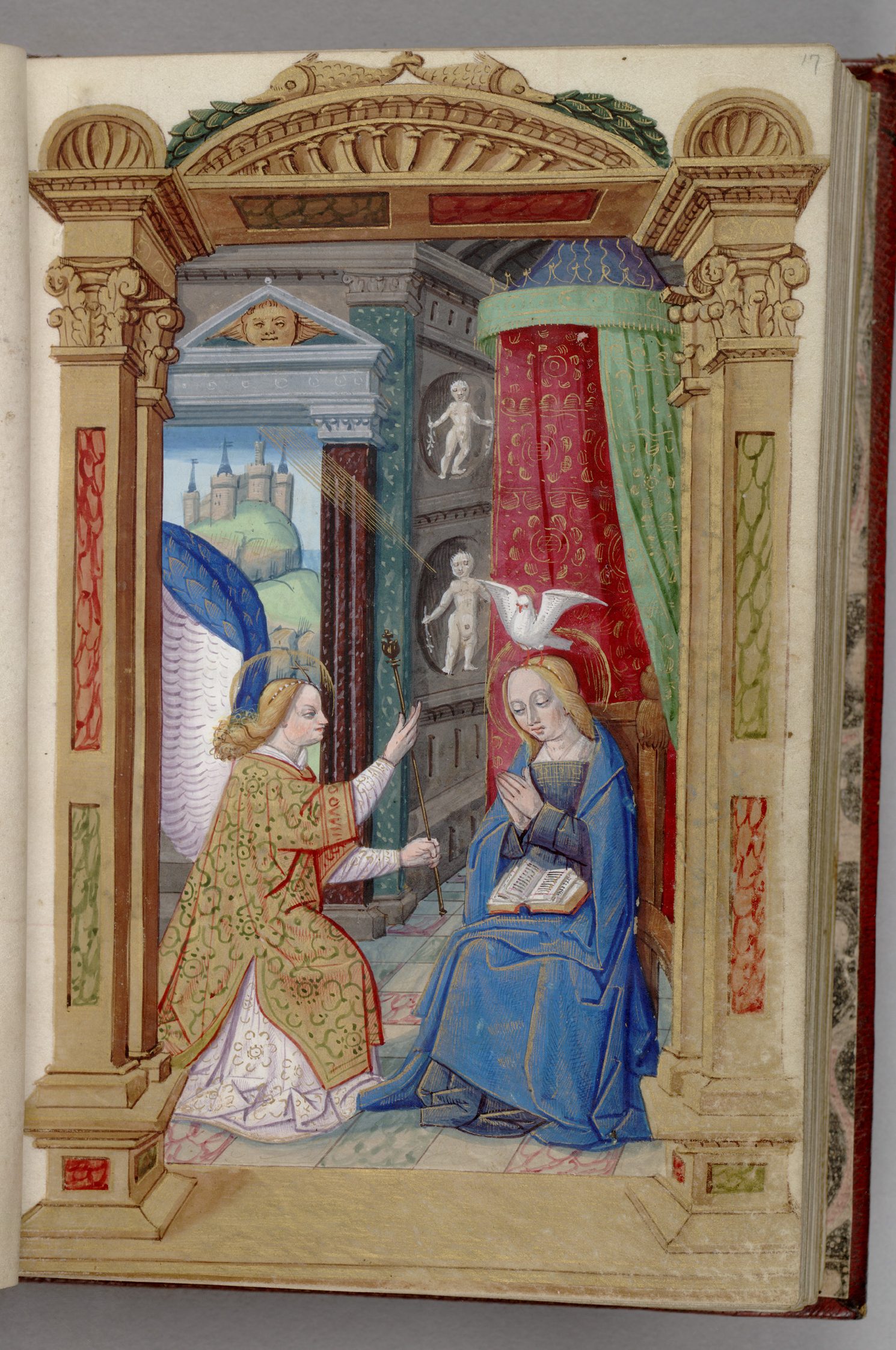 Though we know much about the artist’s œuvre, if not his name, Lehigh Codex 18 provides no secure evidence as to the identity of its original owner. Though the book’s much more recent red velvet binding is decorated with elaborate filigree mounts incorporating the niello arms of the great Italian scholar, poet, and prelate Cardinal Pietro Bembo (1470-1547), these are likely a spurious nineteenth-century addition. Thus, the manuscript and its miniatures provide a good illustration of how patient art-historical connoisseurship and stylistic analysis can often help us understand a context that is all but unrecoverable through other means.